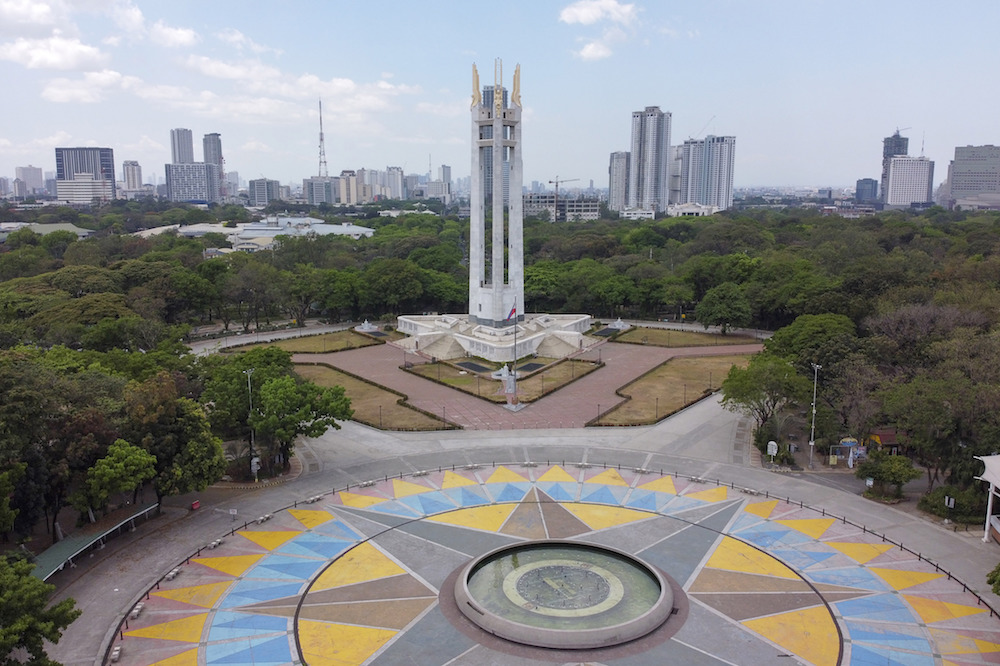 The popular Quezon Memorial Circle park is now empty following the enhanced community quarantine enforced by the government to prevent the spread of COVID-19. Courtesy of Aaron Favila/Associated Press.

It’s amazing how much more you’re able to see when you can’t go wherever you want.

We’re now more than six weeks into the “enhanced community quarantine” for Luzon. Just as the Milky Way is an archipelago of stars, the Philippines is a nation of islands, with Luzon being its largest. I live in Quezon City, on the northeast side of greater metropolitan Manila.

As I’ve learned to live the life of a recluse, my vision has improved—I see more clearly my own neighbors. I can see more of those Milky Way stars in the newly clear sky. And I more clearly see myself.

For weeks, I have kept to a simple routine. Wake up at five a.m. Attend to personal needs and do some exercises. Have coffee while surfing the internet, then eat my breakfast and have some social-distanced conversations with family, before heading back to the laptop and modern multi-tasking. I work with an NGO called Institute for Political and Electoral Reform, which is collaborating with Congress and the executive on constitutional reforms. And so I write papers and articles; attend to my emails, Facebook posts, and Viber messages; and sometimes join a Zoom conference with colleagues or have a phone patch interview if the media calls. In between such work, I have fun with video games or watch a Netflix movie or a YouTube video.

After lunch, I try to get in a nap. Then at four in the afternoon, as temperatures drop into the 80s, it’s time to monitor the update from the government on the COVID-19 situation. These updates are fascinating, covering the march of the pandemic across our country and changes in government policy, with an emphasis on the enhanced community quarantine here on Luzon. Afterwards, I have an early supper, then head back to my refuge of reading books and watching TV, before heading to bed for at least six hours.

This routine at first was voluntary and precautionary. I chose to seclude myself because I’m 64 and have some health issues. But recently it became stricter, as the unseen virus insinuated itself into our subdivision. A confirmed COVID-19 case was found right next door.

She is a doctor and she was infected in the hospital, right along with the head of the health unit, who died. She underwent hospital treatment and survived; she was able to come home just the other day.

In the meantime, her family members were considered Persons Under Investigation (PUIs), a euphemism for people who had a history of travel to virus hotspots or were in contact with confirmed cases. Protocols kicked in—the whole household was put in quarantine, and barangay (village) health workers started monitoring the occupants and bringing them food.

The authorities also stationed a 24-hour watch on our street to prevent people from roaming around outside. Authorities issued one quarantine pass per household to permit departures. And only one person per household was allowed to go out to purchase food, go to the bank, or to buy other necessities.

Suddenly, sticking to my indoor routine became a requirement, and a deadly serious one at that. According to the protocol, my age meant that I should not leave the house at all. There went my outdoor exercise, which consisted of walks and jogs within the subdivision. Now I’m limited to walking up and down the stairs and doing calisthenics on the third-floor balcony.

One luxury does allow me to get around: I have a service car from the office. With it, my driver and I are able to go out and see for ourselves what life is like in the region, as long as we stay in the car. This has allowed me to see the nearby neighborhoods with new eyes.

Manila is one of the most polluted cities in the world. In normal times, one can barely discern the Sierra Madre mountain ranges to the east of the region, or the Bataan Death March cross that sits atop Mount Samat in the west. But thanks to the coronavirus and the quarantine, the skies have cleared up, and air has freshened up. And I can see these landmarks, sharply and clearly, from the subdivision.

The village outside my subdivision is a relatively poor community with a lot of informal settlers eking out a hand-to-mouth existence as vendors, tricycle drivers, small shopkeepers, or itinerant workers. In normal times, such people may be easily ignored and dismissed. But now that they must stay inside, I see a void where a wealth of human interactions and enterprises once filled the street.

Today, the village still teems—but with barricades and checkpoints, standby ambulances, and police and barangay tanod (village watchers) who implement an Extreme Community Quarantine (ECQ). It’s extreme because the village has the unenviable status of having the highest number of confirmed cases in the whole city. It has become a COVID-19 hot spot.

This depressing reality is not just local; it’s our new normal. Authorities have just announced the extension of the month-long quarantine of the whole island of Luzon until May 15. Even if the quarantine is lifted by then, authorities are speaking of a gradual return to normal economic activity, with lots of precautionary measures until the pandemic is over and we have a vaccine. President Duterte himself predicts a two-year process.

Adjusting to this reality, I’ve turned inwards. I’ve taken stock of my priorities; I’ve found that I could do without unnecessary things in life, like electronic gadgets, and have seen how much I need human relationships. I already feel like I have new priorities—family affairs and legacy work that will survive me.

Many experts here in the Philippines—economists, political analysts, social scientists—are forecasting direr things to come in the aftermath of the COVID-19 pandemic. Among these are slower economic growth, even a recession, far from the Philippines’ consistently six-percent annual growth in gross domestic product (GDP) for the past 10 years. In my middle-class subdivision, my neighbors whose businesses are tied to the globalized economy could feel the strongest impacts; in the villages outside the subdivision, those with poverty-level jobs in the formal economy, which also has global ties, are most likely to suffer.

Some are saying a political crisis is in the offing, particularly if the nation’s leadership is perceived to have bungled the pandemic response and if the people find the new hardships unacceptable. We have crucial presidential elections in 2022, an active rebellion, and a restless poor.

It is too early, I think, to dwell on those things until we have “flattened the coronavirus curve” and decisively defeated it. The time to take stock of the damage to the country and assess the probably profound impact on our lives is still in the future.

But my favorite pleasure is that of the sky above. Manila is one of the most polluted cities in the world. In normal times, one can barely discern the Sierra Madre mountain ranges to the east of the region, or the Bataan Death March cross that sits atop Mount Samat in the west. But thanks to the coronavirus and the quarantine, the skies have cleared up, and air has freshened up. And I can see these landmarks, sharply and clearly, from the subdivision.

I find myself thinking back to my boyhood days in the provinces, when communing with nature was the norm. Could the future be more like that? I savor the pleasurable leisure of looking at the night sky in the evening. Now, despite the glaring city lights, I can see the planets and even the faint smudge that is the Milky Way. And it is full of stars!