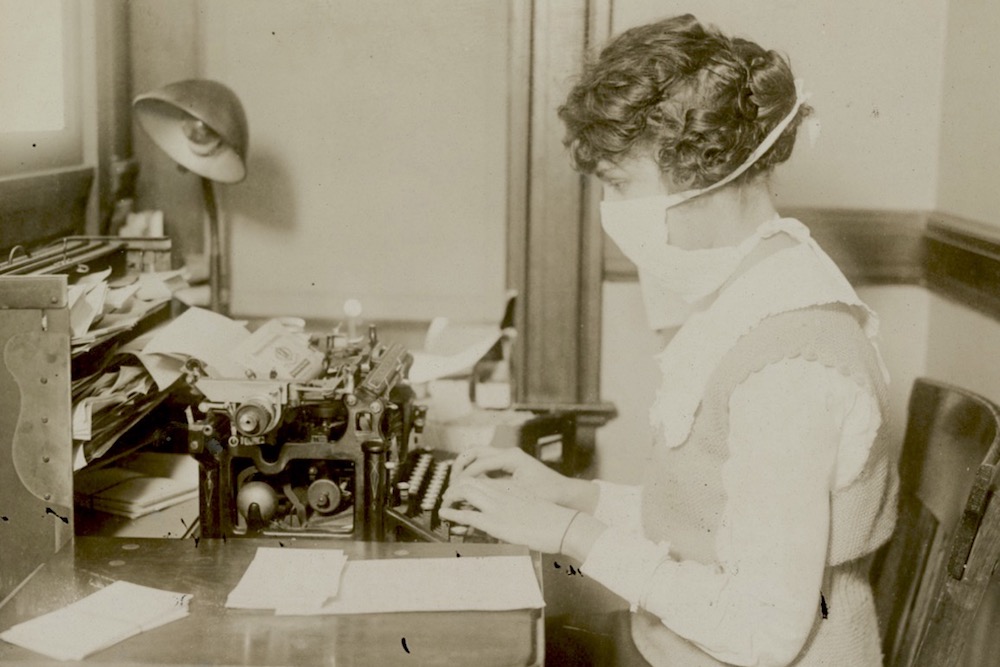 A typist wearing her influenza mask in 1918 New York. Courtesy of the U.S. National Archives.

Early in the coronavirus pandemic, as society shut down and social distancing became the new norm, user-created media content about life during the pandemic exploded. Today’s technology makes it easy to produce and share such messages with the world. However, expressing what life is like in a pandemic through available media is nothing new. Writings about disease—poems, prose, songs, and quips—have long flourished during epidemics, as people have struggled to emotionally and physically adjust to isolation, sickness, and death. Sometimes such writings have been serious; just as often they reflect a darkly hopeful sense of humor. In the past this content was more difficult to distribute than uploading to Instagram or TikTok, but it too made its way into the media of its day—and the feelings it conveyed seem remarkably familiar. 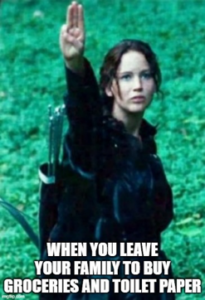 Created by SusanKny. Courtesy of imgflip.

In 1918, a flu virus spread around the world in a matter of months and killed an estimated 50 million people before fizzling out in 1919. The few surviving photographs of the 1918-19 pandemic primarily feature rows of beds in makeshift hospitals and the masked faces of doctors, nurses, barbers and other workers. Documentaries, fictional films, stories, and images paint the Spanish Flu as a solemn crisis. But this collective memory of the Spanish Flu offers little insight into everyday life. We forget how people lived through the 1918 pandemic: through isolation, the temporary closure of schools and businesses, the proliferation of illness and death, the cancellation of sports. And we forget that levity can exist in even the most dire circumstances.

Take, as an example, poems everyday people wrote about the Spanish Flu, which were published widely in local and national newspapers. Media of the time labored under the close watch of World War I media censorship, which aimed to curb public dissent. However, newspapers did frequently publish poetry, providing an outlet for regular people to submit their work and vent their frustrations. Some papers contained specific pages for humorous pieces, “odd” facts, and anecdotes. Others placed poems in the midst of local or national news.

In 1918, like today, a lot of people thought the threat was overblown. A writer for the Vancouver Daily World, for example, published a poem that satirized widespread perceptions that influenza had been overhyped, interspersing lines such as “I think it is nothing but grippe—” and “But just a big scare” with onomatopoeic bouts of sneezing and coughing. During that pandemic, as today, health authorities asked people to combat the spread of the virus by wearing masks and avoiding crowds. And then, as now, people didn’t much like it.

As public health authorities encouraged, and sometimes required, people to cover their faces, mask humor emerged in print. Many of the jokes were highly gendered: The Bismarck Tribune printed, “Every woman secretly believes she would be fascinating in a harem veil. Wearing a flu mask is a good, safe way to try the effect.” Similarly, a writer for the Jasper Weekly Courier quipped, “‘Flu’ masks improve the appearance of many men, but when worn by women, they take much of the joy and beauty out of life.” While our collective memory of 1918’s Spanish Flu suggests that people universally cooperated with quarantines and mask-wearing, this poetry tells a different story.

Writings about disease—poems, prose, songs, and quips—have long flourished during epidemics, as people have struggled to emotionally and physically adjust to isolation, sickness, and death.

“Social distancing” did not exist as a phrase, but manifested in concept as communities shut down public spaces. Many people writing about the flu took a personal approach, lamenting all the things they were missing. In “Flu Bound,” children’s author Edna Groff Diehl griped about this new reality:

The street crowd surged—but where to go?
The bar? The concert? Movies? No!
Old Influenza’s locked the door to Pleasure Land.
Oh what a bore!

Similarly, Jesse Daniel Boone published his poem “The Spanish Flu May Get You, Too” in his own newspaper, the Carolina Mountaineer. He described the quarantine, “This old world is in the lurch; For we cannot go to church; And the children cannot roam, For they now are kept at home, And they’ve put a good, strong ban on the moving pictures, man,” In the Greenville News, the first stanza of the very relatable poem “Spanish Flu” read:

Oh, we are quarantined, I guess
For ‘bout a million years
But if we don’t get out of here
We’ll burst right out in tears

One thing that the pandemic could alter, but not stop, was the First World War. As an October 23 “Wavelet” in the Evening Telegram stated, “The Kaiser and the Flu are running neck and neck in the world’s popularity contest.” The pandemic did not spare the military and many enlisted men became ill before ever leaving U.S. soil. A “local boy under quarantine at Naval Station” (John Culberson) began his poem, which also ran on October 25, in the Chattanooga News,

There’s a war going on in Europe,
So I’ve heard from newspaper talk;
But the only one I’m having
Is with influenza at the park

Culberson went on to contrast his expectation of combat with his reality of isolation at a naval training station in San Diego, concluding,

So, mother, take down the service flag—
I’m quarantined at Balboa Park

In October 1918, the war and pandemic together had halted professional baseball and football. With nothing to report on for his “Looking ‘Em Over” column, Washington Times sportswriter Louis A. Dougher created a mock line-up, featuring disease-stopping tools as players: “Fresh Air” as “tackle” and “Quinine” as “quarterback,” with the team rounded out by Antiseptic, Ice Pack, Gargle, Alcohol Rub, Castor Oil, Mask, and Sleep. Dougher concluded, “It is not believed that any team would have stopped so many others as has Spanish ‘Flu’ within the past month … Its record will stand for years.”

Influenza impacted other social activities as well, including courtship and dating. Edgar Leslie, Bert Kalmar, and Pete Wendling’s song “Take Your Girlie to the Movies If You Can’t Make Love at Home” recommended the theater for courtship, that a couple should “Pick a cozy corner where it’s nice and dark. Don’t catch influenza kissing in the park.” In “A Spanish Flu-Lay,” a writer mourned for his lost romance when his desired woman became ill: “But soon perhaps the flu will go, And masks be put away, And all the bills Dan Cupid owes, On ruby lips he’ll pay.”

Like those of us who wonder if every throat tickle is COVID-19, individuals in 1918 always felt on the look-out for the first sign of disease. In “The Last Wheeze,” Edmund Vance Cooke laid out this paranoia in the Washington Herald: “When you have appendicitis, parenchymatous nephritis, laryngitis or gastritis, It’s the Flu.” Likewise, the Winnipeg Tribune printed this anonymous poem:

“Everything’s Flu Now!” similarly concluded, “Have you stumped one of your toes? Have you just a bleeding nose? Or no matter what your woes—Spanish Flu.”

For those who did contract the virus, poetic prose conveyed the experience of having the disease, sometimes comically. Newspapers widely reprinted J. P. McEvoy’s “The Flu” from the Chicago Tribune, which began, “When your back is broke and your eyes are blurred, And your shin bones knock and your tongue is furred” and then wrapped up with “Some call it Flu—I call it hell.” Through couplets and various other rhyme schemes, people emphasized the painful persistent cough that “seems cutting like a knife,” as a September 11 Houston Post article “The Worst of It” detailed; a headache equal to “clamped screws on my cranium,” as C. Roy Miller wrote in the Miami Herald on October 24; as well as exhaustion, a lack of appetite, and the impact of fever—alternating between “burning” and “freezing,” according to one Walt Mason, writing in the Coffeyville Weekly Journal on November 21.

In December, when quarantines and mask requirements had been lifted, some people were still getting sick. “Lumberjack poet” Jack W. Yoes sorrowfully wrote in “Marooned,” which ran two days after Christmas in the Vancouver Sun, about missing out on the holiday festivities because he was hospitalized:

But our hearts are right,
And on Christmas night
We’ll jolly along with you,
Despite the pains and aches that come
In the trail of the gol-dinged “flu”

People were clever and creative in how they wrote about the pandemic. Plays on words were common: “What goes up the chimney? Flu!!!,” was published in the Evening Telegram on the October 23, while the Walnut Valley Times poem “Chop Suey,” which ran on November 26, read, “I flew from flu As you said to.” On October 23, the Evening Telegram also printed, “We are not wearing a flu mask, but now and then we meet a gent who makes us wish for a gas mask.”

Such jokes about the pandemic lightened the mood, much like today’s memes and tweets. Through the words influenza survivors left behind, we can relate our own conflicting feelings to theirs—demonstrating the transcending need for creative expression and taking permission to find the light during a dark time.