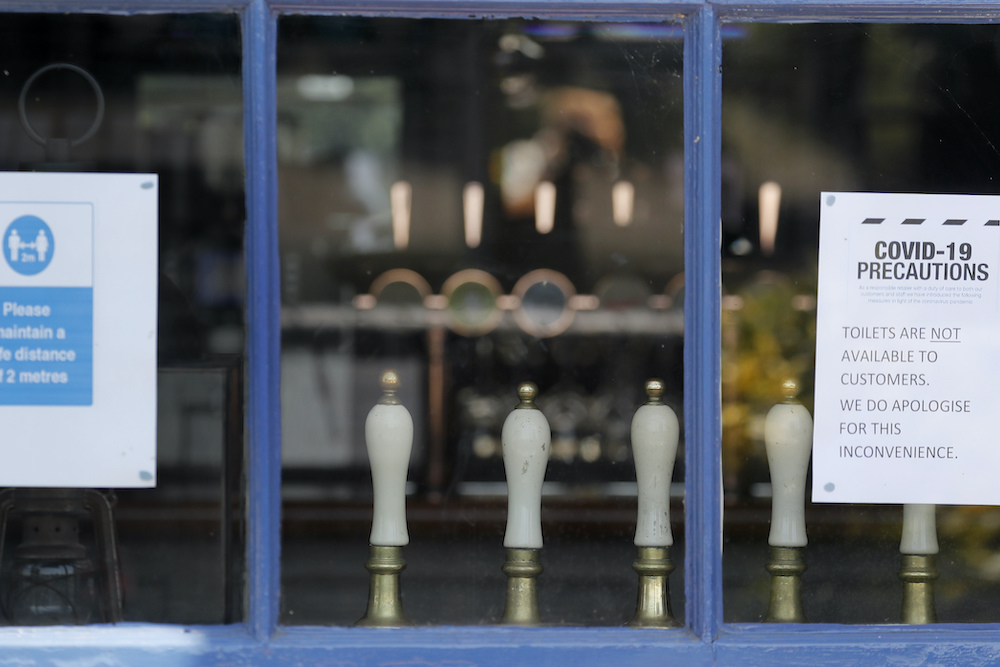 Draft tabs seen through a window of a closed pub in London. Courtesy of Frank Augstein/Associated Press.

It has now been more than 20 weeks since the start of some form of lockdown for Londoners. As we slowly come to terms with the relaxing of restrictions and hesitantly discover which formerly “everyday” activities are no longer on hold (if not illegal), we are also starting to reflect on what has happened to us this year. As a teacher and writer of philosophy, I have been trying to make sense of the situation.

One of my favorite philosophers is Ludwig Wittgenstein, who is widely regarded as the foremost philosopher of language. Wittgenstein was fascinated by how we can share the meanings of words, and communicate with each other, and learn to use language to describe the world and our experience in it. In his book Philosophical Investigations, he said, famously, “In most cases, the meaning of a word is its use.”

Wittgenstein would have been engrossed by the arrival and rapid introduction of terms that have come to dominate everyday discourse in 2020. At the end of last year, words and phrases such as self-isolation, lockdown, and social distancing were all relatively unknown. Now they’ve become the main topics of our conversation. With this comes the realization that, much of the time, what one person means when they say “self-isolation,” for example, is not the same as the meaning that another understands when they use that same term.

Wittgenstein can offer insight into why this might be. The philosopher described language as rule-following behavior; we learn the shared use of a term or phrase through contact with others. What enables us to share a language, Wittgenstein proposed, was not that we formally comprehend grammar and definitions, but that we share the underlying “forms of life” (his famous phrase) that a particular language describes. A form of life can be understood as a way in which those who share a language make sense of the world, their world. Shared forms of life lie beneath language and are what enables us to communicate and understand others.

We are used to acclimatizing ourselves with new terms through a wide range of sources, but many of these opportunities are not available due to the necessity of social distancing. Part of the stress of the pandemic is having to employ a new and evolving vocabulary in our dealings with other people at a time when those interactions are much fewer, and in many instances, radically altered. The terminology that describes and articulates our new situation now often comes to us through news media, official declarations, and electronic communication rather than witnessing the words and actions communicated together, in-person, with real-time approval and confirmation.

Take the words “lockdown” and “self-isolation,” for example. Some friends have considered themselves “in lockdown” while permitting themselves visits to relatives’ homes, family gatherings, a long trip to a distant beauty spot. Others I know have enforced a virtual total exclusion from the world.

Conversations I have both overheard and participated in reveal confusion and conflict: “When you say you are in self-isolation, does that mean you have symptoms?” or “I do wonder sometimes about what certain people consider to be an ‘essential journey’ in the present circumstances.”

Wittgenstein might tell us that these experiences are to be expected in times of rapid change. They are how we come to grips with a new way of living, through social interaction and the experience of submitting our understanding of new vocabulary to the checks of others. “Getting it wrong”—failing to exhibit in our actions a full understanding of the terms used to describe our new situation—seems to indicate carelessness, lack of appreciation at the gravity of our shared situation, and perhaps even selfishness.

As London tentatively emerges from lockdown, the debate over what kind of city its inhabitants want to have, and what they are going to get, will emerge from much discussion. I cannot help feeling that this period of isolation, change, and recovery calls out for reflection and contemplation. Many of us now have only tentative answers to the questions that have started forming within us during these challenging times.

Selfishness—and individuals’ lack of concern for the common good—are a common topic of discussion right now. Recently, British newspaper editorials have directly referred to a betrayal of the social contract, implying that they are identifying not just wrongdoing but the wronging of the rest of us and our efforts to follow rules and contribute our best efforts to this common cause. The concept of the social contract emerged at another time of great social upheaval, the revolutions of the 18th and 19th centuries. Thinkers who influenced this period of history, such as Thomas Hobbes, John Locke, and Jean-Jacques Rousseau, each developed a variant on the concept that citizens of a society agree to surrender some freedoms in order to achieve a greater good which they want and which they understand organized society can provide. Thomas Hobbes described the aim as to be protected from what he described as “war of all against all.”

It is too early to state categorically what the current crisis means for the sense of belonging to society and agreeing to projects undertaken with shared responsibility and contributions demanded of us all. Just as scientists are quick to point out when pressed for hard facts about the future of the pandemic that it is newly encountered and time is needed for research, those of us in the humanities must admit that the changes which will result from this period of history will have to reveal themselves over time.

Confined indoors for much of the time, it has been easy to look on this moment as a temporary pause before a return to “the old normal.” The skies are noticeably clearer, and while walking in my nearby park, the air is perceivably fresher. Roads are clear, trains restricted, empty buses pass. It seems we are already in a new London.

The very circulation of people, now hesitantly emerging from lockdown, is what has historically given strength to London as one of the great metropolitan centers of the world. Richard Sennett, in his book Flesh and Stone: The Body and the City in Western Civilization, noted how the circulation of people in the city underwent a revolution in response to popularization of the discovery of the flow of blood by the physician and medical researcher William Harvey in the 17th century.

Harvey explained how it was the heart (and not the lungs as previously had been believed) which was responsible for blood pumping through humans. This was heralded and explored by a number of thinkers, who (according to Sennett) came to associate rapid and free-flowing circulation with health. Once of these thinkers was Adam Smith, who extrapolated this new image of the healthy human body to argue that the unimpeded circulation of labor and goods was also essential for, as he termed it, The Wealth of Nations.

In the century that followed, the Victorians expanded on this association of rapid circulation of people with the vitality of the city. Improved travel in London did not just mean workers journeying efficiently to their places of work; the Victorians placed value on citizens traveling to enrich themselves, and to enjoy cultural experiences, galleries, and parks.

The return to “Victorian values” has become a disparaging comment over the past few decades, usually referring to long-discarded conceptions of class, morality, and the hypocrisy with which these were upheld. This year has seen Londoners yearn for our theaters, museums, cinemas, and galleries, while also enjoying the city’s many parks and open green spaces—all of which are also the Victorians’ legacy to our century. I am not sure what form, if any, a reappraisal of the Victorian era will take, now that our complacent faith in the superiority of our own epoch has been shaken so severely.

Similarly, I have been asked by friends overseas about “the British response” to this global pandemic. I am at a loss to describe how the reaction in this country has been unique or particularly different to that of the rest of the world. Or how, at a time when the issues of national identity posed by our vote in favor of leaving the European Union in June 2016 are experienced if anything ever more deeply, that response might be characterized as “uniquely British.”

As London tentatively emerges from lockdown, the debate over what kind of city its inhabitants want to have, and what they are going to get, will emerge from much discussion. I cannot help feeling that this period of isolation, change, and recovery calls out for reflection and contemplation. Many of us now have only tentative answers to the questions that have started forming within us during these challenging times.

The realm of philosophy is uniquely placed to discuss these questions. Of course, speaking from experience, we are not likely to find in philosophical debate everlasting and entirely convincing answers, but my experience also tells me that much of the enjoyment of the debate is the articulation of views the owner might not realize they held, however fleetingly. I would like to hope Londoners who might not have been attracted to philosophy before will consider engaging with the discipline in the search for answers to the questions of 2020.

Philosophers are traditionally portrayed as insular hermits who spend much time in solitary thought and have little need of interaction with our fellow humans. But the best thinkers I have encountered relish exciting listeners through the understanding of complex and historically significant ideas. I personally depend on a live and physically present audience to give a really good lecture, one I take pleasure in giving. I need to tailor jokes appropriately, based on audience reaction, to see if the material is being digested. I look forward very much to the return to my pub philosophy sessions, once pubs are able to play host once again.