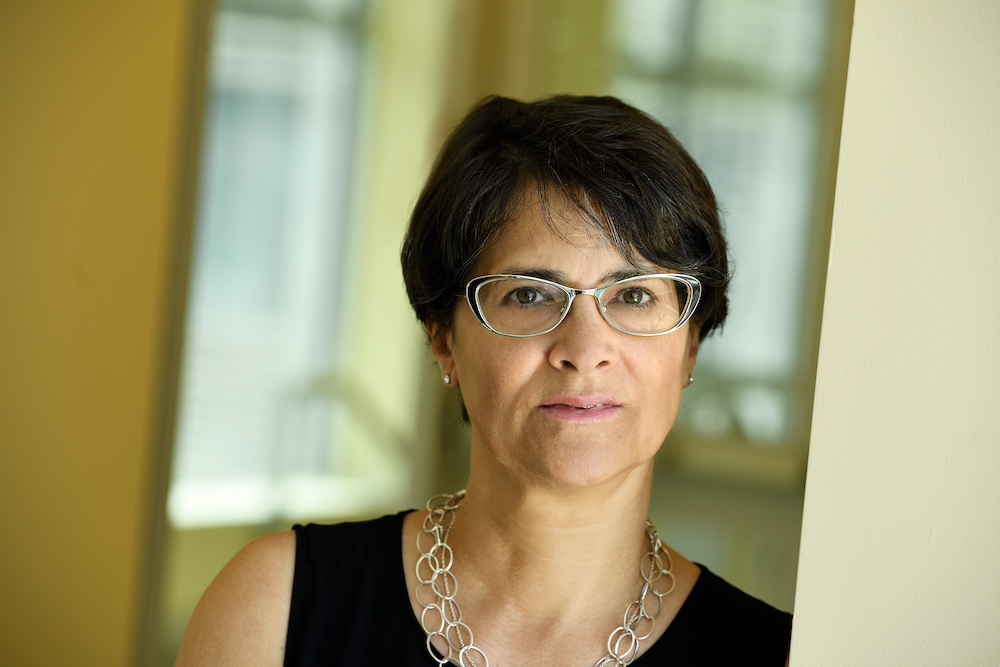 Martha S. Jones is a professor of history at Johns Hopkins University. A legal and cultural historian whose work revolves around how Black Americans have shaped the history of the nation’s democracy, she is the author most recently of Vanguard: How Black Women Broke Barriers, Won the Vote, and Insisted on Equality for All. Before taking part in “Why Don’t Women’s Votes Put More Women in Power?,” the second event in the When Women Vote series presented by Zócalo and the Natural History Museum of Los Angeles County, she called into the virtual green room to talk about Abraham Lincoln’s ghost’s signature, springtime in Paris, and the romance of working late in the American Museum of Natural History.

When I have a lot of room and a lot of time, and oftentimes that comes along with what I'll call working without footnotes. My field is deeply steeped in the necessity of documenting, crediting, attributing, and otherwise footnoting most of what we do. I'm definitely at my most creative when I am free from the footnote.

Is there a woman who has modeled ambition or perseverance in your life?

My mother was a working-class young woman who graduated high school and then hit the world running—and built a career and a professional life in spaces she had no business occupying. And she always did that with integrity and with her own brand of verve and creativity. I’d say in some ways I get my own insistence on occupying spaces that weren't made for me from her.

You’ve called yourself an archive rat. Do you ever find wacky things in the archives you use for your research?

A few years back, I was curating an exhibition, and I was introduced to a folder called “Forgeries and fakes.” It was filled with an interesting number of documents that had been created to mislead, to fool. I still wonder what we learned from what people forge, what they fake, and what that tells us about the premises of the past.

The document I was looking at purported to have the signature of Abraham Lincoln as transmitted to a medium in the 19th century who was connected to Lincoln on the other side, who then created his signature along with the signatures of many other notables who also were deceased. And I just found that fascinating. In a space where we are looking for veracity, for even truth, what does a historian do with something that, by all accounts, is false? Is it something you set aside? Or can that also tell you something about your subject?

You normally spend springtime in Paris. What have you learned from living there part-time?

Well, I'm a New Yorker, born and raised. So I learned first and foremost: New York is not exactly the center of the universe. Which is an important lesson for a New Yorker, if you're lucky.

I think living in Paris has taught me to be far more in touch with what I don't know, what I can't know, and being okay with moving through the world knowing less than most people around me—whether it’s language or culture or history or even politics. And maybe for someone whose day job is being an expert, being a teacher, and whose stock and trade is knowing a lot, it's not so bad to spend part of your life as a real civilian—someone who has more to learn than she has to teach.

Do you have a pet peeve about academia?

I'm someone who spent most of her early years as a student in higher education and public institutions in the city of New York. In my circles these days, it's just that too often when we debate academia, what we really mean is sort of elite academia. And maybe because that's not where I began my life or my training, I am pretty impatient with arguments, analyses, and even hot takes that decline to confess the elite part of the analysis and purport to be speaking about all of academia, all of higher ed, all of intellectual life without really confessing that it's really a read on a very special slice of things.

What is hanging on your refrigerator?

On my refrigerator hangs Sojourner Truth in a little magnet doll, the postcards from my last two books, and the dry cleaning bill, of course.

You just released Vanguard, which a lot of people are calling the history of Black women in America. Was there a cut that you had to make during the editing process that was particularly difficult for you?

This is a good one because Vanguard is built around a series of vignettes, each of which turns on an individual woman. And early on in the writing, I had created a set piece around a woman named Charlotta Bass. She was a Californian, lived in Los Angeles for most of her life, and was the editor and owner of the California Eagle. A fascinating life that included early years during which she was a great proponent of women's votes. In the editing I left her out; I couldn't find a way to fit her very interesting and long life into the book. She could have fit in many chapters and as a consequence, she didn't fit in any one, squarely.

And that might have been fine and I might have forgotten about it except that a few weeks back when Senator Kamala Harris was going to be nominated for Joe Biden's running mate, it was said that she was the first Black woman to be nominated as a vice presidential candidate. And that, of course, is not correct because Charlotta Bass is the first Black woman to have been nominated as the vice president, when she was, in 1952, on the Progressive Party ticket. I was very fortunate that there was a Washington Post reporter who saw me squawking about this on Twitter. He called me late at night to say, “I think I'm going to write something,” and I was able to pull out my notes and have a terrific conversation with him.

And then just last week, the New York Times published an Overlooked No More on her. So Charlotta Bass, in 2020, finally had an obituary in the New York Times. And so it felt somehow that she insisted on a place—and got one—that was by virtue of an important turn of events, just a few weeks ago.

How did you get into trouble as a kid?

How didn’t I get into trouble? Do kids still do this? When I was a kid, I liked to sneak out. I was a kid who, after my parents went to bed, threw myself out my bedroom window, which was on the second floor, and met up with friends and, you know, walked the town, and got into a little bit of trouble.

What is the best (or the worst) meal that you've cooked in quarantine?

Oh my gosh, you want to know the truth? I have yet to cook a meal in quarantine. Because in my household, my husband does all the cooking. And God bless him, as they say, it has been many, many months now. We have not yet eaten out—we have not even yet had takeout.

Do you miss working as a lawyer?

I do, some days. When I was a lawyer, I woke up every day knowing precisely what my purpose was. And I knew the role that I could play in people's lives. I could feel the effect of my work very immediately.

In some ways, being a professor couldn't be more different. My projects are years, sometimes decades long. And when it comes to students, you're lucky when they come back five or 10 years later to tell you that something they studied with you has made a difference in their lives. So those kinds of satisfactions are a little attenuated as a historian.

My best friends are still lawyers and still do the good work. And I like to think that the history I write helps to inform and fuel and further the kind of courageous and meaningful work that they do.

Is there a professor or teacher you've gone back to, to say that their work has influenced you five or 10 years down the road?

Well, you know, now that I'm a professor myself, I appreciate all my professors more than I probably ever did. But that's in part because I can see the evidence of their influence on my own approach to teaching, to learning, and more. Not so many years ago, I wrote, finally, to one of my college professors who had taught biopsychology. I'm not a biopsychologist. Never was, never will be. But he was the person who let me work in his laboratory. The real import of that, and why I wrote to him, was to say that it was in his lab where I learned that I had what it took to be a researcher. I enjoyed the long, lonely, very focused hours spent in the lab. I found that not only satisfying, I found it exciting, and discovered my appetite for research.

Whether or not he remembered me, it mattered very little—because the point really was to say out loud that which we sometimes only think to ourselves, which is how much we appreciate people who gave us time, gave us opportunities to figure out who we might be in the world. His name was Peter Moller. And I'd never forgotten him or the Gnathonemus petersii weakly electric fish we worked on.

He had a lab at the Museum of Natural History in New York, and so part of the experience was you got to be in the museum after hours because your research would sometimes go on late in the night. And so that magical feeling of leaving the lab and walking through at liberty, long before Night at the Museum was a thing, right? It was very special. His next-door neighbor was the cockroach woman. She was one of the great authorities on the cockroach, and at night she had this terrarium that was lit up, and you’d see these enormous cockroaches. It was a very strange place.

It also taught you the romance—like the romance with the archive, the romance in the lab, in the museum. Not all facilities are like that, by any stretch. But when you have that chance to be in someplace that is so special, and you get to feel a little bit like it's your space, especially because you're there after hours and you're on your own. It left a really powerful imprint on me.