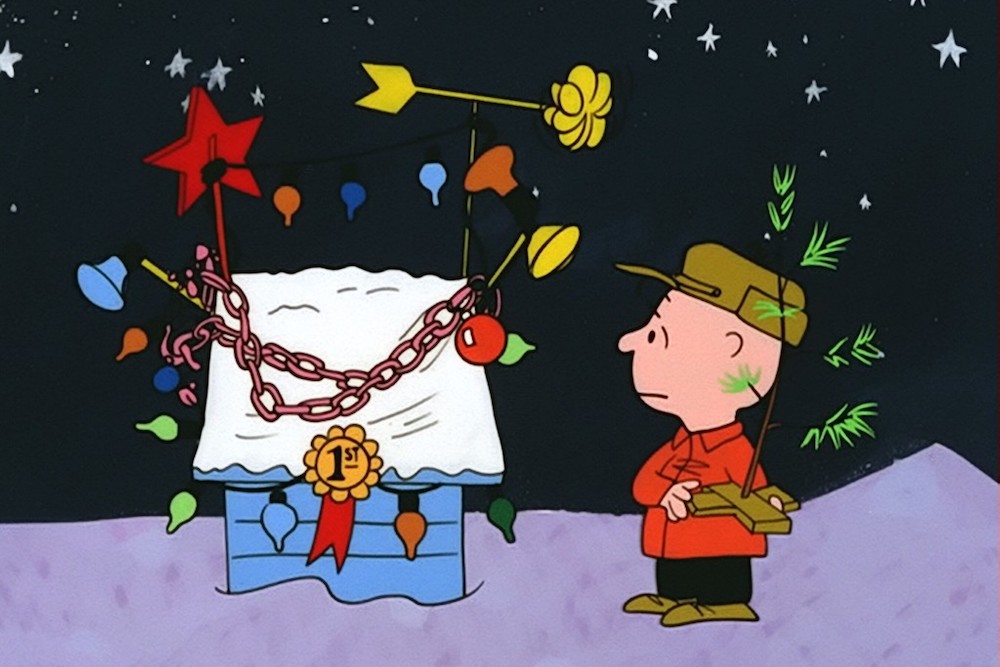 A still from A Charlie Brown Christmas (1965). Courtesy of CBS.

Charlie Brown spends much of his first animated special in contemplation, depression, and frustration over the Christmas holiday. “Find the true meaning of Christmas. Win money, money, money,” he reads from a flyer advertising a neighborhood decorating contest that his dog, Snoopy, is taking part in. Later, when Charlie Brown’s peers jeer at him for ruining their “modern” nativity pageant by bringing the puniest Christmas tree off the lot, the round-headed kid wonders, “Isn’t there anyone who knows what Christmas is all about?”

In response, Linus van Pelt steps up to revive Charlie Brown’s holiday spirit. Calling for a spotlight, he recites the Gospel of Luke 2:8-14, regaling the kids about the birth of Christ, peace on Earth, and goodwill toward men.

Linus’s sermon was no simple Bible recital. Rather, Linus tapped into public guilt over the meaning of Christmas circa 1965. Peanuts creator Charles M. Schulz had long insisted that his comic strip had no artistic or social significance, but A Charlie Brown Christmas, written by Schulz and animated by Bill Mendelez, directly addressed the public’s angst over the yuletide festivities. Peanuts’s holiday venture, a Cold War product, reconciled the seasonal impulse to shop with the spiritual values of goodwill, humility, and family togetherness by placing capitalism and Christianity in the mouths of babes.

Muscular Christianity was a long-lived American strength. Centuries earlier, the Puritans had proclaimed God enshrined their new home as a “city on a hill,” and the various spiritual “Awakenings” throughout history brought comfort to Americans during times of social change. By the 1950s, Americans readily weaponized Christianity against the “godless Commies.” Cold Warrior crusaders placed “under God” in the Pledge of Allegiance. “In God We Trust” became the country’s official motto, ousting the more inclusive “E Pluribus Unum” that had been around since 1776; the Treasury started stamping the phrase on all paper currency in 1957. So when Linus brought God into prime time by referring to the birth of Christ, the cartoon child was merely following the lead of real-life adults.

He was also appealing to, in the words of one contemporary critic, “the jaded appetites of television viewers”—who were burned out on consumerism. The 1950s was a prosperous time for white middle-class suburbanites who rapidly lapped up luxuries that weren’t on offer during the Great Depression and World War II. But not everyone rejoiced; critics complained about how materialism sapped individualism into cardboard cut-outs from the same factory mold. Books such as The Man in the Gray Flannel Suit, The Lonely Crowd, and Growing Up Absurd described Americans flailing in a spiritual dearth of meaningless designer colors. The beatniks, delinquents, and an emerging subculture of disenchanted youth would blossom into flower children by the late 1960s.

Peanuts rode to its height in this contradiction of capitalistic Christianity. The perpetual loser Charlie Brown tapped into the national zeitgeist of Americans who could never keep up with the Joneses. While A Charlie Brown Christmas only depicted a certain demographic of the white middle class—the proto-feminist Peppermint Patty and minority characters like Franklin were in the future—Peanuts was subversively poking at the status quo by airing defeat, disappointment, and despair on a regular basis.

A Charlie Brown Christmas, written by Schulz and animated by Bill Mendelez, directly addressed the public’s angst over the yuletide festivities.

The intersection of children, Christianity, and consumerism made 1965 ripe for Peanuts to enter animation. Schulz’s gang of lovable losers made the cover of TIME magazine in April that year, and he felt the timing was right. Schulz insisted on using the Scriptures to “add some meaning to it,” rebutting the usual holiday specials that centered on Winter Wonderlands of toys. For instance, Rudolph the Red-Nosed Reindeer—where the bullied protagonist finds love as a deliverer for Santa’s goodies—premiered the year before for NBC.

Of course, CBS, in broadcasting a Peanuts special, hoped to reap advertising dollars. For Schulz, though, Peanuts’s world-weary kids wielded a deeper meaning of Christmas. While Schulz himself held no special affinity for drawing children other than that they “sold” comic strips, he recognized that youngsters had a redemptive power based on their innocence. Schulz insisted on casting children rather than adult actors to handle voiceovers, heightening their authenticity as they coped with social forces in a world where no adults are seen or heard. “Christmas is primarily a children’s day, for it takes the innocent faith of a child to appreciate it,” he wrote.

Such purity was personified by Linus van Pelt, who every Halloween faithfully waited in vain for the Great Pumpkin. In 1967, Schulz described Linus as “very bright, but very innocent. He has a way of saying pompous things and then being brought down quickly.” Linus’s downfall usually came at the fist of his bossy sister, Lucy, but his grandiosity made for a spiritual climax as he quotes scripture. Indeed, Linus’s sermon would be reprinted in a Sunday strip a year later and again in December 1985, and, in 1967, Robert Short’s The Gospel According to Peanuts became a bestseller. As for A Charlie Brown Christmas, it won an Emmy and a Peabody Award, and has returned every holiday since.

For Cold War America, Schulz’s sincere message about Jesus’s origins story neatly legitimated the season’s consumer tidings. Schulz had no qualms about the commercialization of his craft, as he remained consistent that the comic strip itself was a commercial product that helped sell newspapers rather than an “art.” Schulz defended his licensing t-shirts, greeting cards, and assorted memorabilia, noting that no one forced the public to buy a Snoopy plush toy. In later comic strips, Schulz would criticize the commercialization of childhood, from Little League to snowmen-building contests. But at the same time, he saw nothing contradictory in selling comic strip collections to a hungry public.

Neither do Linus and friends. After Charlie Brown’s sapling sags under the weight of a single ornament, the gang flocks to the rescue. With Linus’s lead, they ramshackle Snoopy’s award-winning décor to glam up Charlie Brown’s tree. All dolled up, this evergreen goes “commercial,” standing straight and pristine, commoditized like the “modern” Christmas aluminum trees that Charlie Brown had rejected earlier in the special. But Charlie’s rejuvenated tree is “real”—not just because it was actually timber, but because the children construct it, they’re sincere about it, and they do so under a veneer of holy sentiment as they sing “Hark the Herald Angels Sing” afterward.

This purified mixture of Cold War crusaders, kids, and consumers made A Charlie Brown Christmas an American institution in itself. In addition to the annual airings, the animated special spawned a wealth of merchandise, including composer Vince Guaraldi’s jazzy soundtrack albums, book adaptations, ornaments, and cards. Even the sagging tree itself has ended up on retail shelves in its pathetic glory as a collectible. Ironically, some of these limited-edition gifts sell for big bucks, are breakable, and are definitely not to be handled by children.

A Charlie Brown Christmas may be timeless in its appeal to long-held American values. But lightning didn’t strike twice. When Schulz and Melendez produced a sequel in 1992, appropriately titled It’s Christmastime Again, Charlie Brown, the context and the message had changed. With the Cold War won and Americans entering a consumer boom that saw church attendance slide, Peanuts’s Christmas now centered on what Sally Brown called “getting all you can get while the getting is good.” For his part, Sally’s round-headed brother agonized over selling his comic book collection to buy gloves for the Little Red-Haired Girl.

Noticeably absent was the Lord—Sally Brown, who had sung “Hark the Herald Angels Sing” 27 years earlier, now confused the lyrics with “Harold Angel.” Fittingly, audiences decided it wasn’t Christmastime after all, and this sequel faded into Peanuts obscurity in favor of the original (as did the post-Schulz Charlie Brown’s Christmas Tales [2002] and I Want a Dog for Christmas, Charlie Brown [2003]).

After so many years, A Charlie Brown Christmas has become an adjective, an expression of a situation in which the everyman failure can shine. The special nostalgically reaffirms a middle-class Americanism through religion-fused materialism, and a little child shall lead them.

And that’s the meaning of Christmas, Charlie Brown.