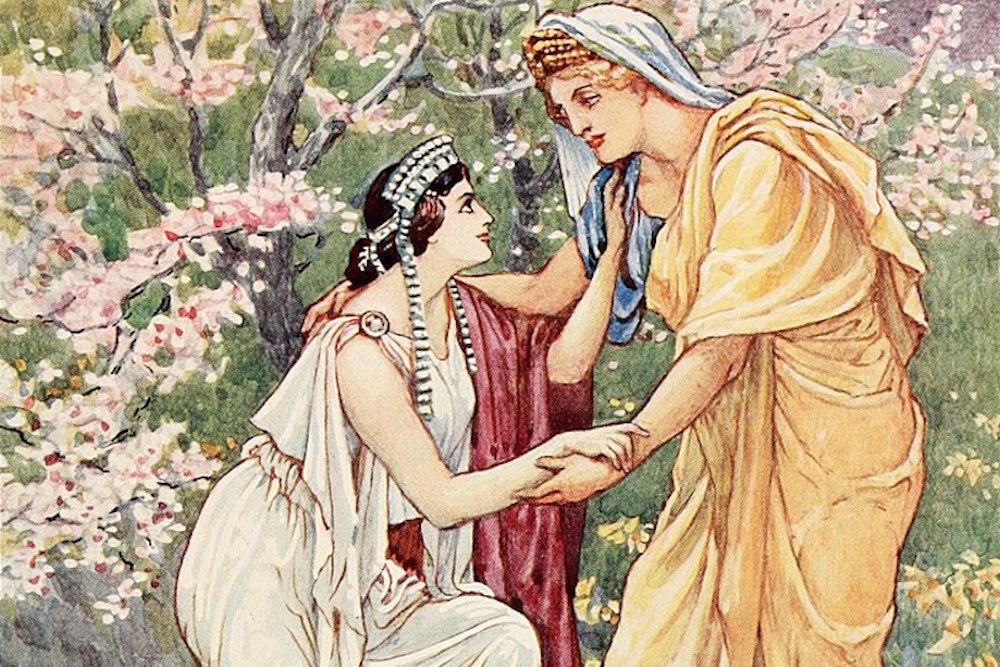 “Demeter rejoiced, for her daughter was by her side” by Walter Crane. From The story of Greece: told to boys and girls (1914) by Mary Macgregor. Courtesy of Public Domain.

When I was young, my mother used to tell me the ancient Greek myth of Demeter and Persephone at bedtime. Now that I am a mother myself, the story has come to haunt me in more ways than one—informing my own experience of motherhood as the continuous interplay between separation and reunification, breaking apart to come together again, and all the grief and joy in between.

As a popular retelling of the myth goes, Persephone is picking flowers with her friends near a lake when suddenly the earth splits open and Hades, in his golden chariot, emerges and snatches her away, ferrying her down to the underworld, where she becomes his unwilling queen. Sensing something amiss, Persephone’s mother, Demeter, calls her daughter’s name, but to no avail. She only finds scattered petals floating on the lake’s surface. Raging across the Earth in her search of her daughter, the goddess brings the first winter to mankind as punishment for Persephone’s disappearance. Zeus, ultimately realizing that the world will perish if Demeter doesn’t get her daughter back, eventually returns Persephone to her mother. But because Persephone mistakenly ate four pomegranate seeds while she was in the underworld, she must return to Hades for a third of every year, forever.

The story of Persephone is used to explain the cycle of the seasons. Fall and winter each year is understood to be the time when Persephone descends into the underworld, and the emergence of spring and summer signals her return to her mother and the world of the living. But the story is also about motherhood and the necessary pain of letting a child go so that she can fully become herself. You could argue this process begins the second a child is born, as being born is the first real separation from the mother, the first rupture that informs the many ruptures and subsequent repairs in the mother-child relationship.

A wise friend reminded me of this soon after I gave birth to my daughter, Lucia. We need to prepare ourselves to let them go, she said, so they can leave and forge their own paths. This, my friend argued, is the true work of motherhood. Our children are only guests in our houses. “It’s like holding a baby bird,” she told me. “Too tight and you crush her. Not close enough and she flies away too soon, unprotected. Hold her with the knowledge of future flight.”

I thought about her words as I soaked up listless afternoons singing to my baby, pacing the bedroom and rocking her in my arms while I stared out at the palm trees and the flat blue line of ocean, the amniotic feeling of oneness coursing between us, as if we were still intertwined by blood and fluid, multiplying cells and placental tissue. It seemed impossible that Lucia would grow up and separate from me, leading a life that didn’t necessarily include me, the Persephone to my Demeter. But who knew, she might even shun everything that I had taught her.

Having Lucia made me more aware of how the myth of Demeter and Persephone had informed my relationship with my own mother. My parents divorced when I was 7, and afterward, I ping-ponged back and forth between their houses. On Sunday nights, I would pack up my duffle to be reunited with my mother after a week apart, or to leave her again. The persistent cycle of rupture and reunification put me on familiar terms with the pain of maternal separation. I was always highly aware of my own distress over my living arrangements. Now a mother myself, I could more fully imagine my own mother’s heartache as she became Demeter, the grieving mother, who had to let her daughter go every week, forever.

But my mother’s devotion to herself, and to her own professional and spiritual path, also primed me to not abandon my own years of study and work. When Lucia was born, I was in the middle of my graduate studies, with coursework, a looming dissertation, and an unfinished novel hanging in the balance. My mother had always told me to finish my Ph.D., no matter what. But six weeks after giving birth, I didn’t know if I would ever write again; I remember telling my academic advisor that I feared motherhood had swallowed me whole. You will write again, she told me calmly, just give it time.

As I stood on the empty school lawn, I realized that we’ve always been doing this, like Demeter and Persephone, and we will continue to do this: letting each other go so we can come back together again.

It took about four more months for me to come around, and realize that I wanted—and needed—to return to my studies. I found a babysitter to watch my daughter. The woman smelled of starch and talked too much, and Lucia wailed the minute she picked her up, but eventually calmed. I got into my car that first morning with still-wet hair, determined to drive to work, determined to leave behind those yawning days of closeness, with all of their intensity and boredom, just for a handful of hours. I repeated under my breath: The baby is a guest in my house; she’s a guest in my house.

I gripped the steering wheel, for a time unable to actually drive away, unable to move, so overcome with guilt and longing for my daughter, overcome by the separation that was occurring then, and by all the future separations we would endure to fully become ourselves. But I did it. I drove away—that day, and the day after, and the day after that, until the pain dulled and became routine, until it became part of me. The sight of my daughter happy, clean, and well-fed greeted me upon my return at the end of each day, and I held her again, inhaled her milky soapy scent, my heart contracting, knowing no greater relief than this.

I poured all the pain, guilt and fear tangled up in our daily partings into a novel—the tale of a mother separated from her daughter by war, who rages, grieves, and searches for her daughter amid the ruins of postwar France. I heard my mother’s voice, telling me to keep writing, to keep going, that separating from the all-encompassing demands of domesticity was imperative to creating art.

Lucia is 10 now, and I also have a son who is eight. My book is completed and published. But I will never forget the pain of that initial separation, and all the subsequent ones that followed. Our family has been pushed together again these last 14 months, trapped in the enforced closeness of COVID-19, with its lack of normal boundaries and separations. This time together has been a joyful gift, but it’s also been a strange suffocation. It has been infantilizing for my children to be tucked so tightly under my wing again, as I anxiously monitor their every move, from school Zoom meetings to walks around the block. It is time, again, to step away.

Recently, just after her 10th birthday, Lucia put her arms around me and announced that she was really going to miss me. She said this with a knowing sadness, as though her leaving was inevitable and imminent. “When I’m a teenager, which is just a few years away, I’m moving into my own apartment,” she said, a glimmer of mischief and delight in her eye. We joked about it, and I held her tight. I envisioned her tearing down the Pacific Coast Highway on a Harley, desperate to cross the border into adulthood while I raced after her on my own motorcycle, determined to stay in her rearview mirror, wherever she went.

Sometimes I fantasize that I will keep Lucia close, like the mother in the children’s book Runaway Bunny, who vows to follow her baby bunny no matter how far afield the baby bunny tries to go. But I also hope that I will release her into the world with the same confidence and trust my own mother offered to me. Of course Lucia is dreaming of escape. We all are. This past year was stolen from her, and from all our children. Her world became as small as a pomegranate seed; its seasons, disrupted. The winter when Persephone separates from her mother, descending into the underworld where she discovers her own autonomy, evaporated into a seemingly eternal quarantine summer of togetherness without reprieve.

After 13 months sequestered at home, my children finally returned to in-person school last week. Because the virus is still a threat and classrooms can’t be full, it’s a hybrid setup. We separate for three hours each morning and then come back together again.

It felt strange that first morning to drop them off and watch them disappear into their classrooms, echoing that morning long ago when I first left Lucia in the care of someone else, crying in my car, white-knuckling the steering wheel. But as I stood on the empty school lawn, I realized that we’ve always been doing this, like Demeter and Persephone, and we will continue to do this: letting each other go so we can come back together again.