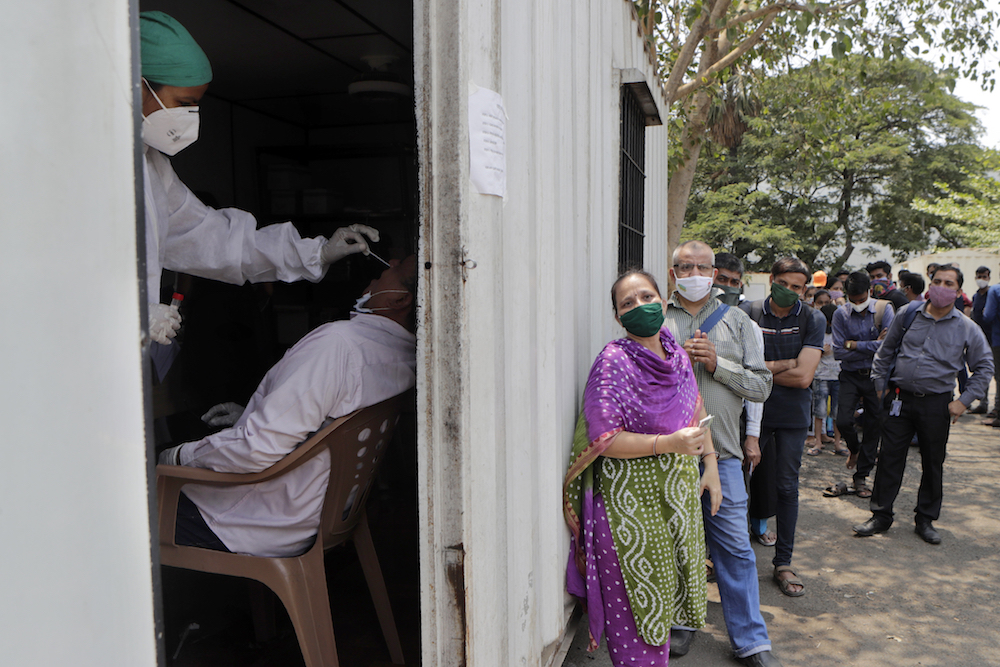 People wait in line outside a field hospital in Mumbai, India, to receive a COVID test on May 6, 2021. Courtesy of Rajanish kakade/Associated Press.

Every morning, I wake up in my home in a middle-class locality in Bangalore, the Silicon Valley of India, and heave a sigh of relief. I do not have temperature; my oximeter readings are normal.

For the last 14 days, my city and state have been under lockdown. My computer has become my window to the world. Every hour or so, I use it to write condolence messages for friends who have lost family members. My wife, a frontline worker, will step out a bit because she works with waste pickers and runs children’s libraries in informal settlements. When she is home, she is on calls, coordinating relief efforts because the virus has started reaching poor neighborhoods.

The official number of cases and deaths in India has surpassed all other countries; as I write this, India has recorded over 22 million cases and over 245,000 deaths. But each day, those numbers increase. Daily Coronavirus cases have been exceeding 400,000, with more than 3,500 deaths. Currently, our country makes up nearly half of the world’s new COVID-19 cases and a quarter of its deaths.

But those numbers don’t even reflect the full picture; reports from hospitals and cremation grounds vastly contradict the projected figures of cases and deaths. One of the reasons is that given the acute shortage of beds in hospitals, many patients never reach them, and their deaths are not registered or counted. There is also massive under-reporting with the government deliberately fudging numbers.

This is a blind fall from where the country was this winter, when it was averaging about 12,000 cases and 100 deaths a day. On January 28, Prime Minister Narendra Modi patted himself on the back at the World Economic Forum, held virtually in Davos, Switzerland, announcing India had ducked the dire predictions on the pandemic. On February 21, the ruling Bhartiya Janata Party (BJP) passed a resolution “unequivocally hailing its leadership for introducing India to the world as a proud and victorious nation in the fight against COVID-19.” These premature assertions sent the wrong message: abandon caution.

While all experts agree that pandemics have second, even third waves, the Indian leadership chose to ignore science. This, despite the fact that the Standing Committee of the Parliament on “Outbreak of Pandemic COVID-19 and its Management,” clearly said it was an “unpredictable pandemic with [a] possibility of [a] second wave” and had dwelled upon the lacunae in the country’s health infrastructure in a report issued to the Upper and Lower House this February. Similarly, a high-level laboratory consortium—whose daily reports go to the health ministry—has been warning the government about the second wave since early March. Both were ignored.

While no country’s healthcare system was ready for COVID-19, India’s was especially vulnerable.

Instead, taking its so-called victory over COVID-19, the government announced elections in five states. In one of these states, Bengal, which the BJP desperately wanted to win, the government pushed the Election Commission to conduct elections over eight phases to showcase BJP’s ability to draw huge crowds to its rallies. (To put this in perspective, the last two country-wide general elections included a maximum of seven phases.) Marshaling all resources to the elections, the government ignored early signs of the second wave.

Meanwhile, eyeing the upcoming state elections next year in neighboring Uttar Pradesh—the biggest state in India—as a populist measure, the government permitted the Kumbh Mela—a Hindu festival held every 12 years in which millions of devotees participate and ritually bathe in the Ganges river at Haridwar in Uttarakhand. The last Kumbh Mela was conducted in 2010. Technically, this one should be in 2022, but it was advanced by a year for astrological reasons. RT-PCR tests, mandatory masks, and physical distancing were not enforced, leaving the 3.5 million people from all over the country who made the pilgrimage vulnerable to what would become a super-spreader event. The day after the final ritual bath of the Kunbh Mela was observed, the local government clamped a curfew on the city, but the damage was already done. Devotees took the virus with them across the length and breadth of the country.

The country’s inadequate health infrastructure has predictably become overwhelmed in the aftermath. A few days ago, seven people died here, in a Bangalore hospital, due to the shortage of medical oxygen. Deaths because of oxygen shortages have taken place in other cities, too; in some, patients have also died in hospital fires. The country’s cremation grounds are becoming a major issue, as well. Overcrowded and understocked with firewood, crematoriums are unable to process new corpses. Because of this, my state government has begun allowing private cremations in farm lands.

While no country’s healthcare system was ready for COVID-19, India’s was especially vulnerable. Neo-liberal policies that the government adopted in the early 1990s allowed haphazard private investment with hardly any regulations. Compounding the issue, the country’s public health spending has been incredibly low. Because of the pandemic, in 2020-’21, India spent 1.8 percent of its GDP on health, which raised funds just slightly above previous years, where health made up anywhere from 1-1.5 percent of the budget.

Making matters worse, last year’s COVID-19 facilities had also already been dismantled in many states by the time the second wave hit. Old bills to vendors have still not been settled. And while the government did invite bids for pressure swing adsorption oxygen generation plants last fall (with a total of 262 plants sanctioned under the PM-Cares fund), to date, less than 33 of those plants have been installed. Meanwhile, while many countries have recently donated liquid oxygen, canisters, and concentrators, the supplies ended up stuck at the Delhi airport for more than 10 days because no policy had been established on how to distribute the supplies to states in proportion to the devastation the virus has caused.

While India is the world’s largest manufacturer of medicines and vaccines, we are also currently dealing with a huge shortfall of vaccines in the country. That’s because, in August of last year, when many countries placed huge orders with the Serum Institute of India, the country’s largest vaccine-producing company, India placed a woefully small number of orders and is now scrambling for vaccines. Currently, about 12 percent of India’s population has been vaccinated with one dose. The population that is fully vaccinated is far smaller.

People who are 45 and older are able to receive a free vaccine at government centers, but the central government has left it to the state governments to decide whether they want to make the vaccine free for those who fall under the minimum age requirement or make them purchase it on the private market. This move has been criticized by health experts because India is a poor country, and it is impossible for majority population to pay for vaccines especially when many daily wagers have lost their jobs.

As we wait on a national plan to deal with the unfolding public health emergency, the government does not even have the integrity to acknowledge the tragedy that’s occurring. There’s the country’s home minister who says there’s no shortage of oxygen or beds, the minister of commerce and industry who tells patients to conserve oxygen, and the health minister who promotes mumbo-jumbo cures by gurus. As this goes on, the government has tried to shut down Twitter handles and news reports of what is happening, file police cases on people seeking help, and target relief agencies.

Throughout the crisis, it is these citizen groups and organizations who have stepped up their efforts to save lives. In city after city, they are the ones setting up oxygen centers, food services, and even hospital facilities. But there are issues; many lists are duplicated, phone numbers do not work, and patients and care givers are harassed. The least the government could do is coordinate with relief agencies to create a central system—whether it’s city-wise, district-wise, or state-wise—that could be updated regularly and give citizens a sense of an administration doing its job. Especially because, unlike last year, the virus has now spread to tier-2 and -3 cities and villages, which are accounting for half the deaths in the country. But that would contradict the government’s stated position.

Instead, in a mark of arrogance and apathy, the government moves forward with the construction of the $2.8 billion Central Vista Project (which includes a new Parliament and PM’s residence), recently declaring it an essential service in COVID-devastated Delhi, with construction to conclude in 2024 when the country goes to elections again.

Locked in my home, I watch the world around me collapsing. While my city announces another lockdown for the next 14 days because the previous one did not break our cycle of transmission, I read a newspaper report about how top government officials spent their time attending a workshop on perception management and how to project positive stories.

Every night, I check the day’s numbers hoping that something has changed. Before I look, I always send up a prayer that they have decreased. But when I check this evening, once again I see that they have not. The graph of cases and deaths continues to rise.