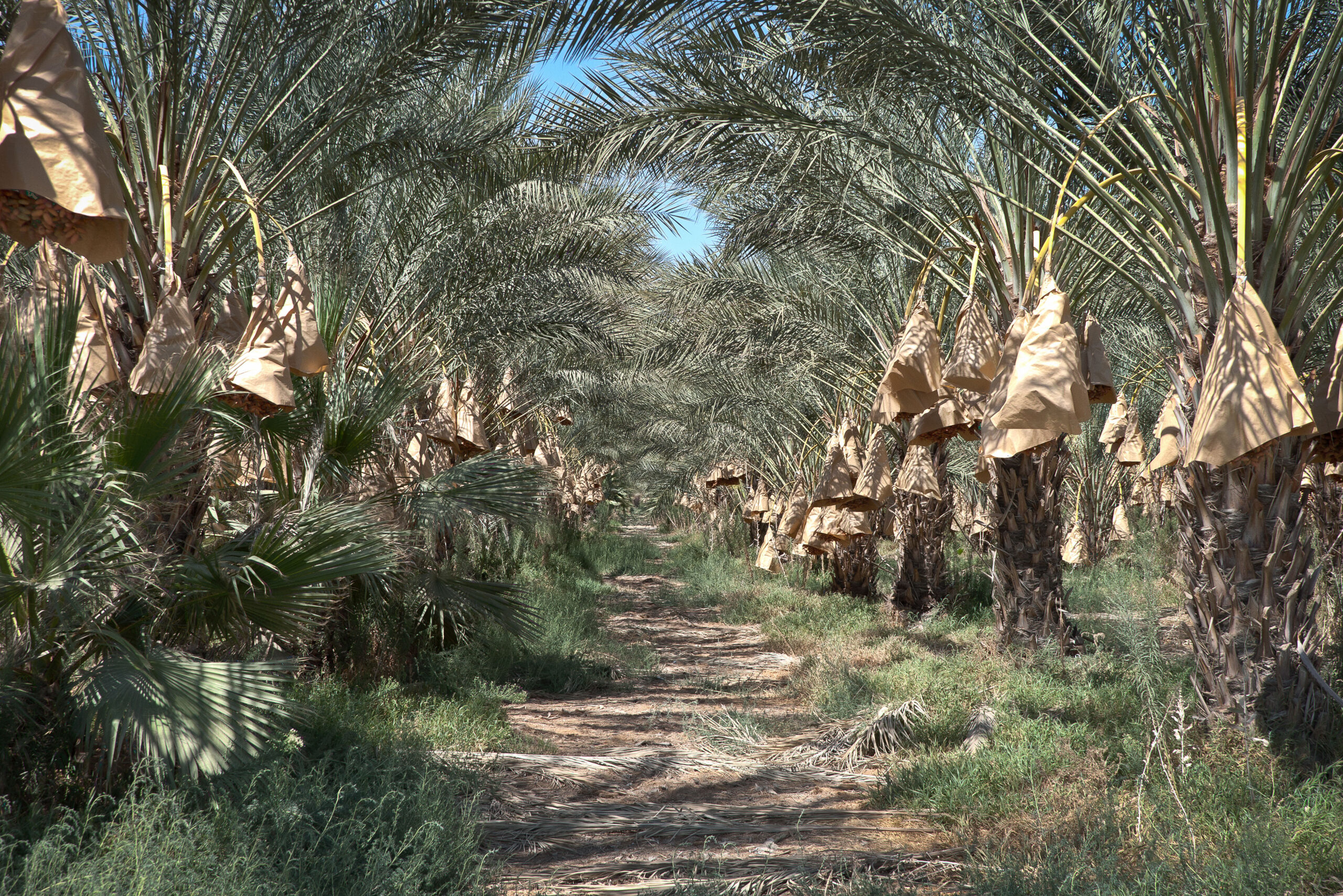 Even as she was going blind, my mom, ever the poet, delighted in sitting out among the palms and birds, and enjoying and visualizing the scene, as I irrigated my date gardens in the Coachella Valley of California.

The palm said, “My clover is cool around my bole, over my hidden roots.
My fronds clatter, crash
like waves in the far off sea.”

I follow the tradition of thousands of years, of date palm growers diverting the waters of the Nile, the Tigris and Euphrates and Indus, to irrigate their gardens. Water that entered the Colorado River basin as melted snow in Wyoming and Utah, Colorado and Arizona, and even New Mexico, contributes to the flow onto my property.

But this is a historic moment, too. This summer, for the first time ever, water on the Colorado River was rationed. With the West drier and the current drought dire, the river’s flow, which supplies water across the American West, as well as to Mexico, cannot meet the needs of all the humans who depend upon it.

When date growers want to order water for their palms, we can call or email the Coachella Valley Water District (CVWD) and order water—“30 inches on Monday, off Wednesday,” and their computer alerts the computer at the Imperial Dam on the river, which regulates how much of the total flow is routed over to our canal and Valley. As we are below sea level in the Salton Sink, the need for pumping is minimal.

When date growers want to order water for their palms, we can call or email the Coachella Valley Water District (CVWD) and order water—“30 inches on Monday, off Wednesday,” and their computer alerts the computer at the Imperial Dam on the river, which regulates how much of the total flow is routed over to our canal and Valley.

My usual 30 inches are not much compared to neighbors who order 90 inches or 120 inches, so the “Zanjero” (the CVWD employee who opens the water valve gate up on Ave. 60 that regulates our stem of the canal) may not adjust the flow exactly to 30 inches, and I may get a little more or less.

The insects cry in different voices, “When the water comes
we climb the clover to the pinnacles of safety.”

The ducks speak in an ensemble
of piccolo, oboe and kazoo, “Now
there is water around the tree for our feet, a banquet of bugs on the clover;
our beaks snap and gather the harvest, crisp and squishy, legs and wings,
tidbits of flyer and crawler,
the last buzz in our bills,
the last tickle in our swallowing.

But if I get a little less and come up short of water, the final end palms in my rows may not get water that month. As the crisis deepens, who decides which “end rows” get short changed, and how that shrinking total flow is allocated?

Congress passed the Newlands Reclamation Act of 1902 to fund irrigation projects throughout the West. The original intent was for U.S. taxpayers to provide the infrastructure (dams and canals) to help family farms, with the subsidized water going to farms of 160 acres or less.

In 1922, the Federal Government and the affected Western States negotiated a compact that divided the allocation of the Colorado River’s waters. Seniority of water rights goes back to that agreement. Since then, this law of the river has spawned an army of lawyers and lobbyists defending different interests, and treaties that involve Mexico, Native Nations, states, and various other entities.

The Coachella Valley Water District and the Imperial Irrigation District (IID), at the southern end of the Salton Sea, cover a 100 mile plus area stretching from Palm Springs to the Mexican border. Both were formed over 100 years ago. But over the years, large landowners and corporate farms joined with IID to challenge the 160-acre limitation, going back to the Boulder Canyon Act of 1928, arguing the notion of “perfected rights.” In 1980, in Bryant v. Yellen, the U.S. Supreme Court waived any limitations on water deliveries to these growers.

The allocation of the river’s limited and life-giving bounty has become a political as well as ecological crisis as urban and rural interests clash.

During my several days of irrigating every month, tens of thousands of cars will be washed and tens of millions of toilets will be flushed in Southern California with water from the river.

I pay under $50 an acre foot (325,851 gallons) for my water. San Diego has agreed to pay IID $679 per acre foot. An acre foot is estimated to serve 2.5 households (four persons each) for a year. Since they have more votes than the sparsely populated Imperial Valley, and more representatives in Sacramento and Washington, and their own lobbyists and lawyers, and are willing to pay, urban users in San Diego and Orange and Los Angeles are going to put tremendous pressure on agriculture to cut back.

There are delights for all on a desert morning
when the water is sidetracked from the Colorado.
Even the insects know
they have hidden their eggs well, and their tribes will increase,
though they perish in the duck’s morning meal.

A key principle in water allocation is “best use” or “beneficial use” which assumes “best use for humans.” The ducks and bugs and clover cover crops, the whole web of life that the river stimulates in the date gardens in this valley, are not part of the equation. If the IID can provide water at $50 an acre foot, and San Diego is willing to pay many times that, corporate farmers and the IID are eying selling more and more of their high seniority “rights” to the water. The Imperial Valley reverts to desert.

But wait—water itself isn’t what we pay for. The original intent of taxpayer-funded dams and canals was to provide water to farmers to feed the cities. Farmers and urban dwellers are paying for the water delivery systems, and the maintenance of same.

CVWD delivers my water through canals by gravity flow, with no water treatment and almost no expense of pumping. Urban dwellers are paying for the pipes and pumps and filter systems that enable them to flush their toilettes with purified water suitable for drinking. As the decreasing supply of the river’s waters are reallocated, and the original intent of the 1902 Reclamation Act is overridden, urban and rural populations must both promote conservation and Best Use/Beneficial Use of this life-giving asset.

The Coachella Valley, with its high seniority water rights and highly productive and beneficial use in agriculture, may have more protection for its water that other agricultural areas. But the river cannot do all that humans demand. And agriculture, and the whole web of life it supports, will surely suffer.