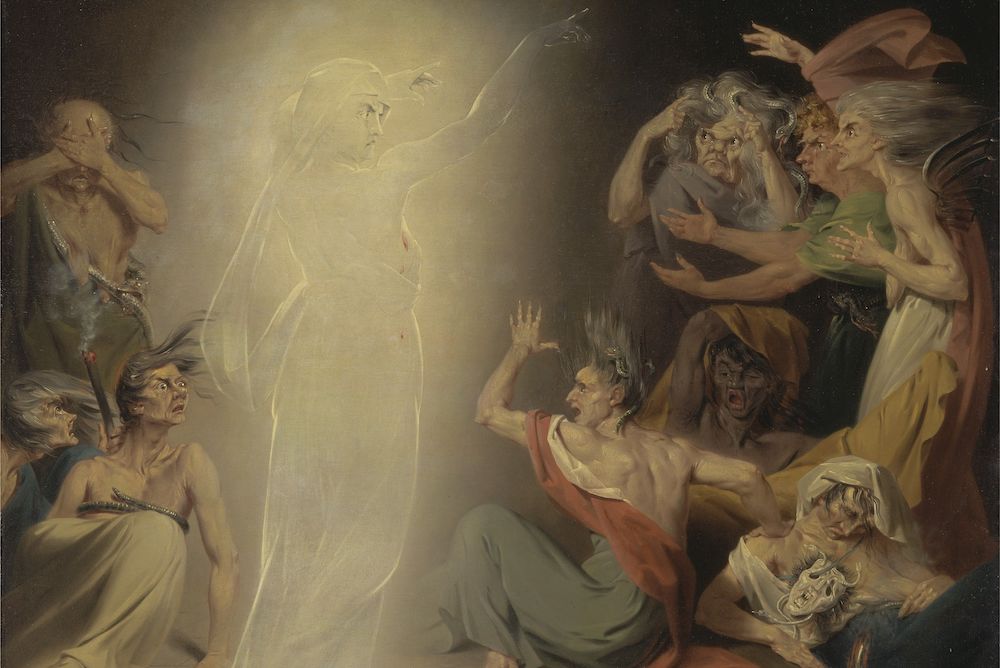 “The Ghost of Clytemnestra Awakening the Furies” (1781) by John Downman. Courtesy of Yale Center for British Art, Paul Mellon Collection

The pandemic struck at a time when people’s confidence in their government was already shaky. Many decried the lack of attention being paid to information about public health and safety, while others distrusted what was being said by public health and safety officials. Some looked to religion for answers, while secular observers cited factors such as overcrowding in urban areas and lack of proper precautions, like basic sanitary measures, to explain the disease’s spread. Amid the lack of faith in authorities and institutions, there was concern that democracy itself hung in the balance. Then, just when it looked like the outbreak might finally be brought under control, another wave flared up. Then another.

But this isn’t a story about America in the 21st century. It’s a story about ancient Greece in 430 B.C.E. That year, a mysterious disease (likely typhus or typhoid fever) hit the crowded city-state of Athens. Already burdened by being at war with Sparta, the Athenians sought guidance from a long-standing source of wisdom: ghosts.

The belief in ghosts was so well refined among the ancient Greeks that there were three different categories of the spectral beings: the deceased who were not buried with the proper rituals, those who suffered premature or untimely deaths, and victims of violence, including casualties of war. If someone died under those circumstances, it was felt that the soul was caught between two worlds, and could not move on to the Greek concept of the afterlife. Sometimes, this lack of final fulfillment was so great that a ghostly spirit could appear among the living, occasionally set on revenge.

The Greeks also believed that the ghosts of the dead had special knowledge to share with the living, coming to their rescue to provide advice on what to do in difficult situations. A mysterious pandemic was just the kind of dilemma in which the ancient Greeks would seek out some spectral advice—and one of the easiest haunts to find ghosts in ancient Greece was, arguably, the stage.

Like the ancient Greeks during their time of plague, people today living through the time of COVID may find their own solace in seeking out ghostly counsel.

Ancient Greeks enthusiastically supported their theater, and in fact, historians believe that the outdoor theater of Dionysus in Athens remained open during the pandemic, even drawing large crowds. And stage-ghosts, or eidolon, common in ancient Greek dramas, were a device to offer words of wisdom to audiences from beyond the grave.

The classical Greek dramatist Aeschylus is one of the best known for utilizing ghosts in his plays. Knowing that the wisdom of ghosts would carry far more weight than the word of flesh-and-blood human characters, Aeschylus used them for important storylines in some of his most notable works. In his drama The Libation Bearers, for instance, the lead characters, Orestes and his sister Electra, summon the ghost of their late father, Agamemnon, in hopes that his spirit will provide guidance for how to punish his murderer—Agamemnon’s wife and their mother, Clytemnestra. The spirits of the dead were believed to hover near their final resting place and could be called upon to work either for good or for evil. Electra pays a visit to Agamemnon’s tomb, where she pours libations (an important part of the proper Greek burial ritual, usually consisting of wine, water, honey or oils) on his gravesite in hopes of conjuring his ghost. She is successful, and Agamemnon’s ghostly counsel helps Orestes succeed in murdering Clytemnestra.

Aeschylus continued this genre of ghost tales with The Eumenides, which opens after Clytemnestra’s death. Now it is her ghost that is seeking vengeance. But just when it seems she will initiate another round of revenge killings, a group of spirits called the Furies come to the rescue and put an end to the cycle of violence. The Furies were originally considered to be the vengeance-fixated ghosts of murder victims, but Aeschylus has them act as a force for justice here, reflecting the fact that as Greek society evolved, the Furies also become known as the titular Eumenides, or the “Kindly Ones.” This softened stance toward the spirits no doubt would have soothed anxious Athenians watching in plague times, who may have thought what was happening around them was a curse from their pantheon of gods. While the Greeks worshipped their gods, they knew they might mete out punishment to humans on a whim or as part of an inter-deity competition. The benevolence of the kinder, gentler Furies might reassure Athenians that the plague was not necessarily a penalty for warring with Sparta, for instance.

It was not just Greek tragedies in which ghosts made their presence known on stage. Ancient Greek comedy also featured their own ghostly guest spots. There are references by writers from the Classical period, for example, to the comic Greek playwright Eupolis, who lived in Athens during the time of the 430 B.C.E. plague. In his play Demes, Eupolis suggested how life in Athens might ultimately get back to a “new normal” again through ghosts of the great Athenian statesmen Aristides, Pericles, and Solon. Unfortunately, their exact dialogue has been lost to us, but Athenian audiences were likely able to gain historical perspective from the satiric spirits who offered comedic advice to the embattled city-state (experts traditionally believe Demes was written around 412 B.C.E. after another Athenian disaster, in this case the military expedition to Sicily). Their presence, after all, was a reminder that life in ancient Greece had never been without tribulation. Yet society continued on.

Like the ancient Greeks during their time of plague, people today living through the time of COVID may find their own solace in seeking out ghostly counsel. It is no coincidence that the advent of spiritualism in the United States rose greatly in popularity after such deadly cataclysms as the Civil War and World War I. People wanted to hear from their lost loved ones, to know that they were happy in the afterlife, and seek insight into a bewildering present and an unknown future.

While popular culture today has expanded to include ghostly offerings on everything from television to TikTok, maybe the Athenians were onto something when it came to stage-ghosts. Archaeological evidence suggests ancient Greeks saw a connection between theater and healing. So, as was the case in smaller towns around the Greek countryside, a temple to Asklepios, the god of healing, was built adjacent to the theatre of Dionysus in Athens. And so, when plague patients would have been brought to the temple, it may have been felt that listening to a play nearby aided in their recovery—and, perhaps, with the help of some eidolon even offered them a bit of solace.