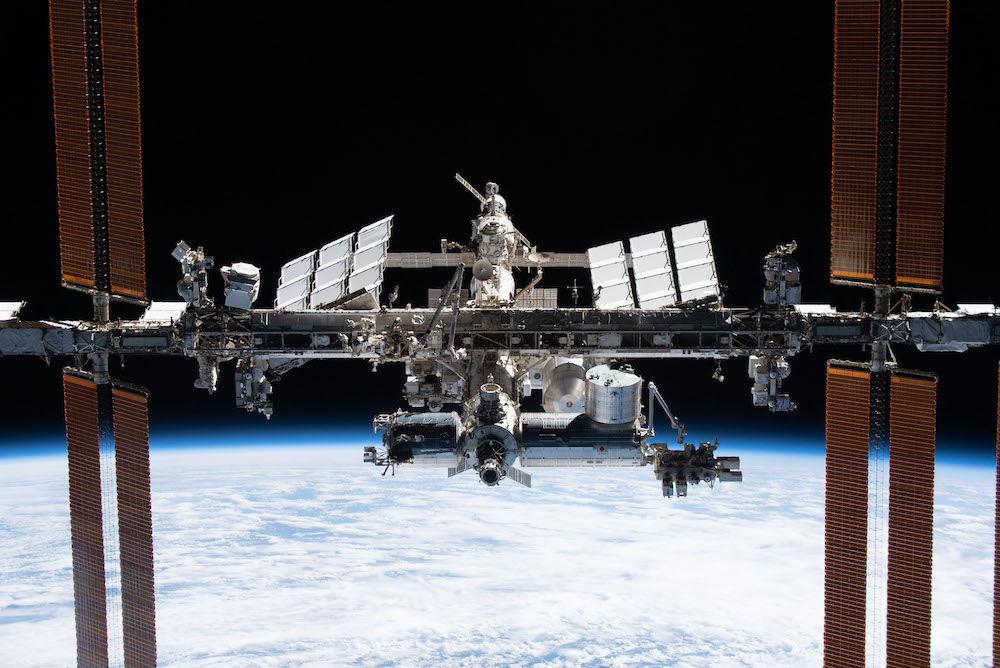 Photograph of the International Space Station taken from NASA's SpaceX Crew-2 on November 8, 2021. Courtesy of NASA.


It’s starting to feel as though scientists and governments announce new policies and predictions for our warming planet every week. But where do the data undergirding the alarming headlines and dire futurecasts come from? A great deal of what we understand about climate change comes from above. Satellites are one of our best tools for detailing how our actions are impacting the planet.

For decades, scientists have placed specialized sensors aboard orbiting spacecraft to better understand the world we live in. Approximately 4,000 active satellites currently orbit Earth. Most are military-related. But an estimated 900-plus are Earth observation satellites, including many that help us better understand anthropogenic climate change. They grew out of efforts dating back to 1960, when NASA launched its first weather satellite, Television Infrared Observation Satellite-1 (TIROS-1). TIROS housed sensors that tracked the weather, and it was a resounding success. For the first time, scientists could view storms in near real-time as they developed in the atmosphere.

NASA’s Nimbus program followed in 1964, with sensors that distinguished between snow and rain during precipitation events and tracked snow depth and accumulation rates in the Arctic. Nimbus instruments also measured ozone concentrations in the atmosphere, observed plankton in the ocean (to keep tabs on oceanic health—as water warms and acidifies, plankton die off and produce less oxygen), and monitored sulfur dioxide emissions from volcanic eruptions (to understand when elevated concentrations of the gas might cause respiratory problems and rising temperatures).

Neither TIROS nor Nimbus was designed to track climate change, but they demonstrated that future satellites could do so. Over the half century that followed, nations launched hundreds of earth observation satellites, each loaded up with arrays of instruments that charted things like CO2 concentrations in the atmosphere and deforestation across the planet. They continue to deliver crucial measurements today, using many unique sensors, but with a few basic types among the most common.

At least when it comes to collecting information, international collaboration has created a gigantic, global web of satellites that’s contributing to a more comprehensive understanding of what’s happening on the planet.

Synthetic aperture radar, or SAR, sensors are also common aboard earth observation satellites.  These sensors bounce pulses of energy off an object and measure how long it takes the energy to arrive back to determine how far away the object is. Spaceborne SAR sensors can be used to detect caves and sinkholes, to measure glacial movement, to determine the extent of damage caused by forest fires, and to detect and measure oil spills.

Thermal sensors are designed to detect heat coming from the planet’s surface. They can be used to identify potentially active volcanoes, to measure ocean and land temperatures, and to help detect wildfires.

Beyond collecting observations, there’s another way satellites advance climate knowledge: by forging collaborations. Slowing global warming will require intense cooperation between agencies and countries, and earth science is one of the few areas where such teamwork is the norm, rather than the exception—in part because of satellites. It takes hundreds or thousands of engineers, programmers, and testers years to prepare for a launch.

NASA partnered with what is now the National Oceanic and Atmospheric Administration (NOAA) on TIROS, and the agencies still share responsibility for the program. NASA and the United States Geological Survey are partners on another important program, Landsat, the longest continuously running satellite-based Earth mapping project.

The European Space Agency (ESA)—itself an intergovernmental organization of 22 member states—collaborates closely with U.S. agencies, including on ESA’s Sentinel satellites, which are a wealth of information for the world’s climate scientists. The Sentinel mission’s most recent launch, the Sentinel 6 Michael Freilich satellite, was a collaboration between NASA, NOAA, and ESA.

It isn’t generally thought of as a satellite, but the International Space Station (ISS) is another example of a collaboration that has greatly advanced Earth observation from the skies. Working in conjunction with autonomous onboard sensors, the station’s astronauts—who have hailed from many different nations—operate sensors that allow scientists to capture data that can be hard for remote-operated satellites to detect. The ISS has proven particularly useful for coastal mapping and imaging natural disasters.

Moving forward, space agencies around the world will continue to partner to measure climate change. A partnership between NASA and the Indian Space Resource Organization, the NASA-ISRO SAR (NISAR) mission, will establish a baseline for large scale environmental change by imaging large swaths of the globe over a three-year period. The platform is set to launch in 2023. NASA will also maintain its close work with the Japan Aerospace Exploration Agency, sharing data and building sensors for each other’s satellites.

Reading the headlines from the recent Glasgow conference, it can feel like the world’s nations are at odds when it comes to climate change. But at least when it comes to collecting information, international collaboration has created a gigantic, global web of satellites that’s contributing to a more comprehensive understanding of what’s happening on the planet.

These satellites will continue to evolve, and the sensors aboard them will continue along with them. And if we’re smart, we’ll take advantage of the data they provide, take the drastic actions necessary to curb the harms we are doing, and preserve the planet for future generations.