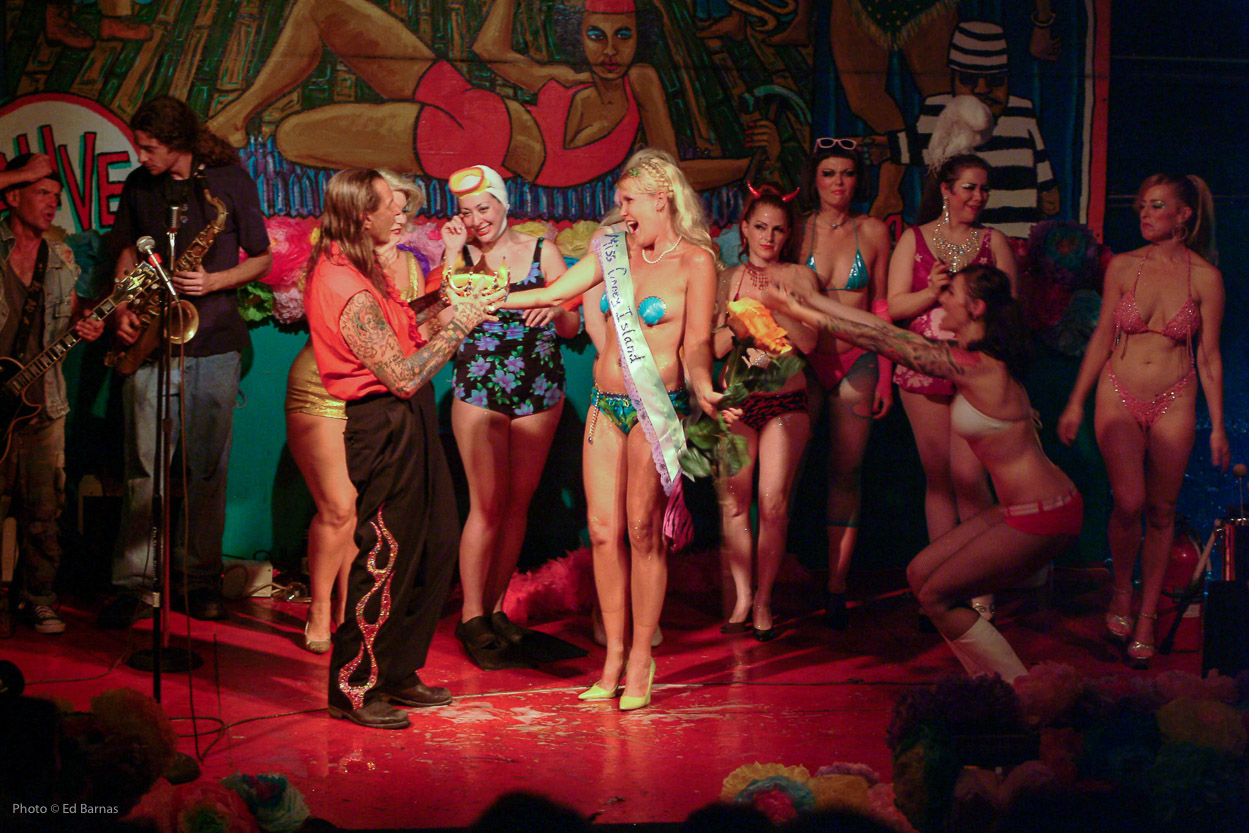 Miss Coney Island is a celebration of pageantry while poking fun at the toxicity of real pageants. Photo by Ed Barnas

Blush! I scream at my reflection. More blush!

I am backstage at the Miss Coney Island USA pageant caking on makeup. My actual eyebrows have been glued down—a technique learned from drag queens—and I’ve shaped new, exaggerated brows into a speculative arch that sits practically in the middle of my forehead. Below them, I’ve painted on clown crème makeup and bright turquoise blue eye shadow. A thick layer of glitter seals the look together. Glitter sticks to things that are wet, I like to say, the double-entendre evident in my inflection.

My muse here is Miss Piggy, the Muppet who balks when confronted with the concept less is more. “[T]hat is the most ridiculous thing I have ever heard,” she cries defiantly. “Less is less.”

All of us backstage at the competition are committed to rejecting the dictum less is less, and celebrating more is more, as we pile on the makeup, tease the wigs higher, and squeeze into the outlandish costumes that later that evening we will take off on stage.

This, if it’s not clear, is not your typical beauty pageant. At the Miss Coney Island, we celebrate oddity over perfection, individuality over conformity, and spectacular excess over static rules. The burlesque beauty pageant includes traditional pageant categories—evening wear, swimwear, talent—but instead of demanding perfection and promoting unattainable beauty ideals, it flips the well-worn formula and subverts the content, showing through exaggeration and parody the grotesqueness of unrealistic beauty standards.

While on the surface burlesque and pageants may appear to be regressive to the progress women have made since the feminist movement began fighting for equal rights, what we’re doing is really a continuation—not an abomination—of second-wave feminism’s employment of bold, agit-prop theatrics as activism and entertainment.

This goes back to 1968 when feminists staged a protest of the Miss America Pageant. Boy, did they put on a show!

While on the surface burlesque and pageants may appear to be regressive to the progress women have made since the feminist movement began fighting for equal rights, what we’re doing is really a continuation—not an abomination—of second-wave feminism’s employment of bold, agit-prop theatrics as activism and entertainment.

The New York Radical Women, a feminist group formed in 1967 that brought national attention to women’s equality, came up with the idea to protest on the boardwalk in front of the Atlantic City Convention Center the day the new Miss America was going to be crowned. I like to imagine them sitting around a circle together, drumming up ideas, each one more outlandish than the one before; one member scribbles everything down, and another offers up: well, let’s do it all, and see what sticks.

And they really did pull out all the stops. The “day-long boardwalk-theater event” included picket lines, guerrilla theater, and leafleting. They carried signs that read “All Women are Beautiful,” “Let’s Judge Ourselves as People,” and “Break the Dull Steak Habit,” a message that elaborated on another protest sign which featured an image of a woman with a cowboy hat on and nothing else. Her back faced the camera as she looked over her shoulder; lines drawn upon her body literally (and symbolically) carve it up into meat cuts: rib, loin, rump.

They also crowned a sheep as Miss America, and created a Freedom Trash Can as a receptacle for “woman-garbage,” as they put it: “bras, girdles, curlers, false eyelashes, wigs, and representative issues of Cosmopolitan, Ladies’ Home Journal, and Family Circle.” They planned to burn the Freedom Trash Can and all its “woman-garbage,” a nod to the burning of draft cards in protest of the Vietnam War. One woman mopped the boardwalk as she balanced a baby and various kitchen items in her arms, a performance intended to call attention to the devaluation of women’s domestic labor.

That day, the boardwalk became the stage for the New York Radical Women’s agit-prop theatrics.

But, as often is the case, time and distance have distorted what happened at this now historic event. This was the moment that bra burning became the symbol of second-wave feminism. But the Freedom Trash Can was never set on fire, and bras were never burned. And yet this is how the movement has been memorialized.

Focusing on the bra burning trivializes the movement and characterizes the protestors as somehow “unfeminine.” Distorting what really happened that day erases the playful, agit-prop theatrics that took over the boardwalk. As a result, second-wave feminists have been depicted as humorless, anti-men, and anti-sexual or, even more “outrageous,” same-sex desiring.

But the Miss America protest demonstrates that second-wave feminists were anything but humorless—they used lighthearted humor and playful tactics to address serious issues and demand equality. Not so coincidentally, neo-burlesque employs similar strategies. Burlesque is, at its root, parody, and neo-burlesque’s “making fun” has a double meaning: it pokes fun while encouraging spectators and performers to have fun. 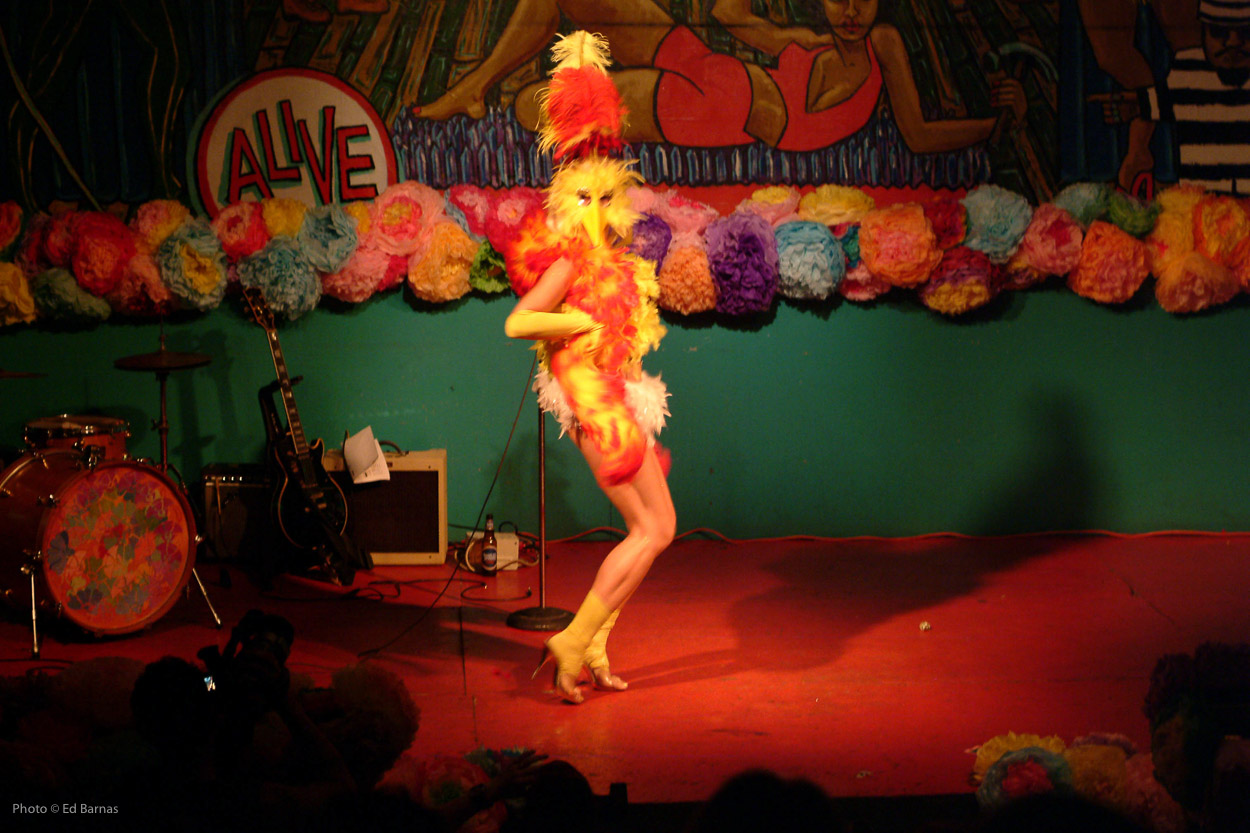 This is what the Miss Coney Island pageant is all about. As the founder, Bambi the Mermaid, puts it: “This is a weirdo pageant…. I don’t want to see you in your rhinestone perfection. I want to see you in a plastic bag with a seagull poking your eyes out.”

First staged in 2003 as a fully scripted one-off with a pre-determined winner, the pageant returned to Coney Island USA in 2004 as a “real” competition. Today, it has become a wildly popular annual show at Coney Island USA, a nonprofit arts and performance organization.

That night as we compete, parodic pageantry fills the stage. In the swimwear category, one of the contestants, MsTickle, sports bikini bottoms with the wings of a giant maxi pad poking out of the sides of her G-string. The year before, Little Brooklyn, a comedic burlesque performer, wore swim fins during the swimwear portion of the competition making her physicality belabored and awkward, the exact opposite of what typical, high-heeled pageant competitors intend and what judges seek out. For the talent portion, I performed “Miss Dairy Queen,” an act that recreates, in butoh-esque slow motion, the moment when a beauty contestant gets crowned and her face cracks and her beauty becomes grotesque. At the end of the act, I twirl six pasties, one for each udder.

Now, standing in the wings to take the stage for the crowning of Miss Coney Island, I can’t help but think that the New York Radical Women would have loved this show.

Each contestant is brought onto stage to thunderous applause. Rather than a panel of judges critically checking boxes off on a scoresheet like at a traditional pageant, the audience at Coney Island USA decides who wins. This time Julie Atlas Muz, who earlier performed a contemplative act that culminates in her peeing in a glass and appearing to drink it, is crowned Miss Coney Island. The weirdo eccentrics win this burlesque pageant, not necessarily the most traditionally “attractive” (though Muz could easily sweep the competition in both regards).

Today, in the spirit of second-wave feminism, burlesque performers intentionally adorn their bodies with “woman-garbage”: false eyelashes, corsets, and wigs. We reclaim and repurpose symbols of women’s oppression.

I am not proposing that women’s liberation will come from pasties and G-strings alone. But I am proud of how neo-burlesque continues the bold, agit-prop theatrics of previous feminist waves, reminding us all to have fun and slap glitter on serious issues so that they may shine bright in the spotlight for all to see.