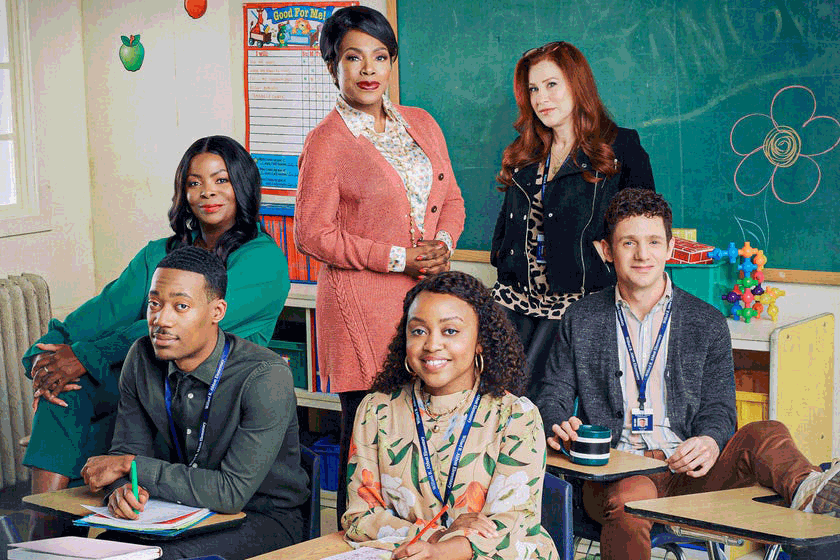 There’s an old adage that goes something like, “Be always sincere but never earnest.” The idea being that while sincerity engenders honesty, earnestness is hampered by its strength of conviction.

I promise I’m not a total monster—if I’m in the right mood or have found the right topic, I can also submerge myself in this genre of programming that, at its best, feels like taking a warm, soothing bath. But too often I’m left cold, dreading the moment when the show I’m watching will lose any sense of critical distance.

That’s why I put off watching Abbott Elementary. The breakout freshman ABC comedy about an underfunded primary school in Philadelphia follows in the excellent footsteps of The Office and Superstore before it. But because it’s been called the most earnest of these workplace sitcoms to date, I shied away from it at first.

When it returned from midseason break, and the hype hadn’t subsided, I finally gave it a shot. Unexpectedly, now I’m hooked, too. My mom has been a public elementary school teacher in Los Angeles for over three decades, and seeing these fictional teachers show up, day after day, for their students isn’t just comforting; it also feels honest to the work in a way that’s surprised me. It’s an example of how earnest storytelling can be done without losing touch with reality—in fact, creator Quinta Brunson’s willingness to engage with and even play against the messiness of the world to achieve this effect is an essential part of Abbott Elementary’s appeal.

It got me thinking about why earnest shows so often struggle to take off their own blinders. As it turns out, the answer has to do with when earnestness came of age in the Victorian era.

Earnestness flourished in 1800s, riding a wave of Christian evangelism: As Heidi Klum would put it, the high-spirited Regency dandy was out, and the morally earnest Victorian was in.

“This emphasis on earnestness was a backlash … against the frivolity and inconsequentiality of ‘old leisure,’ and against the easy assumptions of what the Evangelicals attacked as ‘nominal religion,’” historian Wendie Ellen Schneider explains in her fascinating book Engines of Truth: Producing Veracity in the Victorian Courtroom.

We may be seeing an increase of it in this moment, but like cynicism, earnestness is always in a constant cycle of rebirth, moving through the culture in different forms based on the needs of the present.

Victorian changes in social mores, which called on people to look toward society rather than the individual, gave rise to a host of charitable ideas and efforts (everything from the Salvation Army to the Ragged School movement, which provided free education for children who couldn’t afford to pay for it, came out of this period). However, the movement’s religious DNA also turned earnestness into a moral purity test of sorts. People, in turn, altered their behavior to appear righteous, above all else. “Truth,” as Schneider writes, “was often most highly valued as a sign of good character, rather than as of an end itself.”

Earnestness’ most famous critic, Oscar Wilde, did not mince words when it came to denouncing this farce. The poet and playwright, who was once the toast of Victorian London, was persecuted and prosecuted for his sexual orientation; he had no illusions about how dangerous earnestness could be. Which is why, as scholar Kerry Powell writes in Oscar Wilde and the Theatre of the 1890s, Wilde used his most famous drama to take on that “keystone Victorian ideal of earnestness—with its aura of zealous effort, sincerity, and high seriousness.” Importantly, by the end of The Importance of Being Earnest, upright protagonist Jack and his wild alter ego Ernest have become one. In turn, Wilde shows us the absurd nature of earnestness. Because to be earnest, or well, Ernest, in Wilde’s mind, was to be “the ‘true liar,’” as Powell explains, “who overcomes dreary actuality with charming delusions… without reference to clumsy fact.”

It’s a damning indictment, but also one that might suggest why earnestness remains alive and well in popular culture today: because earnestness offers its own escape from the messiness of reality.

It’s no accident that TikTok, which may as well be ground zero for earnest content, has become the most downloaded social media app in the world. When the algorithm locks onto your taste, you lose yourself in the scroll, as the screentime tracker on my iPhone can surely attest. With features like Stitch, which lets you add other viewers’ video to your own, and hashtags like #DontLetItFlop, which encourages you to upvote a video someone has worked hard on, the app can make you feel part of a closed ecosystem that’s supportive and collaborative. The company even commissioned a Nielsen study to prove as much, arguing the findings showed that “users feel like they can be themselves [and] trust others to be authentic and genuine as well” on TikTok.

Of course, aside from the well-documented toxicity that plagues the platform, it’s easy to forget just how much artifice is literally baked into TikTok. In 2020, the Intercept reviewed internal documents that showed moderators had been instructed to narrow the audience for posts created by “undesirable” users who didn’t fit the age, socioeconomic status, or appearance profile TikTok was courting. To quote Powell, the Wilde scholar, those clumsy facts, indeed.

That’s why Abbott Elementary, which has not shied away from addressing the many issues facing public schools—I particularly loved an episode where the teachers launch an academically gifted program and have to confront what being “gifted” means—feels like such a welcome change. It’s a big-hearted show about teachers who care about their students and their futures, but doesn’t exist in some happy alternative universe.

I’ll always be a 30 Rock girl at heart, but this has given me a newfound appreciation for earnest content. Which is a good thing, because earnestness isn’t going away anytime soon. We may be seeing an increase of it in this moment, but like cynicism, earnestness is always in a constant cycle of rebirth, moving through the culture in different forms based on the needs of the present.

Take Parks and Recreation and Hamilton, both of whose DNA helped set the scene for this age of earnestness. Out of the thrall of their immediate cultural moment, it’s easier to see them as products of Obama-era optimism that don’t always look critically enough at their subjects. But it’s not a surprise that both properties resurfaced earlier in the pandemic, one with a reunion special and the other with a film adaptation. That’s because at their best, they radiate the kind of human connection and warmth that people need.

Maybe this is too earnest of me (or maybe I’ve been watching too much of The Kelly Clarkson Show, yet another offering to this earnestness cycle that has unexpectedly given me joy) but I think earnest culture has more to give us yet—that is if we’re willing to see the importance of being earnest clearly.