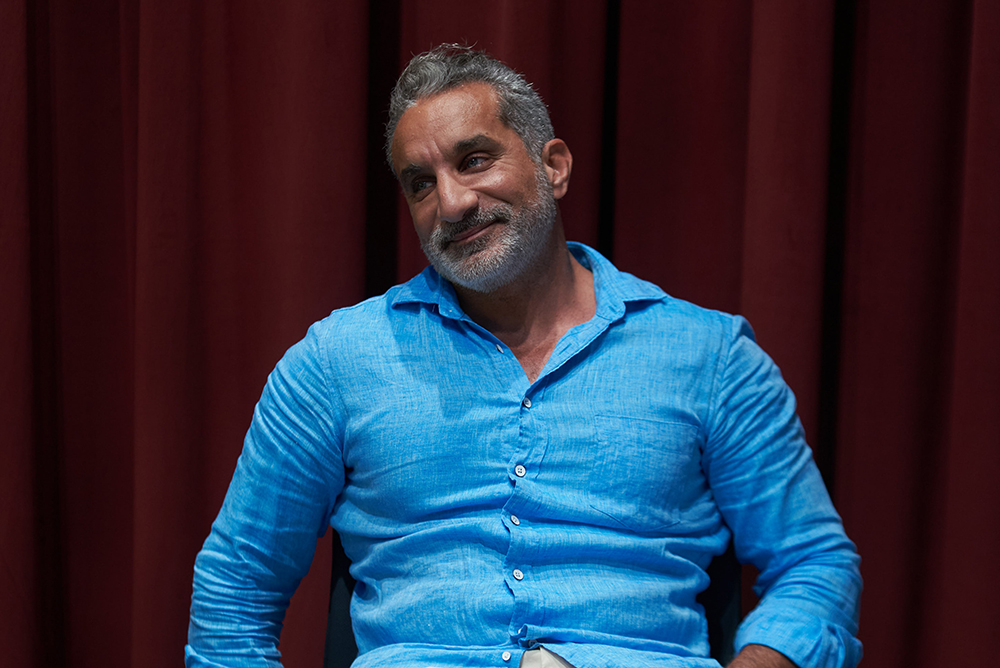 Bassem Youssef is a political satirist who was the host of Al-Bernameg, an Egyptian satire TV show that aired in the wake up the Arab Spring. Included on TIME magazine’s most influential list in 2013, he’s also the subject of the documentary film Tickling Giants. Before sitting down for the Zócalo/ASU Gammage event “What Can We Laugh About?,” Youssef sat down in our green room to talk about his career before comedy, what inspires him, and fighting Jon Stewart.

What is your favorite Egyptian dish?

Stuffed grape leaves—especially if you put yogurt on it. [I’m vegan but] now there’s vegan yogurt, so I can enjoy it.

What did being a surgeon teach you?

Being a nerd, perseverance, just doing the work and not complaining.

If Jon Stewart, Stephen Colbert, and John Oliver got into a fight—who would win?

I think John Oliver and Stephen Colbert would let Jon Stewart win out of respect.

You were the subject of the documentary Tickling Giants. If there was one giant in the world that you could tickle, who would it be?

Who do you carry around inside your head?

A very worried version of me. I worry about being relevant, being successful, having work.

What’s one of the most haram (forbidden) things you’ve done that you’re willing to put on record?

I can’t put it on the record. It’s between me and the angels.

What is something that made you laugh as a child?

The Muppet Show. My favorite was Animal.

Where do you draw inspiration from?

Watching people that I respect, like [the late] Robin Williams and George Carlin.

Where can we find you on a typical Sunday?

What do you find most beautiful about the world?

A very clear night with clear skies where you can lie down and look at the Milky Way with no light pollution.