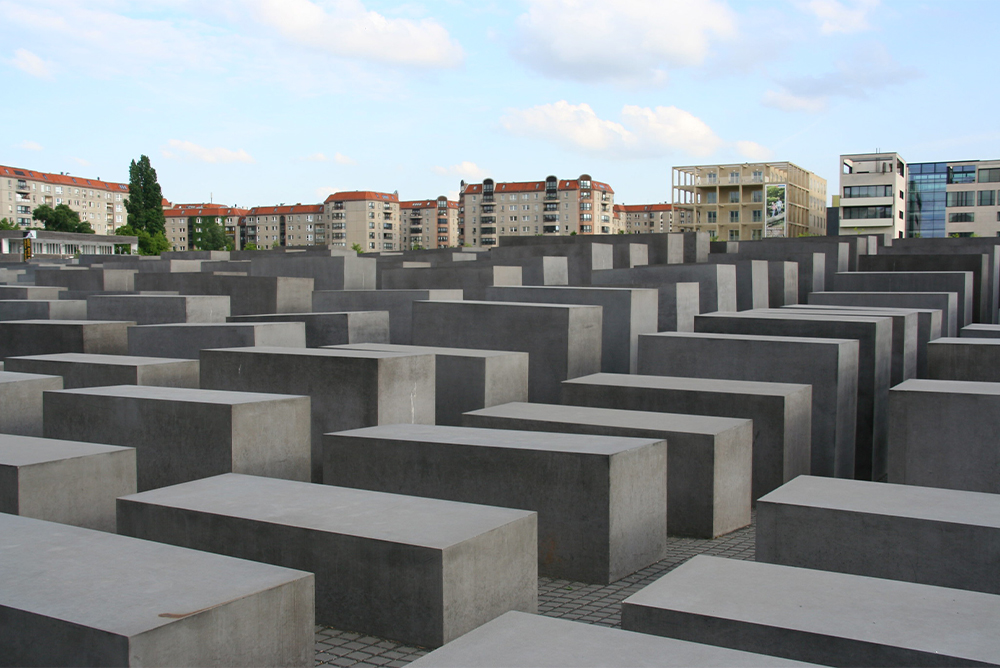 
Germany does not have a traditional, centuries-old national holiday, such as July 14 in France or July 4 in the United States.

But Germany is carefully attuned to dates, and how they might be used to reckon with the history of dictatorships, encourage the maintenance of memorial sites, and spark remembrance in ways that draw the public to past sins, and provide vital information and moral orientation.

Reckoning with and making restitution for the Nazi dictatorship of 1933­–1945, World War II, and the deaths and persecution of millions occupies Germany to this day—and probably will forever. The ongoing German work of remembrance around dates also should remind us of how frequently used phrases like “coming to terms with the past” (“Vergangenheitsbewaeltigung”) or “processing the past” constitute a rather helpless vocabulary, and provide only a generalizing veil for specific historical crimes.

In the immediate aftermath of World War II, the occupying Allies took the first steps to punish those most responsible for the Nazi regime, to reorganize the government, and to begin to compensate the Nazis’ victims. But they did much of this work at a distance. The newly installed powers within Germany, on the other hand, were more entangled in old patterns, and often remained ambivalent about the continuation of denazification and democratization. In any case, the population tended to deny and repress recent crimes and, above all, lament their own victims of the war.

But over many years, beginning in the late 1940s and into the early 21st century, Germany developed a “policy on the past” and established days of remembrance. The process took different paths in the Federal Republic of Germany (West Germany) and the German Democratic Republic (East Germany). But everywhere, its influences included court proceedings, historical research, art, and media, as well as political events like the trial of Adolph Eichmann in Jerusalem in 1961­–2, the reunification of Germany in 1990, and debates around the Holocaust memorial in Berlin, which opened in 2005.

Over the decades, Germany would come to commemorate a number of dates—not as national holidays but in conjunction with a heterogenous group of organizations and individuals, including government. The shifting commemorations and days include the end of World War II in Europe on May 8, 1945, the anti-Jewish pogroms of November 9, 1938, and the liberation of the Auschwitz concentration camp on January 27, 1945.

Beginning in the late 1940s, first the Soviet-occupied zone and then the German Democratic Republic celebrated May 8 as the victory of the USSR and of anti-fascism. But the Western parts of the nation occupied by the U.S. and other Allies didn’t mark the date. In 1965, the Federal Republic of Germany’s government wanted to highlight the 20th anniversary for the first time as a kind of “end of the post-war period,” celebrating successes in reconstruction, consolidated democracy, and the prospect of reunification—but the Allies rejected the idea.

After years of routine events, in 1985, Federal President Richard von Weizsaecker made a speech interpreting May 8, 1945 no longer as a day of military defeat but as the “Day of Liberation.” He received some public criticism, but this statement marked a turning point for May 8. It reduced the attention on Germany’s own post-war grievances, and focused more attention on those whom the Nazi regime had killed and persecuted.

It has taken quite a long time to establish adequate forms and days of recollection for victims of the Nazi regime.

In 1946, the U.S. military took the first steps toward commemorating the Holocaust, remembering the destruction of the synagogue at Frankfurt’s Börneplatz on November 9, 1938. Similar commemorations followed elsewhere, with widespread media coverage throughout Germany (then divided into four zones of Allied occupation) on the 10th anniversary on November 9, 1948. But no centralized events took place.

It has taken quite a long time to establish adequate forms and days of recollection for victims of the Nazi regime.

In the Soviet Occupation Zone (later GDR, or East Germany) a “Day of Anti-Fascism” was set up on the second Sunday of September 1946.  But its strong emphasis on military and political victory soon pushed aside Jews as victims, focusing instead on the deaths of “political” anti-fascists. Meanwhile in the Federal Republic (West Germany), November 9, 1938, would gain greater importance.

Very soon, however, a different and competing line of remembrance was started as a “National Day of Mourning” for all German victims of war, following a tradition which began after World War I. This focus on the fallen soldiers and other war dead remained far removed from the fate of the victims of Nazi dictatorship, and the topics of German guilt and responsibility. Only the states of Hesse and Hamburg dedicated the national day of mourning as a “day of remembrance for the victims of National Socialism and the dead of both world wars.” During the 1950s, the victims of the Nazi dictatorship received more attention in commemoration, but the victim community remained tied to the German dead.

Since the early 1950s, Jewish communities in cities such as Frankfurt, Munich, and Berlin have driven initiatives to hold days of remembrance on November 9, along with victims’ organizations and opposition groups. Although the state did not sanction these commemorations, eventually more municipalities took part.

The number of memorial sites to Nazi victims also increased rapidly, especially after a wave of new attacks against synagogues in 1959 and 1960. In the decade leading up to the 40th anniversary of November 9, in 1978, the number of commemorative events increased tenfold. Historical research and publications began to offer in-depth accounts of the anti-Semitic November pogroms of 1938—and of the German population’s widespread acceptance of those attacks.

By the late 1970s, this day of remembrance had been firmly anchored at the national level. The federal president and other representatives of national government and parliament were observing the day, which students also study in school. This movement in turn inspired more local research, media projects, and discussions in small towns and rural areas. The American television series Holocaust, about a fictional Jewish family, also spread interest in the subject after several parts appeared on German television in 1979. The term “holocaust” became part of the German language, thanks to the show.

Today, November 9 has developed into one of the most important days of remembrance, recalling the date when Nazi organizations destroyed synagogues, attacked, killed, or expelled Jews, and deported many to concentration camps. Germans for too long downplayed this series of events as “Reichskristallnacht,” the night of broken glass, which doesn’t acknowledge the full extent of its horrors. The day of commemoration transformed November 9 into a symbol of the horrible path to the “final solution” of annihilation of German and European Jews. Germans, over time, began to understand crime, guilt, and responsibility in their historical and moral dimensions.

Other days of commemoration also advanced this process. The Society for Christian-Jewish Cooperation chose a “Week of Brotherhood” in March 1952 to focus solely on commemorating the persecution of the Jews. This week was initially devoted to seeking religiously motivated mutual understanding with the small number of surviving German Jewish citizens. But it expanded over time and contributed significantly to the clarification of historical facts and responsibilities of the Holocaust. More recently, however, the week has lost importance, in part because of the secularization of society.

A different theme concerns July 20, 1944—political resistance against the Nazi regime, remembered through Claus Schenk von Stauffenberg’s failed assassination attempt on Adolf Hitler. As early as October 1951, the Federal Republic of Germany’s government marked this day—both to honor resistance and to counter accusations of treason by old Nazi supporters and former military personnel. Annual commemorative speeches on July 20 by high state officials, and more recent events that include some military rituals, have achieved considerable media coverage. The commemorations are effective because of the drama of the attempted assassination, and the personal story of the executed assassin, Count Stauffenberg, and his co-conspirators. But they have also come under fire for focusing on military elites rather than the resistance of trade unions, left-wing parties, and everyday people.

Today, the official commemoration day of German state organs, explicitly dedicated to all victims of the National Socialist system of oppression, and especially to the murdered and expelled Jews of Europe, is January 27. That is the day in 1945 when Soviet troops liberated the Auschwitz-Birkenau concentration and extermination camp. President Roman Herzog first dedicated this day in 1996, and since 2005, it also has been International Holocaust Remembrance Day. Each year, the German Bundestag in Berlin holds commemoration events with contemporary witnesses, international experts, and political representatives, including from Israel and neighboring European countries. The state parliaments and governments of Germany, and many local authorities, also follow this practice—implying a political self-commitment of state institutions to permanently respect this occasion and its mandate.

Although November 9 retains its importance, January 27 has become a more powerful commemoration because it was established after German reunification in 1990, and it integrates the very different patterns of memory in West and East Germany.

Today, rising xenophobia, racism, and right-wing extremism are placing new pressures on Germany—and on the contribution remembrance, and days of commemoration, make to society.  Germany’s culture of remembrance may well deliver some relevant lessons and moral enlightenment necessary to secure freedom, democracy, and peace.

Since some right-wing activists quite openly proclaim allegiance to Hitler and Nazi ideology, it is much more necessary to use historical facts and moral arguments in everyday political dispute to counter their horrible beliefs and propaganda. The German pledge “Never again” will be needed on streets, in speeches, and in all kind of media for the foreseeable future.