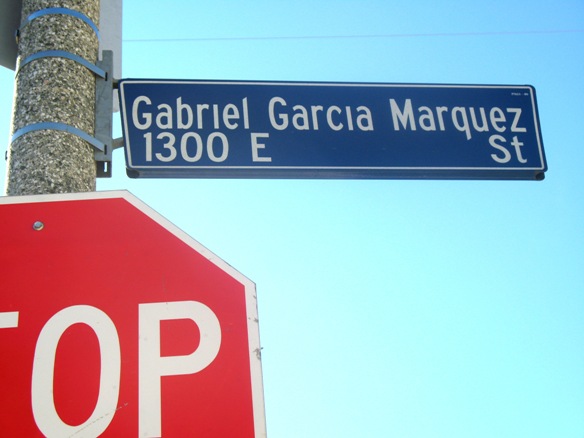 Los Angeles City Council motions are not known for their poetry. But the Council’s decision six years ago to change the name of a few blocks of Clarence Street in Boyle Heights — then best known for providing a moniker to a street gang — to Gabriel García Márquez Street, moved its members to write phrases of art, if purplish ones. “The world of García’s fiction is a magical realm where the strange and exotic can suddenly become comfortably familiar, and the whole concept of an objective reality is put in question,” the motion reads. “Here, the borders between life and death swirl together in a gentle and mysterious twilight, and – if we allow it to possess us – love can strike flaming miracles from the ashes of our soul.” Below, an excerpt from the man himself, on his birthday.

“He had been a reader of imperturbable voracity during the respites after battles and the rests after love, but a reader without order or method. He read at any hour, in whatever light was available, sometimes strolling under the trees, sometimes on horseback under the equatorial sun, sometimes in dim coaches rattling over cobbled pavements, sometimes swaying in the hammock as he dictated a letter. A bookseller in Lima had been surprised at the abundance and variety of works he selected from a general catalogue that listed everything from Greek philosophers to a treatise on chiromancy. In his youth he read the Romantics under the influence of his tutor, Simón Rodríguez, and he continued to devour them as if he were reading himself and his own idealistic temperament. They were impassioned readings that marked him for the rest of his life. In the end he read everything that came his way, and he did not have a favorite author but rather many who had been favorites at different times.  The bookcases in the various houses he lived in were always crammed full, and the bedrooms and hallways were turned into narrow passes between steep cliffs of books and mountains of errant documents that proliferated as he passed and pursued him without mercy in their quest for archival peace. He never was able to read all the books he owned. When he moved to another city he left them in the care of his most trustworthy friends, although he never heard anything about them again, and his life of fighting obliged him to leave behind a trail of books and papers stretching over four hundred leagues from Bolivia to Venezuela.”

-from The General in His Labyrinth