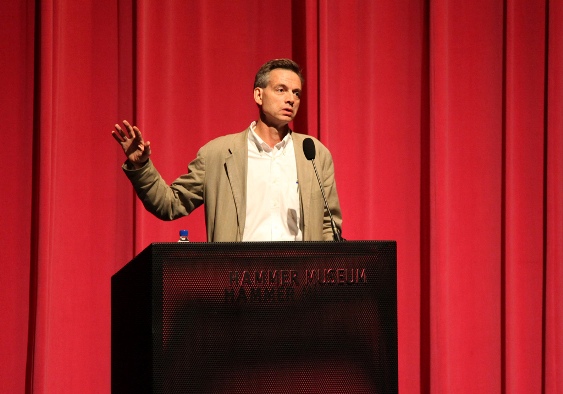 “It might seem ironic to write a long book about religion whose point is that religion doesn’t matter,” Wright joked with the audience at the Hammer Museum. “It’s probably suboptimal from a marketing standpoint as well.”

Wright, also a Schwartz Senior Fellow at the New America Foundation and co-founder of Bloggingheads.tv, called his latest book a “3-D biography of God.” But at his lecture he focused particularly on one aspect: God’s alternately benevolent and belligerent tone, as recorded in the Bible and the Koran. Wright explained that while scripture and religion aren’t by any means irrelevant, the circumstances on the ground at the time of writing or practicing might better explain the changing moods of God and his followers.

“Any book with a title as grandiose as The Evolution of God should purport to derive at least one fundamental law of the universe,” Wright joked, terming his the Law of Religious Tolerance. Applying game theory, Wright explained his argument for why people alternately focus on the good or the bad of any particular religion at any particular time. When believers of one religion imagine that their loss is the nonbelievers’ gain – a zero sum situation – they are much more likely to be belligerent, Wright said. Likewise, when believers see opportunities for mutual gain – a nonzero-sum game – they are likely to be peaceful. It is a basic element of human psychology, Wright said. “If you have a rival for a job or a mate or something, I think you will probably appraise them pretty critically,” he said. “It may just be me. But I like to think the average person is at least as bad as I am.” The perception of these relationships – and it is the perception that is key, Wright noted – has shaped the histories of Christianity, Islam, and Judaism, and their relationship with each other. 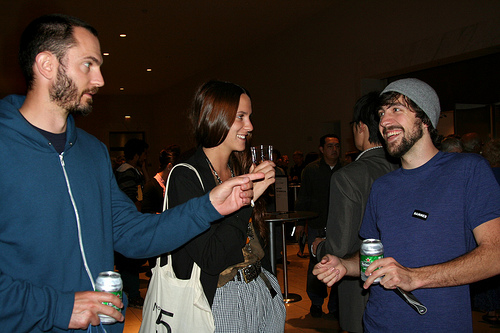 Wright applied his theory to a particular story in the Hebrew Bible – the appearance of monotheism in ancient Israel, which he believes occurred as late as the sixth century BCE, rather than centuries earlier as the Moses story would have it. The evolution toward monotheism, Wright argued, happened as a nonzero-sum viewpoint that tolerated other gods transformed to a zero sum world view that did not. “I’m going to say some unflattering things about God at the time of the emergence of monotheism, but there is a happy ending,” Wright promised.

Wright began by noting that the Bible acknowledges King Solomon’s polytheism. The third king of Israel reputedly had 700 wives, many of them foreign. While the Bible suggests that the wives talked him into worshiping the gods of foreign lands, Wright posits that polygamy and polytheism both came from the same root cause: King Solomon’s desire to practice a nonzero-sum sort of internationalist foreign policy. That is, he sought to build cooperative relationships with many countries both by marrying their citizens and honoring their gods.

In the eighth century BCE, Hosea became the first prophet to insist that Israel worship only Yahweh (if, Wright emphasized, one accepts the standard dating of prophetic texts). Hosea practiced monolatry – worshiping only one god, but not denying the existence of others. At that point, Wright noted, Israel had a dimmer view of its relationships with its neighbors. Hosea, unhappy with deals Israel made with greater powers of the day, like Syria and Egypt, wrote that Israel would “writhe under the burden of kings and princes.” After Hosea, the prophet Zephanaiah had what Wright called “a very nationalist air” as he spoke of apocalypse, and of Yahweh punishing those who worshipped other gods. King Josiah, who ruled shortly before the exile, who actually purges the relics of rival gods from Israel, like depictions at the Jerusalem temple of Asherah, believed to be the wife or consort of Yahweh (“one of the many things in my book that I did not learn in Sunday school,” Wright joked). Gods other than Yahweh were, Wright emphasized, rivals to the power of the king, who interpreted the will of Yahweh.

During the Babylonian exile, monotheism finally seems to take hold. Though Wright noted that the most commonly quoted line of Second Isaiah is the benevolent-seeming “Israel shall be a light unto the nations,” the text is packed with vivid, violent language, corresponding with the conquest of Israel. 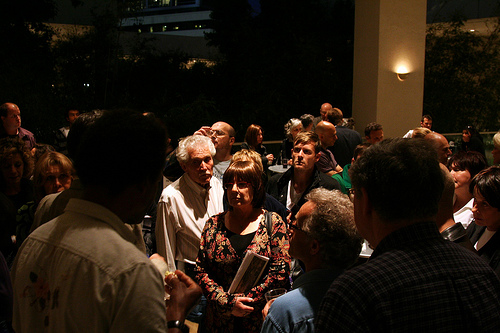 Monotheism wasn’t all bad, Wright emphasized. When Cyrus the Great of Persia conquered the Babylonians, he allowed a return of exiles to Jerusalem and afreedom of religion. During this time, the scripture and the God in it are benevolent and forgiving.

Similar logic could apply to the modern world. It isn’t far-fetched, Wright argued, to compare the Israeli mindset during exile with that of the Palestinians today. “It’s not something youe xpect to bring out the best in a religion,” Wright said, noting in Q&A that the Israel-Palestine conflict is, ultimately, about land more than religion.

Bringing out the best in religion today – whether a reconciliation of religious belief with science or a conceptualization of all religions as worshiping a common godhead – won’t necessarily be easy. What Wright called the “new atheists” aren’t helping either – they stoke antagonism, and their foreign policy is, Wright said during Q&A, “fundamentally right-wing” in that it ignores grievances underlying religious conflict and blames religion alone.

Wright, raised a Southern Baptist, closed with “a special sermon.” All prophets of the Abrahamic religions captured one key truth, he argued: that “salvation is possible so long as you align yourself with the moral axis of the universe.” Noting that he took salvation to mean the peace and order of society, and moral axis of the universe to put God in abstract, nontheist language, Wright said, “I think there’s really some truth to it.”

See more photos of the Hammer event here, and of the San Francisco event here.