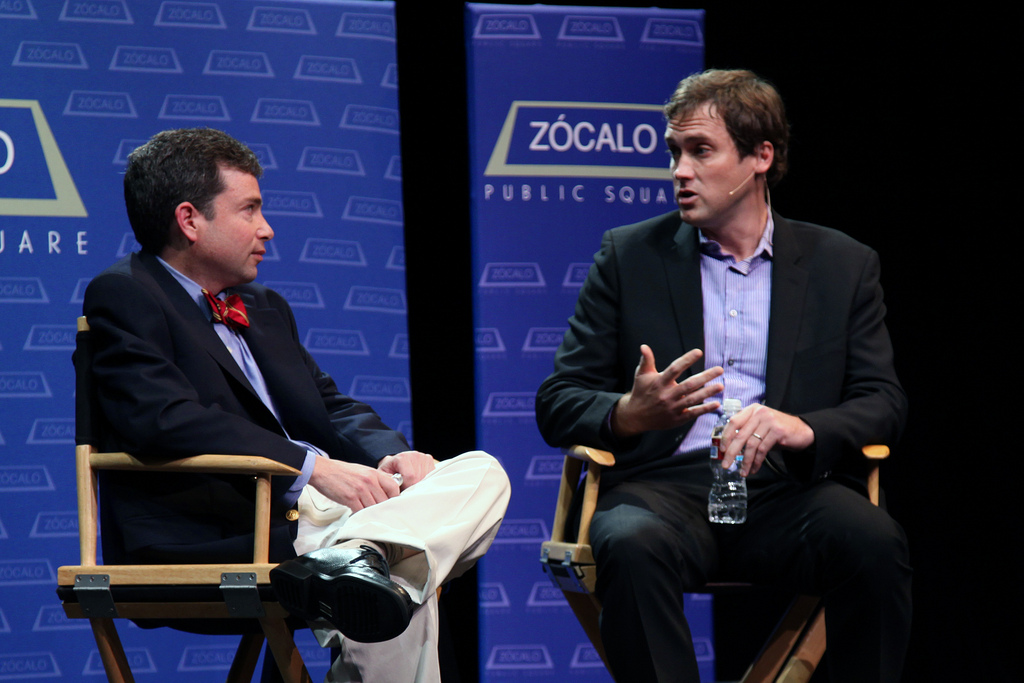 Traffic can be good.

Bloggers facing high traffic can quit their day jobs. Retailers work to increase traffic year-to-year. And for Germans, the word for traffic means something entirely different.

In German, “The word traffic is synonymous with intercourse,” said Tom Vanderbilt to the crowd at The Actors’ Gang in Culver City before wondering if his book Traffic

would have sold more copies if the German translation hadn’t been called “Auto.”

Even in the world of automobiles, traffic doesn’t always mean congestion. “One person driving, one person walking, is traffic,” Vanderbilt said. He joined UCLA transportation scholar and Freakonomics blogger Eric Morris at Zócalo to discuss traffic in its full scope: from the psychology of driving to how Delhi drivers manage to survive their commutes to how Americans can drive better and safer. 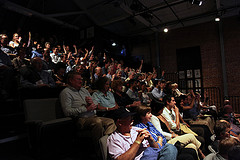 As Morris put it, when we’re driving, “human beings are essentially animals attempting to act like machines.” Driving can seem a daunting task: we process 1,300 pieces of information for every mile we drive, Vanderbilt said, and make 40 decisions and, inevitably, a few mistakes. We manage to pull it off because of the way we see when we drive, he explained. We strip away peripheral vision. The image of the road expands on our retinas slowly while neighboring cars don’t seem to move. “If you looked down at the street it would be an entirely different situation,” Vanderbilt said. He hypothesized, too, that we can evolve as drivers. Over the last two decades, drivers have inched closer and closer to the car ahead – in part because of better cars and better breaks, but also, Vanderbilt suggested, because we’ve adapted to drive closer to one another while still driving safely.

But there are some shifts we can’t make. We’re adapted, Morris pointed out, to functioning in groups of 100, to caring about reputation and doling out punishment for bad behavior. Traffic doesn’t allow for such interaction, despite some proposals to have “How’s My Driving?” stickers on every car – creating what Vanderbilt called a “massive reputation management system,” something like ratings on eBay. But driving only leaves us, for various reasons, mired in road rage, or overly grateful for the slightest hint of altruism from a fellow driver.

Human driving behavior, of course, can be segmented further. Morris gave Vanderbilt a chance, as he put it, to “Larry Summers yourself” by discussing the differences between the sexes when it comes to driving. Vanderbilt admitted that “men create more of the trouble on the road.” Men take more risks, like drinking or not wearing helmets or driving fast, and are involved in more fatal crashes. Women are involved in more minor crashes, and are on the receiving end of more honks. Broadly speaking, women create more congestion than men, Vanderbilt said. Now, what he called the “Ozzie and Harriet, Leave It to Beaver commute” – in which the dad arrives home effortlessly on time for “cocktails and Cronkite” – is long gone. Women’s commuting miles are catching up to men’s. And women still do more of the errands, whether it’s shopping or taking kids to school. (Significantly fewer kids walk to school, Vanderbilt noted.) 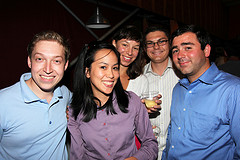 Where drivers are from changes driving habits as well. On Vanderbilt’s first trip to Delhi, a taxi driver gave him what Vanderbilt hoped was a “pearl of wisdom,” but which turned out to be something of a slogan for drivers in the city: “Good horn, good brakes, good luck.” In China, Vanderbilt saw drivers on state-of-the-art highways stopping on medians to go to the bathroom. In Copenhagen, people rarely jaywalk, despite their country hosting a large anarchist commune. “These are law-abiding anarchists,” Vanderbilt joked.

Social norms – along with technological factors like the length of a do-not-walk sign – govern driving. Cities in the U.S. have different styles, too. New York is quickest to honk; in Pittsburgh, cars sometimes don’t yield to traffic when turning left; and in Portland, bikes are becoming a new norm. In Vanderbilt’s view, Angelenos are good, fairly nice, but very fast drivers. As for his own driving habits, Vanderbilt, like many a New Yorker, has a “divorced dad relationship with my car. I see it on the weekends.” Still, he worried about driving safety, and writing Traffic, he joked, “put that many more neuroses in me.” 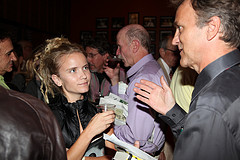 For fellow neurotics, Vanderbilt placed car safety issues in context. For all the fears about driving-while-phoning, “belts and booze,” he said, remain the major issues in car accidents. He did state unequivocally that texting is dangerous to do while driving. For the record, Morris informally polled the Zócalo audience and found very few used cell phones in their car, and fewer still dined while driving. More than half fiddled with the radio, however, prompting Vanderbilt to note that one of the earlier safety debates in automobile history occurred over installing radios in cars in the 1930s. The point, he said, is that driving is a “well-practiced automatic behavior,” and we rarely drive like we should. “If any of you have driven home from the hospital with an infant,” Vanderbilt noted, “it is the most intense driving experience of your life.”

Of course, there are many safety measures outside the car, some counterintuitive. Roundabouts are safer and can move more traffic than a standard intersection. Removing center lines leads to slower, and safer, driving. Trees and other structures lining streets, rather than wide shoulders, have the same effect, and narrow fields of vision, leading to fewer distractions. 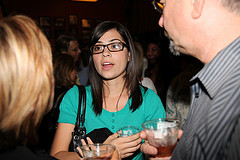 Vanderbilt, as a New Yorker, doesn’t drive much. But he doesn’t think we should quit the automobile, and argues instead that we wean ourselves off them. Technological changes like smarter lights and highway feedback can help clear congestion, but reducing car use also matters. The car, he said, has “morphed from being a transportation tool to being a life support system.” Cities need to change their cultures by creating new incentives and disincentives, like reducing parking, adding bike lanes, making way for shared car use. Downtown Los Angeles, Morris noted during Q&A, has so much parking that it can’t draw as many transit users as it could otherwise. It also makes for a less dense and less lively downtown.

But as Vanderbilt noted, even if solutions are available – from toll lanes to carpool requirements – charging people to continue to drive the way they do is “a nonstarter in Washington,” even though traffic congestion could be significantly reduced by a relatively small reduction in drivers. “It’s like the death panels of the transit world,” he said of fees. “There are any number of solutions [to traffic] – the matter is overcoming the political hurdles.” 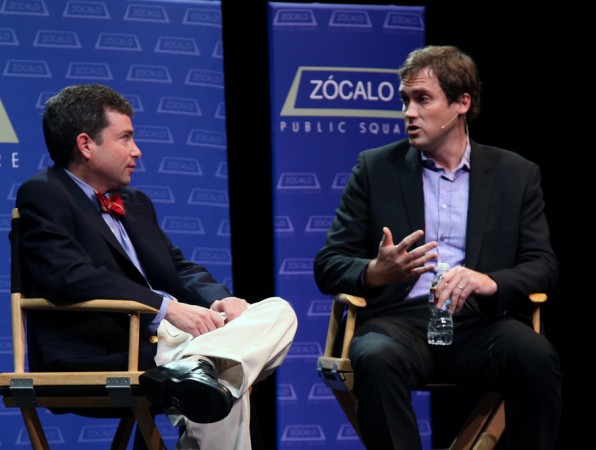