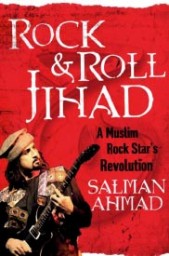 Rock & Roll Jihad is a straightforward autobiography of a man who, by age 18, knew exactly what he wanted to do with his life. Salman Ahmad, whose Sufi rock band Junoon introduced rock and roll to Pakistan, sees music as the cultural bridge between conservatives and progressives, East and West.

It is an unabashedly positive life summary – complete with introductory remarks by Melissa Etheridge and praise from Deepak Chopra. But it is also a light introduction to South Asia and Islam. Ahmad’s family history moves along with the history of Partition, when India and Pakistan became independent and separate nations in 1947. This history forms the backbone of his story: “I know that Pakistan had a long, rich history, with ancient civilizations and the most beautiful love poetry and music. So nobody was going to tell me that there wasn’t a place for rock and roll there.” Junoon merges the unmistakable harmoniums of old Bollywood tunes, the beating dhols and tablas of spiritual chants, and hard-rock bass lines and synthesizer riffs.

Ahmad’s writing is much like his music – it carries a simple, consistent rhythm and alternates between pop sensibility and diary-like expositions. His childhood memories and quick takes on politics and history mingle with surreal celebrity stories – playing cricket with Imran Khan, taking Mick Jagger to a red light district, meeting Princess Diana at a dinner party.

A son of Lahore, Ahmad spent six formative years in America, where he bought his first guitar and joined a high school band in a small town on the fringes of New York City. His family returned to Pakistan in 1981, to an urbane and elite life. Ahmad trained as a doctor but never pursued a career in medicine. The first time he performed in Lahore, when he was in college, his guitar was smashed by a member of a student wing of a Pakistani religious party. From then on, Ahmad’s musical career survived the dictatorship of General Muhammad Zia-ul-Haq, who implemented conservative Islamic laws and restricted music and culture, and the corrupt back-and-forth leadership of Benazir Bhutto and Nawaz Sharif. Changing political whims presented challenges – from death threats to distribution blocks – to a rocker trying to introduce something new in Pakistan.

At its best, however, this is not a political history. Ahmad is often forthright with his opinions, but Rock & Roll Jihad is most interesting when its politics are more subtle. Ahmad’s boyhood stories, for example, are more powerful than his direct commentaries. He recalls holidays in Swat Valley, before the Taliban takeover, and a college brawl he witnessed between Sunnis and Shias, whose distinctions meant very little to his Sufi grandmother.

These parts of Ahmad’s story beg a reconsideration of now-loaded words like jihad and taliban, and inspire an urge to get lost in the haunting music of Sufism. Certainly, the book is best read in concert with music – from Nusrat Fateh Ali Khan’s mesmerizing voice to the energy of the Beatles and Led Zeppelin. And Ahmad’s unique brand of Sufi rock is still the best storyteller, but Rock & Roll Jihad provides context that can make the listening experience richer.

Excerpt: “Lahore raised me as much as my family did. Pakistan was a teenager when I was born, struggling to come to terms with its newfound freedom. But the ancient city of my birth has a four-thousand-year history that’s been decorated and sculpted by the mists of time. It’s multicultural, boisterous, and steeped in a natural poetic sensibility, much like Junoon’s music aims to be. Lahoris say (in Punjabi) that anyone who hasn’t seen Lahore hasn’t started living.”

Additional Reading: Indian Summer: The Secret History of the End of an Empire

and Chronicles: Volume One