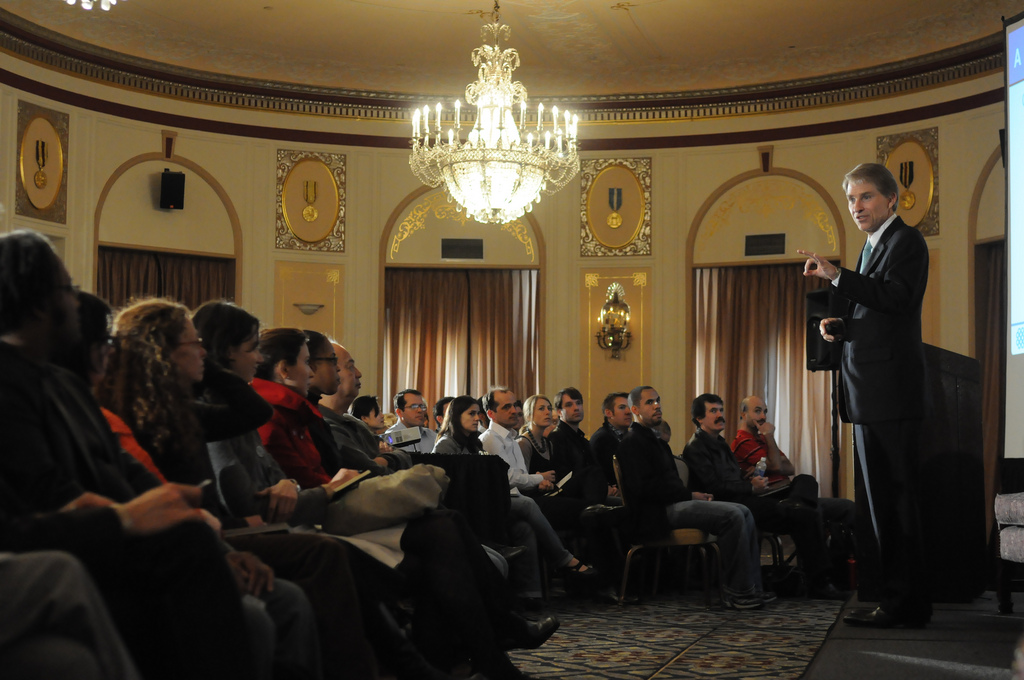 “Detroit said, ‘What, are you people mad out there in California? We’re supposed to make different cars for every state?’” explained Steve Westly, former California State Controller and author of two books on alternative energy.

But within months, every state in the country matched California’s law, and countries around the world soon followed.

At Zócalo and the New America Foundation’s conference, Where’s My Green Job, at San Francisco’s Marine Memorial Club, Westly outlined how far clean technology has come, how California can lead, and what to do about China.

Since California’s work to clean up car emissions decades ago, the state has continued to lead on environmental policy, Westly said. Los Angeles has been a prime beneficiary of stronger environmental regulation, seeing cleaner air every year for decades. More recently, the state pledged to meet 20 percent of its energy needs with renewable sources by 2010, a goal that the state is largely on track to meet. Gov. Arnold Schwarzenegger has set a new goal of 33 percent renewable energy by 2020, Westly said, at a time when “Washington is paralyzed, saying, ‘Can we get to 14 or 17 percent?’” California also pioneered stem cell research with its Proposition 71. “We all hear complaints that Sacramento is broken,” Westly said. “From a global standpoint, we are still leading.”

The boom’s only just begun 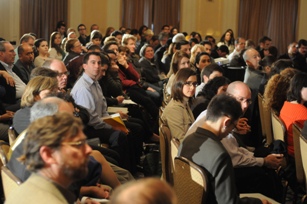 The state government isn’t the only leader on clean technology. Ten years ago, Westly noted, many investors would have said “there is no clean tech venture capital.” Today it has surpassed biotech and information technology to be the largest venture segment. California companies are pioneering new technology, Westly said: Tesla is producing electric cars; Amyris is making diesel and jet fuel that emits 80 percent less carbon than the standard; Sunpower is developing solar cells. Arizona, Florida, and New Jersey companies are innovating in the field as well, Westly noted, and “are dying to pass us.” Florida is building a solar power facility that will generate 70  megawatts of electricity, and Dulles Air Force Base – “those liberal thinkers in the U.S. Air Force,” Westly said – is working on a 500-megawatt solar facility.

The companies make for sound investments as well. A122, which makes batteries for electric cars, went public with a $2 billion market cap; Silver Spring Networks, which focuses on efficient energy, is expected to go public later this year with a market cap of $3 billion. “It’s not about PhDs, MBAs, and Tesla owners,” Westly said. “It will have a broad effect on our economy.” Jobs at Tesla, for instance, certainly include engineers and marketers, but also machinists and assemblers. All the companies need sales people, Westly said in Q&A, especially if salespeople have some basic technical background.

High-tech shouldn’t be the sole focus of the green movement, Westly noted. “Most venture capitalists want to talk about breakthrough algae findings 20 years out. It’s wonderful, God bless them,” he said. But blue-collar venture capitalism is crucial, as is improving the efficiency of buildings. Key policy efforts could make for a greener economy in the shorter term: Westly recommended retrofitting old buildings; increasing fees for solid waste dumping and more robust recycling policies; tax credits for energy efficiency; and expanding the state’s feed-in tariff to encourage renewable energy. Westly would also raise fuel efficiency requirements for cars and make sure AB32, California’s renewable energy effort, doesn’t get rolled back, as some gubernatorial candidates have proposed and a proposed ballot initiative aims to do. 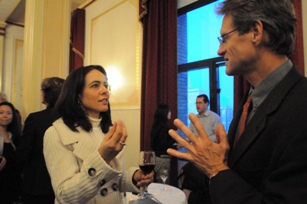 California’s long leadership in the clean-tech field could be challenged by an unexpected source, Westly noted. China’s rapid growth has created a lot of pollution – a new coal plant pops up once a week, and China expects to result in 82 million lung-related deaths over the next 25 years. “Five hundred million have been lifted out of poverty into the middle class in two decades. And they’re all consuming,” Westly said.  But the country is also making some strong steps to green its economy: raising auto emissions requirements to 42 miles per gallon (and requiring automakers to comply quickly); planting 150,000 square miles of trees; pledging 20 percent renewable energy by 2020; and creating a 50 percent feed-in tariff for wind power. China could soon become the center for innovation, rather than manufacturing. “I don’t want that to happen. It reverses our entire history,” Westly said. Though if it does, Westly noted, “The Roman empire had 500 years. The British had 400. We’ve had a good run here, from 1880 to about 2025.”

Discussion: How Do We Start a Long-Run Green Boom?

At a CVS recently, Lisa Margonelli began to wonder if green has gone too far.

In addition to its acceptably green reusable bags, she said, the drugstore was handing out green paper leaves that promised a dollar of “green savings.” 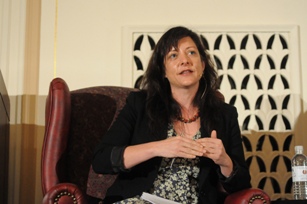 “They had no bearing on anything green. It was a cardboard leaf,” Margonelli, author of Oil on the Brain: Adventures from the Pump to the Pipeline

and a fellow at the New America Foundation, said, wondering whether the concept has become “so fashionable that it is truly devalued.”

Green jobs grew by five percent while regular jobs fell by one percent over 2007 and 2008. Green jobs include those involved in producing and providing products and services that will green the economy – by conserving energy and reducing waste, for instance – explained Grose, who has created a database of green firms.

But the state’s greening has some hurdles to overcome. The concept of “green” isn’t always clear, and is too often considered “fancy stuff for fancy people,” Margonelli said, like Priuses and bamboo flooring. Candidates for governor aren’t entirely supportive of California’s renewable energy goals because they claim it will hurt the economy – Meg Whitman proposes a one-year moratorium on 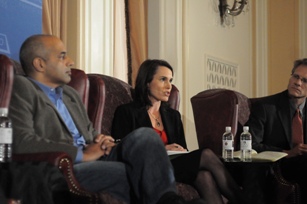 AB32, and Steve Poizner is more strongly against it. A ballot initiative proposes freezing the law until unemployment comes down to 5.5 percent. “The scary thing is it’s not too hard to get a ballot initiative passed here, if you get people confused enough and upset enough,” Margonelli said.

The economy also makes thinking in the long-run more difficult than usual.  “We think in terms of little booms – a biotech boom here, a green energy boom in Emeryville,” Margonelli said. Instead, we should think several decades ahead and consider how to address the state’s problems – from global warming to budget, mortgage, aging, and healthcare crises – in a sustainable way. Grose added that better energy and efficiency standards will open new markets for new products. Individual businesses and local governments can start the process. “As a business, the dollars you don’t spend on your energy bill, you can invest in new capital or in hiring new people,” Grose said.

One local government that is beginning the greening process is Fresno, which Margonelli described as “California on steroids.” The city’s population has grown eightfold, and its area twelvefold, since World War II. Residents use twice as much water per capita as Los Angeles. Air pollution is bad enough that one in three children has asthma. The recession and mortgage crisis hit especially hard in an area plagued for decades with high unemployment and low median income, Oldham said. The city is the largest in the central valley and has a huge baby boomer population now passing into retirement. On the city’s zoning rules, Oldham said, “all they really do is promote sprawl.” 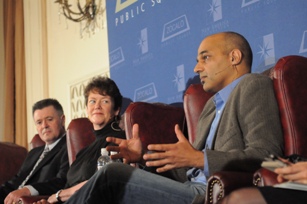 Fortunately, the city’s green plan is “not soft and squishy,” Margonelli said. Oldham said it began with a goal to reduce energy use in built environments 30 percent by 2020. For a city spending $750 million a year on electricity and natural gas, that came out to $225 million “that would circulate in our economy if it wasn’t spent on energy,” Oldham said. The city began conducting energy surveys and going into homes doing simple energy fixes – adding or repairing insulation, installing solar panels. “These upgrades will get a 30 to 40 percent improvement” in energy use, Oldham said, though the city needs much investment to get there, particularly with its tax base beginning to retire.

Kaiser Permanente provides another example of down-to-earth greening. The healthcare company, which serves 8.5 million patients and had 167,000 employees, began its efforts over 10 years ago. Much of its work focuses on around the pollution caused by medical products, Gerwig said: the number one cause of pollution from dioxin, a carcinogen, is medical waste incinerators. Kaiser launched a program to phase out products that use the harmful plastic PVC, used in everything from IV bags to carpets. Kaiser also focused on using safer chemicals, offering sustainable food in its healthcare facilities, and taking action on climate change. The program has been good for the bottom line. “That whole myth about green costing more? We can blow that myth away,” Gerwig said. Particular products, for instance, may cost more per-unit, like a mercury-based blood pressure readers, but have hidden costs – the potential for spills requires training, spill kits, hazard waste clean-up. Switching out 14 products – including the blood pressure readers and lighting in operating rooms – for more energy-efficient products saves Kaiser $14 million every year.

As cities and businesses green, Margonelli cautioned, a smart over-arching strategy can prevent some worst-case scenarios that have arisen in the past, particularly with green chemistry. Replacing existing chemicals with green ones can create health risks, Wilson said. In one instance, an automechanic suffered advanced neurological damage – losing sense and motor function in his limbs – after being exposed to hexane, a chemical used to clean breaks and engines. Hexane replaced a carcinogenic chemical previously used in the auto industry. The 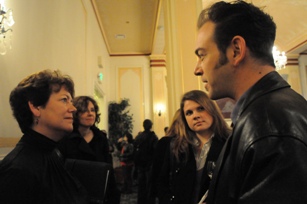 California Environmental Protection Agency did “a great thing” to prohibit its use, Wilson said, but they didn’t have a sense of what would come next. In another instance, building workers in Oregon were putting insulation in large commercial buildings to improve energy efficiency. But the product they had been using in those confined crawl spaces could cause sterility – something the workers only discovered after they Googled the material. In the U.S., Wilson noted, manufacturers of chemicals aren’t required to disclose the toxic properties of their products, which go into consumer and commercial goods and industrial processes.

And there are broader challenges for greening, explained Paul, whose Gigaton Throwdown aims to get investors thinking about how to reduce carbon emissions by one billion tons per year. Regulations don’t always work well – a heavily subsidized wind turbine market collapsed when California killed the subsidies, for example, bankrupting all but one turbine company. That makes investors hesitant, he said. California’s education system, thus far its biggest asset to greening, is now suffering. And finally, Paul noted that venture capitalists aren’t particularly interested in job creation, much less green jobs. “Venture funds don’t care,” he said. “Most people don’t care about green jobs. They might care about a job that generates some green.”

See more photos of the conference and reception here. 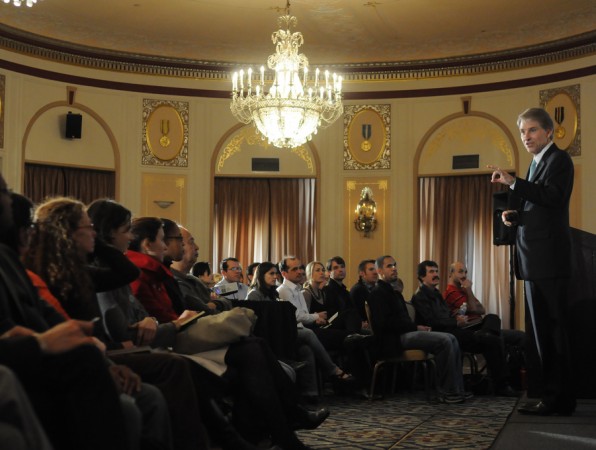