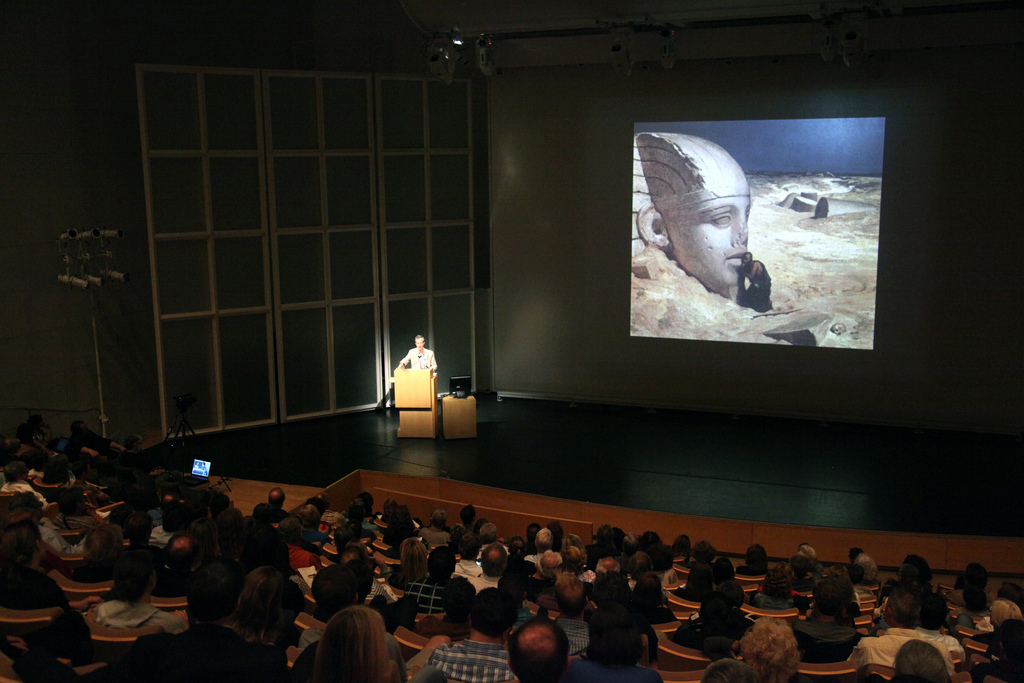 Taking the stage at the auditorium at the Getty Center, Geoff Dyer joked, “I feel I should be playing the piano or something like that.”

But the author of The Ongoing Moment and, most recently, Jeff in Venice, Death in Varanasi, spoke on art and the experience of art through one particular work. And, he insisted, “It’s important that you don’t know what this talk is going to be about.” 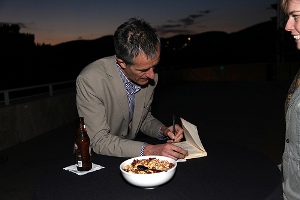 Dyer began by recalling two landscapes from his youth. The first was at a park adjacent to his primary and junior high schools, which was called “the hump,” an area of “compacted dirt with trees growing out of it.” It was either all that had been left of the land that was flattened to create the park, or a place where some of the remains from that building process had been buried. Dyer described the hump as the first place that had “special significance” for him. “It was the fortress to be stormed,” he said. “All games back then were war games.”

The second spot was a patch of wilderness where Dyer would go with friends, and without parents, that was bordered by a sign that said “Beware of adders,” emphasizing, he said, “that you had left the safety of the town behind.” Here there were pillars of sandstone rock with the “locally mythic name,” “Devil’s Chimney,” either natural, or manmade, leftover from a long-ago quarry. Dyer had a photograph of his uncle atop the rock, dating from 1958. It was, he said, “A landmark, a place of mysterious origins where something remarkable and risky had been achieved.”

He described a brief history of how landmarks are made: how stones are laid, and some miracle, perhaps a conception, occurs there. Everyone travels there in hopes of curing his or her own sterility. A disaster – drought, disuse – leads to an attempt to resurrect the landmark with a sacrifice. “The previously nice place acquires an atrocious dimension that far from canceling out its sacred status, enhances it,” Dyer said. Then, after “an invasion or two,” it falls into ruin, and “its primal circuitry is revealed and laid bare. Even when there are just a few stones left,” Dyer said, “the place retains what D.H. Lawrence called, ‘a kind of nodality.’”

Dyer’s reflections on landmarks caused him to recall a work of art he came across when he was unable to find Gauguin’s “Where Do We Come From? What Are We? Where Are We Going?” in Boston’s Museum of Fine Arts. Instead he came across “The Questioner of the Sphinx”, by Elihu Vedder, dated 1863. It depicts a “dark-skinned wanderer or traveler” with his ear pressed against the head of a sphinx “that emerges from the sea of sand in which it has been submerged for centuries.” It seemed to Dyer an early depiction of a post-apocalyptic world – with a black sky that doesn’t seem like a night sky, and in which the head of the sphinx could easily be “the torch of the Statue of Liberty, ‘Planet of the Apes’-style.”

This painting, he said, was “emblematic of the experience I’ll be addressing in this lecture – what a way of marking a landscape means, what it is trying to tell us, and what we go to it for.” 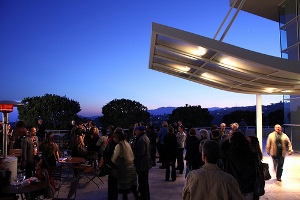 Dyer came years later to what initially seemed like a cabin and a windmill with “sticks stuck randomly in the ground.” Walking toward the sticks, he realized there were many more of them than he realized. “Being invisible was part of their function,” he said. The sticks revealed themselves to be poles of polished steel, three times Dyer’s height, “sharply pointed as javelins,” cold to the touch, and moving in the wind as if they were shivering. “Hundreds of years from now, they would still gleam like the promise of the future,” Dyer said. He walked until he was surrounded by poles, feeling hemmed in, as if by a forest. Everyone in his party had the urge to separate, “so the urge to be separate was shared and communal.”

The cabin in which they stayed, adjacent to the poles, seemed as if taken from a Walker Evans photograph. “What had seemed noble but squalid then seemed idyllic now,” Dyer said. “Anyone would have wanted to be here.” At sunset, the poles grew shadows and their tips sparkled. They acquired bulk and solidity and seemed far more visible. “Absence had given way to presence.” Back in the cabin, they watched the flames of the stove “as if it were a TV or the first-ever fire.” Outside again, the poles were invisible, the sky “a dome of stars.” When the sun rose again, everything was clearer.

The poles had a design, but unlike places like Stonehenge, they had no solstice in mind. “The placement of poles referred to nothing other than itself,” Dyer said. There were 400 poles, a not random number, covering a square area, each 250 feet apart, each equal height, but different lengths to account for the uneven surface of the land. “We wondered if this place was a tribute to the God of Measuring,” Dyer said.

The landmark Dyer described was Walter De Maria’s The Lightning Field, among the great Land Art projects of the 1960s and 1970s. “Everything about The Lightning Field suggests it will be there for years to come, possibly when there are no people left to see it,” Dyer said. “How intelligent, how human would an alien have to be to work out what was going on here?” Dyer asked. 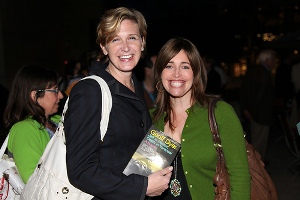 As for seeing lightning at The Lightning Field, Dyer warned, it is “naïve, even vulgar, to expect lightning.” De Maria chose the spot for its high incidence of lightning storms, and titled it as such in “a sensational bit of marketing.” It is an experience much like a narrative, one reason why it’s “almost unphotographable.” Visitors to the spot have highly controlled access – they must reserve well in advance, and they must stay the night in one of the cabin’s six spots. But unlike most art, it permits “freedom of behavior and response.”

“You can drop acid, you can run around naked, you can drink a ton of beer and watch your girlfriend pole dance,” Dyer said.

Some art critics, Dyer noted, haven’t been positive about the work. As one put it, “One will fully expect to see God at ‘The Lightning Field’. Needless to say, he doesn’t appear.” But Dyer disagreed: “‘The Lightning Field’ transcends its exalted reputation. Of course God does not appear. But even as a figure of speech, there’s no room for God.”

Instead, Dyer said, “‘The Lightning Field’ takes the faith and vaulting promise of modernism into the wilderness – as if that were its manifest destiny.” 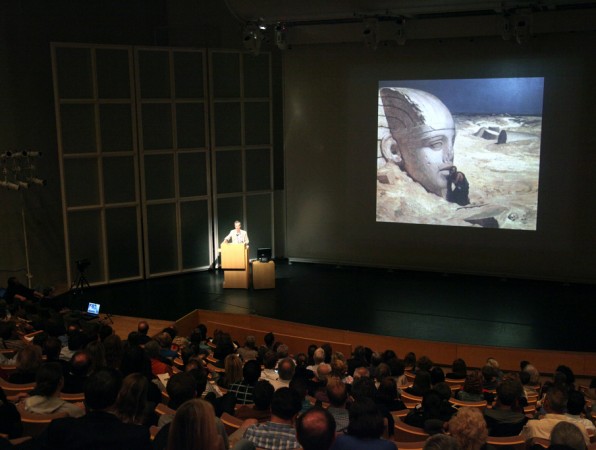