The Muslim Brotherhood: The Organization and Policies of a Global Islamist Movement 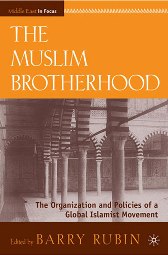 Barry Rubin is prolific. He is the author of 25 books and editor of 30 more on the Middle East, and he edits the Middle East Review of International Affairs. Rubin demonstrates a sense of urgency in his desire to educate, which might explain the varied tone of the collection he’s edited. He introduces The Muslim Brotherhood this way: “The Muslim Brotherhood is by far the most successful Islamist group in the world: a point often overlooked by those studying such matters.”

The movement began in the 1920s in Egypt, with the original purpose of elevating the role of Islam. Today, thanks in part to its members migrating around the world, it’s a loose global network of political opposition parties, social groups and scholarly institutes. The essayists, mostly scholars, vacillate between taking an even, careful tone and proscribing the decades-old group’s existence outside Egypt.

But they also take the more crucial step of explaining what this movement is not. The Brotherhood is not a top-down, tight network – a very important difference from the jihadist groups that dominate American news. While Muslim Brotherhood-affiliates are all influenced by major ideologues, they “operate in silos,” independently responding to local conditions and often engaging in existing institutions with the hope of influencing them from the inside. They focus on local issues – participating in elections and slating candidates in Jordan and Egypt – while jihadists such as al-Qa’ida focus on their obsessions with the West. While not opposed to violence, they do not see the use of force as a particularly effective way to reach their goals, with a few exceptions. One Brotherhood member who serves as an Egyptian parliamentarian said that he supports the activities of jihadist groups, but calls those who kill other Muslims murderers.

Barry introduces the collection with a salient cultural question – is the Muslim Brotherhood a “revolutionary or reformist organization?” – which the essays answer from a variety of perspectives. Scholars in Egypt give a short biography of Yusuf al-Qaradawi, the Brotherhood’s most influential guide, and summarize the groups’ beginnings in Egypt. Spanish diplomat José Escobar Stemman explains the movement’s presence in Jordan, where its goals include free and fair elections and an independent judiciary: “Moderate Islamist thinking is evolving slowly toward pluralism, not liberalism,” he writes, “and the Muslim Brotherhood is no exception.” In Syria, the Brotherhood, like other opposition groups there, has a fragmented and embattled position. The chapter on Hamas and Palestine reiterates that organizations operate independently; while Hamas is an outgrowth of the Muslim Brotherhood, it certainly does not represent the intentions of the Brotherhood in other countries.

In its treatment of Europe, The Muslim Brotherhood complicates the organization further. While Ian Johnson’s fascinating history, A Mosque in Munich, explains the genesis of the Brotherhood’s presence on the continent, scholar Lorenzo Vidino’s well-crafted essay does much to explain what the consequences of their presence are today. He addresses the “terminological controversy” – most links to the Brotherhood in Europe are informal and hard to identify – and makes explicit the fundamental discomfort many people have with the Brotherhood today. The “New European Brothers” have claimed that they seek ways for the Muslim faith and European nations to coexist, but critics call their goals a “Trojan horse” that mask their more radical goals.

The last essay of the collection deals with North America. By far the weakest and most explicitly partisan, it abandons Vidino’s intellectual tone and lists Muslim Brotherhood “front groups” without sufficient discussion of what it actually means to be affiliated with the Muslim Brotherhood. It depends on unsubstantiated charges and allegations and is ultimately an alarmist account of the Brotherhood’s North American activity. While some of the essays in this volume lack consistent vocabulary and would be best approached with a grain of skepticism, the final one departs greatly from the collection’s laudable goal of seeing the Brotherhood for what it is, and for what it isn’t.

Excerpt: “Even when the Brotherhoods influence the movement in other places, these contacts are bilateral. For example, Hamas in the Gaza Strip is related to the Egyptian Brotherhood, while Hamas in the West Bank has its links the Jordanian Brotherhood. Furthermore, to make matters even more complex, the external leadership of Hamas is located in Damascus, where the Syrian Brotherhood is outlawed, and its patron is the regime that persecutes the Brotherhood. At times, in discussing the Hamas victory, Egyptian Muslim Brotherhood sources have said that the ‘Muslim Brotherhood’ won the Palestinian elections. Yet, again, these are parallel and fraternal movements, not truly branches of a transnational organization.”

Further Reading: A Mosque in Munich by Ian Johnson and Why the French Don’t Like Headscarves by John R. Bowen.

*Photo of the Mosque of Ahmad Ibn ??l?n in Cairo courtesy Ahmed Al.Badawy.