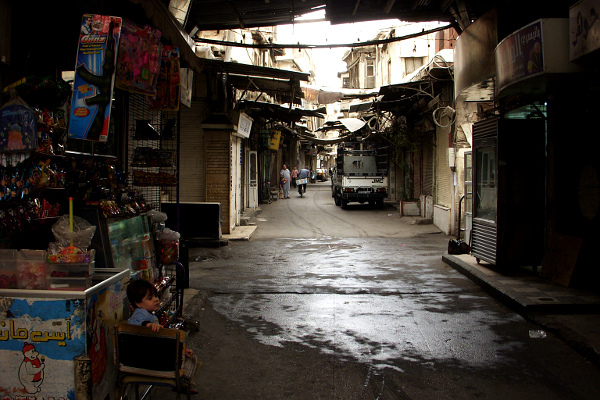 It’s so very tempting to embrace the idea that this could be the Middle East’s 1989 – and by that I mean the 1989 experienced in Eastern Europe, not Beijing. Tunisia begets Egypt; Egypt begets…

Tempting, but not quite convincing. The Middle East dominoes are all so different, as if plucked from separate sets. Mubarak’s Egypt is a squishy sort of authoritarianism, an ethnically cohesive nation at peace with its neighbors and host to civil society activism that would have long been extinguished in the less nuanced dictatorships of the region.

And yet, a friend pushes back, couldn’t you have said the same in 1989, about the differences between those dominoes lined up behind the Iron Curtain? Hungary’s brand of totalitarianism was far squishier than Romania’s – and yet the wave of history overlooked these national distinctions. And so the debate rages, along with a concern that we all may be obsessing over the last domino tumble.

Could Damascus be next? Or perhaps next after whatever other domino may be next?

I lived in Syria for almost three years – which is to say I cannot be too optimistic.

Seeking reasons for hope, I’ve reconnected over the past few days with some of my Syrian friends and contacts. Like many educated young people in the Arab world, my friends have watched the massive anti-government protests in Tunisia and Egypt with mounting excitement and emotion.

These cosmopolitan young Syrians yearn to see change in their authoritarian, Ba’athist government, led by Bashar al-Assad, the mild-mannered opthalmologist who inherited his secular kingdom from his father, the prototype of canny Middle East strongmen. But on what was supposed to be Syria’s own “day of rage” last week, my friends all stayed home – and instead watched the news from Cairo’s Tahrir Square broadcast on Al Jazeera.

Despite the fact that more than 16,000 people joined the “Syrian Revolution 2011” group on Facebook, one of the largest of several pages that have been set up recently to organize Syrian demonstrators, the planned protests in Damascus last week were a failure, by any measure. On February 2, a group of fifteen protesters holding a candlelight vigil in Bab Touma square, just outside Damascus’s old walled city, were attacked by plainclothes thugs, according to Human Rights Watch.

Two days later, on February 4, despite well-publicized calls for demonstrators to mass in front of Syria’s parliament building after Friday prayers, the streets remained empty.

“I am so proud of what is going on in Egypt and what happened in Tunisia,” my friend Intisar wrote, in a Facebook message. Syrians, she told me, are praying that Egypt’s anti-government protesters will be successful in their efforts to force President Mubarak to step down immediately. Young Syrians are feeling the events in Egypt as sharply, she said, as if they were happening in Syria itself.

Egypt’s cultural sway in the region is such that for a time under Gamal Abdel Nasser, Syria joined Egypt to form the United Arab Republic in a short-lived ode to pan-Arabism.

But the two nations are quite different these days. As Joshua Landis, a Syria specialist who directs the Center for Middle East Studies at the University of Oklahoma, put it in a recent phone conversation: “Syria doesn’t have freedom, and it doesn’t have money, but that’s where the similarities end.”

Syrians are, generally speaking, far more fearful of their government than their Egyptian counterparts, and they have reason to be: they still live under an emergency law, enacted in 1963 and justified by
Syria’s ongoing state of war with Israel, that suspends their constitutional rights. The Muslim Brotherhood, illegal but essentially tolerated in Egypt, has in Syria been effectively hounded out of existence. In Syria, membership in the brotherhood has, since 1980, been a capital offense.

I still remember how astonished I was when, visiting Egypt for the first time in the spring of 2005, I was taken to a meeting of Kefaya, a loose coalition of political groups opposing Hosni Mubarak’s presidency. The meeting, held in a large hall in the journalist’s union building in central Cairo, had attracted hundreds from across the political spectrum. I’d been living in Syria for nearly a year at that point, and I was already habituated enough to Syrian norms to be awestruck at the sight of these Egyptian activists, arguing and networking with one another in the lobby, swapping business cards and handing out pamphlets. Such a meeting would have been literally unimaginable in Syria, where all dissent is ruthlessly, and immediately, crushed.

Syrians who do try to organize opposition to their government are not only crushed, but they also tend to be branded as traitors. Every Syrian schoolchild knows Nasser’s phrase, “No voice louder than the cry of battle.” When Suheir Atassi, one of the organizers of the February 2 demonstration, went to the police to complain about her treatment, the Human Rights Watch report states, she was slapped and accused of being an enemy agent.

The form of Baathism practiced in Syria may be less brutal than that practiced in Iraq under Saddam Hussein, yet the sense of fear that pervades all political conversation in Syria is difficult to overstate. The Mukhabharat – Syria’s infamous secret police – are a constant presence in cafes and hotel lobbies. By the time I was nearing the end of my second year in Syria, several of the Syrian activists who had been so helpful and interesting when I first arrived had been arrested, and I had begun to feel continually anxious that some small carelessness on my part could somehow get someone I had interviewed into trouble.

Syria’s leadership has been able to maintain this choke-hold on its people in part, because Syrians also fear their own diversity. While close to 90% of Egyptians are Sunnis, Syria has large Christian, Shia, Alawite and Kurdish populations. These ethnic minorities fear what could replace Bashar al-Assad’s government and, after the arrival of an estimated 1.3 million Iraqi refugees in Syria, they know all too well the kind of chaos these divisions can give rise to.

So Syria’s leadership has some advantages Mubrarak’s regime wasn’t able to count on – a more fragmented population, a more broken (literally) opposition and a state of perpetual, almost Orwellian, existentialist war. This last point helps Damascus stir up the nationalist pot, something Mubarak can’t do as convincingly given widespread perceptions within Egypt that he serves at the pleasure of the American empire. Indeed, one common trait linking the fallen class of 1989 in East Europe was the taint that they were foreign (in that case Soviet) clients.

So Syrians have been watching Egypt carefully, seeking solace or inspiration in weighing the strength of historical trends against the strength of national distinctions. As if to hedge, al-Assad himself told The Wall Street Journal recently that he is going to champion reforms.

He has some room to maneuver. “The Syrian opposition is mostly locked up, the leadership is cut off, and it’s very hard for them to communicate,” said Andrew Tabler, author of the forthcoming In the Lion’s Den: Inside America’s Cold War with Assad’s Syria. But even lacking opposition leaders, the Syrian people may one day soon become a force to reckon with.

“Ordinary Syrians are fed up with this environment where corruption is going through the ceiling and people are getting poorer,” Tabler said.

The regime in Damascus can derive much comfort from the stark differences between Syria and Egypt, but should probably resist complacency. Bashar al-Assad’s sleep should be haunted by that one cautionary tale: Romania.

Katherine Zoepf writes frequently for The New York Times and is working on a book about young women in the Arab world. She is a Schwartz fellow at the New America Foundation.

*Photo of the streets of Damascus courtesy of hern42.