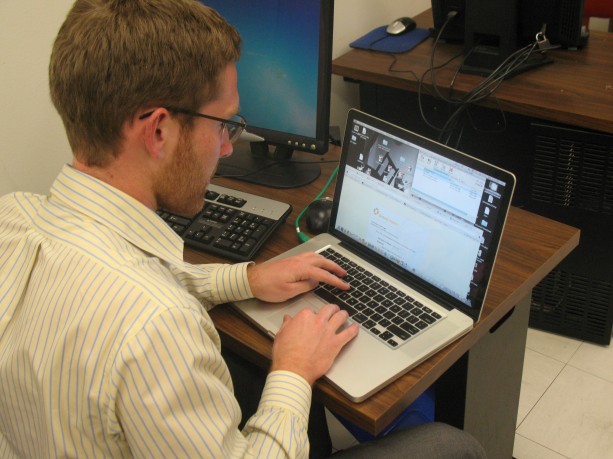 John Scott-Railton is a doctoral student at UCLA’s School of Public Affairs-where he spends virtually all of his spare time running a Twitter page dedicated to airing voices from the protests that broke out across Egypt on January 25th. Using a Blackberry and his laptop microphone, Railton has been relaying text, audio, and video messages from Egyptians on the ground to audiences both at home and abroad. Zócalo caught up with Railton between tweets to chat about the role of social media in the Egyptian uprisings, his own involvement from his Westwood office, and how media technology can both amplify and distort voices from half a world away.

Q. Your specialty is urban planning. Why do you have a relationship with Egypt?

A. I first went to Egypt in 2006, and it was somewhat of an accident. I had some friends in the Middle East who I wanted to see and we decided to pick a spot that all three of us could converge on. We chose Cairo. And I ended up building friendships there, ties that bind.

Q. How have you been in contact with people in Egypt during the protests?

A. During the first seventeen hours, I started reaching out to my Egyptian contacts on their cell phones. But I learned from them that the cell phone networks were going to go down. So I quickly collected landline numbers. Then cell phones came back, but the Internet was still down. As you can imagine, it’s very difficult to follow a protest with a landline, because if people are out protesting they aren’t near their landlines. So you wind up talking to their aunts.

Q. Who (apart from aunts) have you been talking to?

A. I try to make sure that the people I speak with are within one degree of separation or trust. I don’t want any “virtual” Egyptians, and I don’t want anybody where I don’t know what they’re about. Over time, those networks kept expanding. I was also able to get third parties who I knew or who had some kind of public persona, like an office with a listed telephone number, to act as references and vouch for people on the ground. It’s a pretty diverse cross-section of society.

Q. Is your work aimed more at Western media outlets or more at people on the ground trying to communicate with one another?

A. I think it’s definitely about the outside world. Twitter originally had both a tactical and an informational role: helping protesters figure out where to go and generating a rich transcript so people like me could observe what was happening. When Twitter went down, I thought: I wonder if I can help preserve its informational role, if I can preserve the voices that the Egyptian government is trying to silence-let’s see if we can un-silence.

Q. Was this an abrupt decision, or did it happen incrementally?

A. On the night I started doing this, it was 8:00 PM and I was so ready to leave my office that my bags were already outside my door. And the idea just hit me: I wonder if getting in touch with people in Egypt is actually feasible. So I reached out to friends in Egypt and also in the US: expatriates like Yosra Gamal Sultan (a PhD Student at NYU) and later Ramy Yaacoub (a PhD student at American University) who have collaborated with me and are doing very similar things. It just seemed this had to be done, so I threw myself into it.

It’s a totally ad hoc effort on my part, and a totally imperfect effort. In terms of my ability to check facts, I am still limited, compared to what journalists can do. I used to have a rule that I would only tweet something if I got a second confirmation, but that’s awfully hard to do. I simply happened to have fallen into this position, so it’s not really about the work that I’m doing, but instead a testament to the power of a people talking about the change they’re making to their society.

A. My contacts have ranged from the children of high-level NDP [National Democratic Party] officials, to poorer students from poorer neighborhoods. And the protests themselves have happened all over the place, from small towns to rural hamlets where there simply are no journalists. Tahrir has become the place that people think about a lot, but it doesn’t capture everyone frustrated with the Egyptian government.

There is also a risk in talking too much about the youth. There is this whole family network of parents and aunts and cousins and so on who are all feeling the same way, and who in the past week have also shown it by protesting.

Q. Did the protest movement take either you or the Egyptian people by surprise?

A. I think it took everyone by surprise. Protests in Egypt before now were small, and the riot police would cordon around them, four, five, six deep. There has always been a narrative about the “tensions” in Egypt that are one day going to break free, but most people acted as if this wasn’t actually going to happen.

Q. Would you say that social media were real catalysts in getting protesters onto the street and allowing them to sustain their protests?

A. Well, it did start with a Facebook group, right? There was a Facebook group about a person, Khaled Said, who was brutally assaulted and later died in an Internet café. Still, on the biggest days of the protests there were no social media, there was no Internet. The core point I’d like to make is that you want to be very careful about overestimating the role of social media. They do create a space where many interesting conversations happen, but a lot of Egyptians would also emphasize the non-electronic networks that they have. Social media may have played a catalytic role, but they didn’t sustain the movement; it’s not a “Twitter Revolution.”

Q. There has been some discussion about the potential negative effects of social media on protest and resistance movements. Is there anything that you have observed that would lend credence to that worry?

A. It’s hard for me to imagine what a medium would look like that doesn’t have a risk.

Q. Louis Klarevas at New York University’s Center for Global Affairs has listed four effects that social media have had. They have allowed protesters to 1) gain knowledge of the outside world 2) coordinate their protests 3) express their dissent and 4) build a sense of solidarity and hope. Sound right?

A. The people who were involved with the protests in the early stages were often middle class or well-to-do. They had plenty of knowledge of the outside from brothers and sisters who had studied in the United States, or from studying themselves at the American University of Cairo. Their sense of solidarity was obviously strong enough that when social media disappeared, their solidarity did not. If it were the case that social media had really supplied all of these things, you would imagine that during the period after social media were cut off people would be wondering what on earth to do. But they weren’t. They switched very quickly to landlines and other tools. In fact, for a lot of the young Egyptians, as important as all these things were coffee shops.

Q. What are you doing right now, and what are your goals for the project in the near future?

A. At the beginning, when communications were really a problem, I was doing an ad hoc information feed. What I’ve been trying to do more recently, in conjunction with a lot of friends doing similar things, is work to create a website that will have a rich variety of curated content coming out of the dialogues that are happening right now in Tahrir, on Facebook, and verbally-a stable place where major positions and arguments can be presented and understood.

I’m also exploring using these broad networks that I’ve established to do things like translation. For example, I’ve got an amazing video clip made by an Egyptian pop singer who had recorded a song about youth anger well before the protests began. But the video uses imagery from the outbreak of the uprising on January 25th. I’m collaborating with fellow translators to subtitle it. We’ve done the same thing for an interview with Wael Ghonim the Google executive who traveled to Cairo and was held by police for twelve days. So I’m trying to move away from figuring out what’s happening in the next fifty seconds to having a much more careful conversation.

Q: What have been some of the most common sentiments expressed in your conversations?

A. There is real debate among Egyptians about what the pace of transformation should be. Opinions have been evolving daily. Initially, people were astonished at the government’s willingness to resort to thuggery. They thought, hey, we’ve come in peace, we don’t want to seem like we’re ripping our country apart. Now, I got the sense that a group of Egyptians felt sympathetic to Mubarak after his speech. But I think the continued violence and thuggery really prevented that message from sticking. So you have a pro-reform movement that sometimes gets portrayed as merely an anti-Mubarak movement, and it’s a lot more complex than that.

Q. Have you encountered any significant anti American sentiment?

A. Right now, people in Tahrir have a fairly straightforward criticism: We can’t figure out what the US is telling us about how they feel about what we are doing! I think that a lot of people accordingly sense some hypocrisy on the part of American policy. You also have a number of young people who have a broader criticism of capitalism and think that this would be an interesting time to engage that. And of course you have people who criticize the US for its support of Saudi Arabia, the wars in Iraq and Afghanistan, et cetera. So there are a lot of different frustrations, but in fact the vast majority of anti-Americanism is not coming from the protesters. It comes out of state media, who like to say that foreigners are causing all the unrest. You even have fake television shows where a caller phones in, crying, saying “I’m a real Egyptian in Tahrir and there are all of these foreigners, speaking English.” They’re playing stuff like this all the time.

Q. I noticed that this television show is posted on Facebook and has a number of comments. Do the commenters find it as phony and humorous as you did, or do some of them take it at face value?

A. That’s a great question. People find it humorous. But it’s also quite scary. That’s why we translated it, and now you can watch it online. I hope that people will.

Colin Kielty is a researcher at Zócalo Public Square.