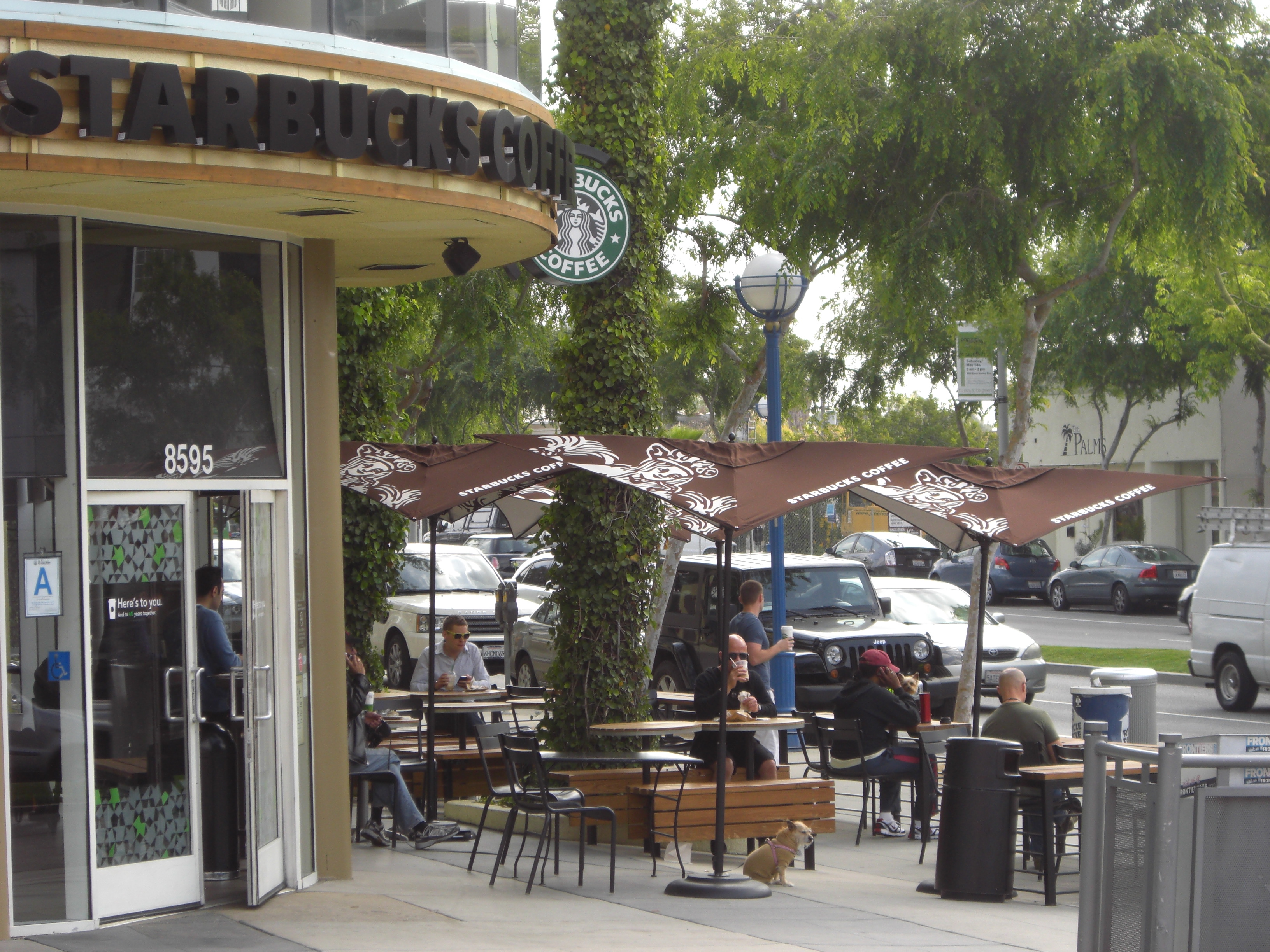 Every city has a gay epicenter: Market and 18th in San Francisco, Halsted and Roscoe in Chicago. In Akron, Ohio, where I grew up, it was probably near the rack of parachute pants in the Chess King store at Belden Village Mall.

In Los Angeles, at least at 9 o’clock on weekend mornings, it’s the Starbucks at Santa Monica and Westmount Drive. I’ve been going here at least two days a week since around 1998. The baristas know me by my order. “Short drip?” they chirp before I approach the counter. Short coffee, I want to correct them.

You could say all Starbucks are the same: the same smell of burnt beans, ostentatious drinks whose names require practicing, racks of mugs nobody buys, Norah Jones. But more than 90 percent of the customers at my Starbucks are gay – more regular-guy-and-his-dog gay than six-pack abs gay – and they’ve made it into a genuine social center, even more so than a bar. I’m among that 90 percent, but I don’t socialize there. For me, it’s a place for cheap(ish) adequate coffee and bland music that won’t distract me from The New York Times, inviting but not comfortable enough to stay longer than it takes to read the Arts section and the editorials. If I time it right, I can score an already-read Times from the discard bin at the front door.

I could brew my own coffee, but making a whole pot is wasteful. I prefer to get out of the house first thing, and Starbucks is the perfect distance for a morning walk. The Coffee Bean is several more blocks away, with only five tables, louder music, and no Times. The smaller Starbucks next to the Coffee Bean has even less seating, so there’s no point. I could drive to an independent coffeehouse, but I hate driving, and indies are too homey. They almost shout, “What’s your rush? Play Scrabble.” And call me crazy, but I like being known by my drink order rather than “Larry.” Maybe I’ve lived in a big city too long.

They remodeled the gay Starbucks last year and they doubled the seating area. But as with freeways that become clogged a week after they’re widened, almost every seat is usually occupied. There’s a communal bench where you’re almost forced to chat up whoever is across from you. I don’t have the time to do that. Like I said, I’m there for coffee and the Times.

The place has shifting moods. Afternoons mean writing partners enthusiastically hammering out story lines (“The hooker is also a hedge fund manager!”). Evenings bring awkward first dates with guys who met online with high hopes. Late evenings are filled with the more somber whisper clicking of scripts being created on laptops (FADE IN: A stiletto-heeled hooker, with the steely resolve of a hedge fund manager). I rarely visit during those times.

On weekend mornings, though, everyone seems to know each other and is interested in getting to know everyone else. Even the occasional family who’s just checked out of the pink Ramada next door, carrying suitcases and scolding their children in German accents, will chat up a group of guys.

The place has been, for me, the perfect place to be among people, yet anonymous. But lately I’ve begun feeling like a short drip hermit.

I blame my mother. Twice in the last month she has told me how she can’t wait to come back to visit Los Angeles so she can go to “that nice Starbucks” and meet some more of those “nice gay men.” I assume she is willing to spend upwards of $450 on a plane ticket to see me as well, but she hasn’t said that in so many words. With every visit she eschews the usual tourist attractions. For her, the gay Starbucks is Los Angeles, and she acts like it’s her own AARP cotillion. In 20 minutes she will talk to more people there than I have since the Clinton presidency–this from a woman who usually views strangers with fear and a little loathing and carries her purse in a plastic CVS bag to deter muggers.

“You could be friendlier,” she said after the last time I took her there. I was indoors reading the Times Book Review while she was on the patio discussing dog training with a guy who had two Chihuahuas. It’s not a matter of being friendly, I try to tell her. I socialize, just not there. It’s hard to explain that I actually go to a Starbucks for the coffee.

She has no interest in going to a Starbucks in Akron. The weather is lousy, so no patios. Presumably gay men there brew their own. If she doesn’t make it out here this year, I might just send her a few Norah Jones CDs.