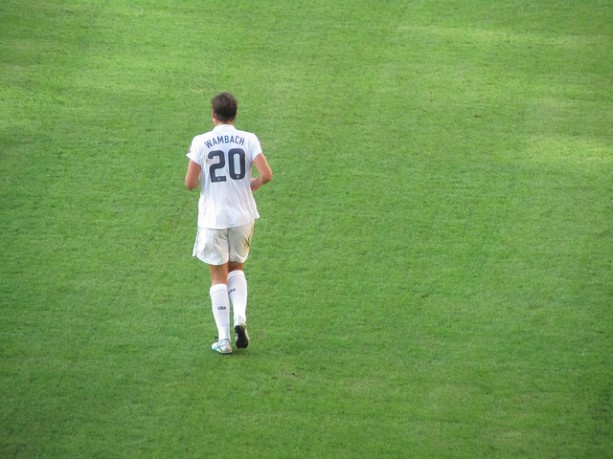 Boston has a reputation – well-deserved – as a sports town whose residents are notorious for organizing their lives around the schedules of the Red Sox, the Celtics, the Patriots, and the Bruins, especially during post-season play. But it was definitely a first for me last week when I heard an older gentleman say to the owner of a local specialty shop that he needed to rush home to watch the women’s soccer match.

At first this seemingly casual remark didn’t sink in, but then I suddenly realized how unusual, indeed revolutionary, it was for a women’s sporting event to command the interest of a broad demographic base, not just soccer-playing girls with ponytails. And capture national attention the women did, with their thrilling victories over Brazil and France before the disappointing loss to Japan in the final. Regardless of the outcome, the World Cup was transcendent and compelling sport, and it transfixed those who tuned in, regardless of gender.

That’s the optimistic spin, though there is an equally valid pessimistic take. The television audience for these World Cup games was respectable, but there is little reason to believe that it can translate into any sustained attention for women’s soccer at the domestic league level. For plenty of team sports, women can capture the nation’s attention for a fleeting moment – think the Olympics or a World Cup – but there is no women’s equivalent to Major League Baseball, the NBA or the NFL in terms of a sustained, mass following.

Why have women’s teams, especially on the professional level, struggled so hard to get even a toehold in the wide world of sports? What does it take for women’s sports to be taken seriously by American fans? Title IX, the federal law that mandates equal opportunity in all aspects of education, including sports, offers some clues and cautionary tales.

Backtrack to 1999, when women’s soccer burst onto the national scene with the U.S. World Cup victory at Pasadena’s Rose Bowl. Many of the outstanding players on that team, and the 1991 team which had won the inaugural Cup, benefitted from the opportunities that Title IX has opened at the high school and college level, especially athletic scholarships. Without those soccer players coming up the Title IX pipeline in the 1980s and 1990s, there would have been no talent pool to create those winning teams. No wonder the press dubbed them “the daughters of Title IX.”

Of course it wasn’t solely their skill that guaranteed success-they also profited from a vacuum in the wider world of soccer. For most of the rest of the world, soccer (or, more accurately, football) at the elite level was the exclusive preserve of men. Only recently have countries started channeling more resources into developing women’s teams, which as a result have gotten much more competitive, as Japan strikingly demonstrated in this year’s final.

Another plus for women’s soccer in this country is that it was not historically the game of choice for American men (unlike in much of the rest of the world), so women didn’t face the inevitable comparisons to established male traditions in the sport. And yet even with the legions of soccer-playing girls, a professional soccer league for women collapsed. Not enough fans, not enough corporate support.

Bad timing might be among the culprits conspiring against women’s sports. Although Title IX did not cause the women’s sports revolution when it passed in 1972, it certainly was a spur. Still, women’s sports in the 1970s were at an embryonic stage. By the time there was a critical mass of world-class female athletes in the 1980s and 1990s, the broader world of sports had changed dramatically.

The 1979 debut of ESPN, which uncovered – or created – a seemingly insatiable demand for sports-related programming, serves as a convenient benchmark. In an increasingly corporate, commercialized world of sports as entertainment, there was big money to be made, especially where television was concerned, and the dominant men’s sports – football, baseball, basketball, and hockey – solidified their market shares. Women’s professional sports struggled to break into an increasingly crowded field, held back by the lateness of their arrival on the sports scene and the difficulty of attracting corporate and financial backing. Alas, no Title IX legislation required that women get an equal shot at making it as professional athletes.

Women’s basketball is a case in point. In the 1970s and 1980s there were abortive attempts to set up professional leagues but frankly the talent and interest just weren’t there. Nothing happened on the professional front until the late 1990s when the NBA-sponsored Women’s National Basketball Association started up in 1997, crowding out the rival American Basketball League which folded in 1998. While the WNBA draws loyal crowds, no one would ever confuse it with the NBA.

There is one dramatic exception to this trend: women’s tennis. Tennis lucked out by having its breakout decade before the world of mainstream sports became so hard to crack. The 1968 decision to allow professional and amateur players to compete in major tournaments like Wimbledon and the U.S. Open ended the old “shamateur” system where players were paid under the table. Then the tennis boom of the 1970s built an enthusiastic – and affluent – fan base that allowed the sport to move far beyond its country club origins.

And women’s tennis lucked out by having a visionary leader like Billie Jean King to battle the tennis establishment to make sure that women were part of tennis’s success story from the beginning. King served as the midwife of women’s professional tennis, her tireless advocacy laying the groundwork for today’s multi-millionaire stars.

Women’s tennis also profited from a steady stream of charismatic female stars – from Chris Evert and Martina Navratilova to Venus and Serena Williams-as well as the fact that Grand Slam tournaments showcase both men’s and women’s draws. Imagine if major golf tournaments were played this way. No other women’s sport has had such a winning combination of factors stacked in its favor.

While there are many reasons to celebrate the revolution in women’s sports that has dramatically leveled the playing field since the 1970s, it is hard to be very optimistic about the chances for women athletes to compete for fan loyalty and corporate support on a par with men’s professional sports. The history of women’s sports confirms again and again that it is much harder to build professional franchises in team, rather than individual, sports. And when sports like basketball and soccer made their bids for the discretionary sports dollar, the train had already left the station.

Still, the recent images of strong, athletic women competing before a national, indeed global, audience will certainly build goodwill towards women’s sports. Great athletes, great competitors – isn’t that what sport is all about? When fans watch a game and don’t think of it as “women’s” soccer or “men’s” tennis, but simply a game well played by an outstanding athlete regardless of gender, now that would be truly revolutionary.

Susan Ware is the author of Game, Set, Match: Billie Jean King and the Revolution in Women’s Sports (2011).