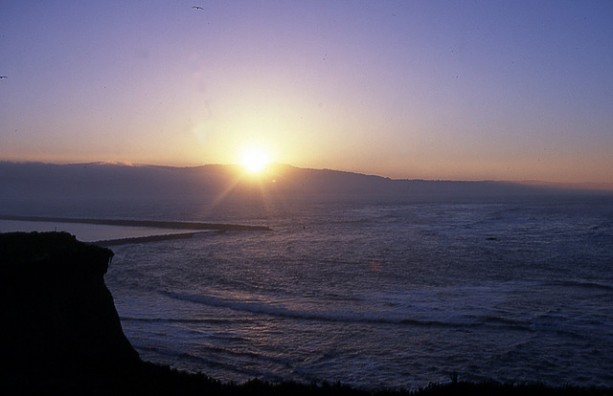 One of the most magical things about the Maverick’s surf point-or perhaps it’s simply the most intriguing-is that you can’t usually see it, not even if you know exactly what you are looking for, which most of us don’t. You stand on the bluff above the water just north of Half Moon Bay in Northern California, and you hunker down in the chilled winter breeze blowing in off the Pacific, and at some point you crane your neck and stare perhaps half a mile out to sea, where it’s all supposed to be happening.

And when some learned observer next to you suddenly says, “There. There,” you peer into the fog or through the low-hanging clouds, spot (or don’t spot) something that looks like activity out there on the waves, and nod approvingly.

“Nice,” you reply, unwilling to admit the truth. The truth? Maverick’s, from the vantage point of the beach, is mostly a rumor.

The wave itself, the unyielding force of nature, is a roaring freight train of a different matter, but we’ll get to that. First, understand that one of the most sacred big-wave surf spots on earth is also one of the least accessible. You’ve got to want Maverick’s.

It is its own reward, the trip out to the bluff. From San Francisco, the point is accessible via a 22-mile regimen of twists and turns along Highway 1, through Pacifica, and down a particularly malicious piece of road around an area known as the Devil’s Slide, past which the pavement suddenly smoothens and broadens out to the finish, a breathtaking stretch in which the ocean thrusts itself into full view, the waves crashing home along the broken shores of the rugged, rock-strewn beaches.

In the geography of surfing, Maverick’s is nowhere. The spot lies well south of San Francisco’s Ocean Beach, home to some of the truly fine surfers of the area, and an hour’s drive north of Santa Cruz, where so many of the hard chargers cut their teeth at Steamer Lane, Cowell’s, and other storied surf points. Barely visible from the highway, and even then only if you know exactly when and where to look, Maverick’s is a classic don’t-blink proposition for most travelers.

In terms of access, the place is more remote yet. To even get to the bluff, a visitor first has to cut through tiny Princeton-by-the-Sea, known simply as Princeton to the locals, whose scattered homes and condos comprise an unincorporated hamlet at the farthest northern reaches of Half Moon Bay. There are a couple of hotels and bed-and-breakfasts, several bars and restaurants, a lighthouse, and the tranquil harbor itself.

A few blocks away, on a thin reed of side street called Harvard Avenue, sits the building that, for years, housed the original Maverick’s Surf Shop, Jeff Clark’s longtime storefront, and featured a rusted-out SUV out front with surfboards mounted on top. Several hundred yards beyond the shop, you abandon your car at the dirt and gravel lot off Pillar Point, and leg out the last half mile to the bluff itself.

Clark, now in his 50s, is widely understood as the godfather to Maverick’s, the person who took the surf point–originally “discovered” in the 1960s and named for the dog of one of the men who surfed it–and introduced it to the world at large. Back in the early days, when Clark was surfing the spot by himself in defiance of just about every law of self-preservation, a spectator could scramble up the side of the bluff and, after walking for a few yards on flat ground, grab hold of the post of an old chicken-wire fence that jutted out almost off the edge of the property. With a good jump you could swing, fireman’s-pole style, to the other side.

If you lost your footing, or your grip, it was about a 60-foot drop onto the slicing beach boulders below. But the reward was spectacular: a fat expanse of land that led to the far edge of the bluff and a sensational, sidelong view of Maverick’s. A few years ago the U.S. Air Force, which owns the land, declared most of it off-limits to the general public, but the small patch that remains is intoxicating and tempting. If you do everything right, you just might see the surf.

There is a tranquility to the bluff that is almost completely at odds with the wave itself. The point known as Maverick’s routinely produces walls of water that break huge, hard and cold, with faces that can reach 50 feet and higher. Surfers are exposed to all manner of ludicrous risk, including crashing on the wave and being plunged, pile-driver style, into the frigid deep. They can be washed into an area of unforgiving jagged rock known to the riders as The Boneyard. Rescues are difficult. The spot has claimed two surfers’ lives, most recently earlier this year, and produced an incalculable number of brutal wipeouts.

But back on land, at the Air Force overhang, so little of that comes into play. The surf beyond, a formation that was at least several hundred thousand years in the making, is an awesome sight that takes on mystical hues through the mist and low fog. The riders themselves look like distant voyagers; they begin the long paddle-out from the beach below the bluff with the enthusiasm and brotherhood of the truly committed. They speak of the wave itself in reverent and sometimes spiritual tones.

When I first began spending time with the tiny handful of surfers willing to take on Maverick’s giant waves, I often found myself hanging out on that bluff, unable to see much of anything and yet reluctant to leave. It’s the kind of place that blows cold on winter days, and since the big-wave surf season occurs between November and March, that’s most of the time.

But it is a brotherhood in its own right; you’ll often find small groups of people clumped together, huddling under blankets in their folding chairs, sharing a drink of something that fights off the chill. Time slides sideways. Nature compels. The place is the thing. And now, a few years after I discovered it for my own self, I find myself rooting for winter to get here, when the clouds and the cold chase off the casual visitors and the core group returns to watch, watch and wait, wait and think. The bluff will be ready when I am.

California author Mark Kreidler‘s book The Voodoo Wave: Inside a Season of Triumph and Tumult at Maverick’s will be released in September by W.W. Norton. Kreidler is an ESPN columnist and co-host of a morning radio program on 95.7 FM in San Francisco.