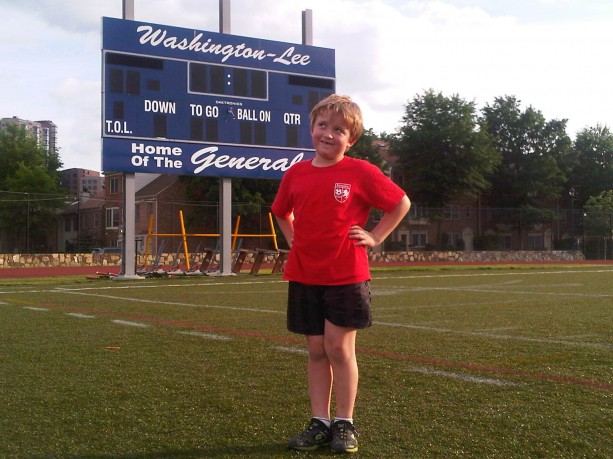 I couldn’t resist. I tried, I really did. I stayed away for more than a year, but in the end I succumbed. I pledged in The Washington Post that I wouldn’t go there, but I am a fallen man. Not only do I go there most weekends now, I usually take my six-year-old son with me. Yes, Sebastian and I are regulars.

You don’t understand. I’d never stepped on turf so soft, or a track so bouncy. When did fake grass become so luxuriantly superior to the real thing? The football field at Washington-Lee High School (home of the Generals) just down the street from me in Arlington, Va., is the softest carpet I have ever walked on. That slick, perfect pitch lures you on with its promise of a precision once unimaginable: no dirt mounds or uneven grass to affect the ball’s trajectory.

Sebastian and I relish our workouts together. We usually play soccer, then throw a football around and run a couple of laps, or up and down the bleachers. We’re in that precious window where Daddy can do no wrong. He “ooohs” and “aaahs” at my mediocre passes as if I were Tom Brady; he accords my rusty dribbling skills the kind of awe owed the likes of Lionel Messi. When we join a pick-up game with other kids and parents, Sebastian will engage in a six-year-old’s trash talk: informing everyone of how good his daddy is. Meanwhile, when we go one-on-one, in any game, I don’t necessarily let him win. I tell him I have to win while I can, because I soon won’t be able to beat him. Seabass loves that.

He craves officialdom in earnest and innocent ways. “This is the same jersey the Barcelona players wear in their games, right daddy?” he’ll ask repeatedly. “Is this the same size ball?” I remember craving that as a kid too. When I was in third grade, those of us on our school team had individual ID cards – laminated! – that we presented to the ref when we came onto the field, certifying that we were legit members of the Chihuahua Fútbol Association. My coach solemnly assured us this was a branch of FIFA, meaning that my mug (at least in my fevered imagination) was archived in some vault in Zurich.

But we certainly didn’t have fields like this in Chihuahua. My school’s soccer pitch was inclined rather steeply, and lacked grass, fake or real. In the spring months when the desert winds would pick up, our dirt field would host veritable sandstorms that turned our soccer games into a sideshow. Back then, no one, not even the most pampered pros on the planet, would have played on turf as sweet as that of the W-L Generals, because it hadn’t been perfected yet in the lab.

I try not to tell Seabass–at least not on each outing–how lucky he is to play on such a field, and about my epic ordeals playing on tilted dirt. I sound ancient and crotchety when I do so, the way grandparents do when they talk about walking miles to their schoolhouse. And my tale of woe, as is often the case with such “woe-was-I” reminiscences, is self-servingly selective–I had a pretty comfortable childhood in Mexico, pitiful sports facilities aside.

Sebastian’s own school these days is called Douglas MacArthur, which is such a relief. At least that general led U.S. troops (even if he didn’t always want to be led by a president), instead of plotting the destruction of the nation. In these parts, that’s progress. I coach his MacArthur kindergarten team. We’re called the Tigers, though in my mind a more apt tribute to the general (and to my kids’ propensity to wander off onto the adjacent playground during practice) would be to call ourselves “the insubordinates.”

I love the serendipity that comes with wandering over to our unfortunately-named public high school for a workout. We never know if we are going to be exercising on the track during an intense match between community teams, or an over-the-hill flag football exhibition, or come across small clusters of players we can join. One day we had the entire field to ourselves. And serendipity comes in all forms on the edge of the empire’s capital–Northern Virginia is an astonishingly diverse sliver of the old Confederacy, home to sizable Middle Eastern, African-American, South Asian, Vietnamese, Salvadoran, West African, Bolivian and plenty of preppy WASP communities, many of whom come to sweat and bond at the home of the Generals.

Seabass and I tend to end our workouts on our backs, lying side by side looking up at the clouds, discerning shapes from the puffy cotton–a fast-moving shark fin here, an overweight rabbit there.

“You know what, Daddy?” Sebastian asks from time to time, a lead-in to conversations that invariably land on the day’s highlights reel.

“When I was little,” he said a few weeks ago, “I used to think that Jesus came before the dinosaurs; isn’t that silly?” He then cracked himself up. “So, I thought Jesus was on the earth, then after he died, dinosaurs wandered around, and then they died and the rest of us humans showed up. That’s crazy, right Daddy?”

Inspiration often strikes in these sky-gazing chats, like our decision in May to celebrate an R2D2 Day, in honor of underappreciated heroes everywhere (“Selfless, not selfish” was the day’s motto).

But my gnawing guilt stalks these precious moments too, often when I catch a glimpse of the Washington-Lee scoreboard. Am I not a co-conspirator in the glorification of the Confederacy, just by being here? I assuage the guilt with fantasies I will never act upon, of going over in the middle of the night and spray-painting over the second name, the one of the general who killed so many American soldiers in the name of slavery. Or of becoming a community oddball who pickets Friday night games, handing out flyers on crisp fall evenings to preppy kids rooting on their Generals. But alas, back in the real world, a detached (or cowardly?) op-ed is more my style.

Honoring Robert E. Lee seems nonsensical in the 21st Century, and yet his name is still there, hyphenated and on a par with George Washington’s. And all of us on this idyllic track and field act nonchalant about it, accepting of it, even the kids of color proudly wearing their W-L jerseys. Unless, of course, they are all harboring their own unspoken fantasies about making a scene about it.