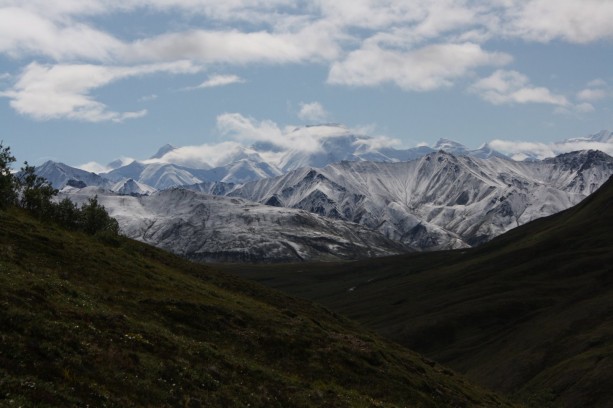 I traipsed through the buoyant Denali tundra, the wet slush hitting my rain-pants. A highly knowledgeable guide from Camp Denali explained the various mosses and lichens. I walked by a large, curious-looking mushroom.

“What’s that?” I asked my guide, suddenly alert. She confessed that fungi weren’t her forte. Hmm… If I had an Internet connection or 3G I could look it up right now, I thought, bursting my Alaskan wilderness bubble.

I’m not the only hiker who secretly fantasizes about holding up my phone and taking a picture of a flower to have it identified; comparing a picture of Old Faithful today to Old Faithful in the past with a simple stream on my iPad; downloading audio tours; navigating maps; and learning social history routes along my way.

The tastes of the public are changing and those of us in the Great Outdoors business are all considering how to negotiate a wired generation, reliant on iPads and cell phones. Young, diverse audiences–the future park attendees–have grown up with technology as a second language. Traditional interpretive materials-books, brochures, booklets, DVDs, visitor centers, rangers–are losing traction as people turn to the Internet to get park information.

Maybe technology will soon become nature’s primary curator, enhancing the visitor experience in the National Parks. But doesn’t the very definition of nature carry with it a presumption of being unplugged?

Don Kim, Program Associate for Web and Social Media for the Association for Partners in Public Lands (APPL), a nonprofit that works with the agencies that oversee public lands, says there is no easy, absolute answer to the question of how much technology is too much, outdoors. “There are two different worlds with conflicting ideologies,” he said. “One is that you’re out there on your own. Nature. The other is that technology is inevitable…but you have to understand that as a park, you still have to be able to market yourself. The idea is to get people there.”

“Geocaching” services are infiltrating parks, according to Kim. “You can map out your routes while you’re hiking and archive, collect photos, put them into the same route, same camping trip, all through the GPS on the phone,” he explains. Petrified National Forest, for example, has a National Park Service (NPS)-sponsored “EarthCache” program, leading visitors to some of the park’s significant geological resources.

Self-contained apps available in real time can be downloaded before entering parks, like “Oh, Ranger!”, the American Park Network’s app sponsored by Ford. There are dozens of thorough Audubon Guide apps on nature on wildlife, including one on North American mushrooms (if I had only known!). There are also practical apps like the phone flashlight, which I’ve personally used on multiple occasions. (Apps don’t just replace paper, but battery-operated camping gear!)

But the tech world doesn’t always jive with park infrastructure or aesthetics. Many visitors understandably want to keep technology out. Based on public feedback in Yellowstone, Wi-Fi was banned from the Old Faithful Inn and the Lake Hotel, according to NPS. The public also complained that cell phone towers were eyesores at Old Faithful and Mt. Washburn.

Where technologies do proliferate, they even challenge the educational role of the classic National Park gateway: the visitor center. Last August, Yellowstone completed its new visitor’s center at Old Faithful. With a $27 million price tag, it’s state-of-the art and hopping. Nonetheless, in this age of self-guided, app-driven and GPS-oriented consumers, Park Service Director Jon Jarvis concedes that the fate of National Park Visitors Centers is precarious.

Perhaps Designated Wilderness Areas should remain the bastions of silence, and National Parks, which have always been the tourist’s darlings, should face the music and start planting cell phone towers and instituting Wifi.

Perhaps the real future is in the virtual world and not the tangible one; the $750 million of our recovery dollars dedicated to NPS shouldn’t be all spent on roads or new facilities. Some of it should be devoted to better technology and social media trainings for rangers, to meet modern needs and engage tomorrow’s visitors.

That is, if the technology doesn’t simply replace the need for rangers at all. Tim Merriman, Executive Director of The National Association of Interpretation, which trains Federal agency employees who work with natural resources, recently told me: “I don’t know if you can imagine going on a hike with a robot or a machine.” A smart phone won’t protect you from a bear or grab your hand when you fall into a stream. “We’re social animals and having that friendly interface with a person is still a value.”

Merriman doesn’t see technology and live interpretation as mutually exclusive, either. On the contrary, he sees them as mutually advantageous. Technology aids scientists through advances like GPS animal tracking, data projection, and sound amplification, he explained. But visitors need capable humans to help interpret technological data.

But Merriman isn’t sure where to draw the lines. “I’m the kind of person who wants Internet wherever I go,” he confessed, but also remembered the deafening noise of the small airplanes when they were first introduced in the Grand Canyon.

“Wow,” he recalled thinking, “this is not solitude.”

It is a beautiful idea that human beings might collectively decide to create sanctuaries away from the world of technology; where connection can be considered equally as strong through the fibers of the earth as it is through data in the air; where we can teach kids how to put down Angry Birds for five minutes and look around; where we can go to learn of the darkness. The quiet. The loneliness. The awe. The last sliver of a reminder of what was.

The conclusion of my Alaska trip took me to a modest, woodstove cabin, shared by three other traveling companions at the end-of-the-road in Denali. In the middle of the night, the rain cleared and I awoke to the alpenglow of Mount McKinley. Finally. I reached for my cell phone to take a picture so I could email it to my nephews in New York and post it on Facebook.

But I had to squelch my impulse to share such beauty:

My phone was dead.

It was just me and the cold, beaming mountain.