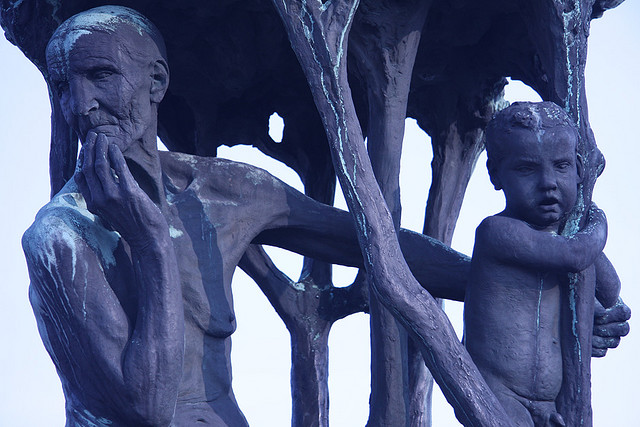 Last October, in Oslo, amid rainfall and the first cold breaths of winter, I ventured outdoors to a place I had visited before: Oslo’s Frogner Park, home to a work of genius called the Vigeland sculptures. I had first encountered them several years ago and found myself moved beyond expectation. Returning to see them, I was again overwhelmed.

The sculptures, of which there are 192, depict more than 600 human figures, all life-size or larger and expertly rendered in bronze or granite. They are named after their creator, Gustav Vigeland, a sculptor who lived from 1869 to 1943. His monumental work took nearly four decades to complete–from 1907 to 1942.

All of the figures are naked, not a stitch of clothing on any of them. Yet the display isn’t lurid in the least. The females are sturdy and solid, the males robust but tender, genitalia unabashedly exposed. They frequently appear in allegorical groups: as adolescents in a game of leapfrog, or as a mother and father with their child, or as two lovers in a state of bliss, foreheads touching tenderly, or as two lovers in a state of conflict. One of the most famous sculptures is of a toddler throwing a rageful tantrum, face scrunched up in his lilliputian fury. All phases of life are represented–infancy, adolescence, adulthood. Even a fetus and a decomposing skeleton make an appearance.

The Vigeland sculptures are the apotheosis of a distinctly Scandinavian sensibility, one in which art is prized and the unclothed body is seen as a celebration of health, not of license. In Oslo, nearly every park, street corner, and house seems to be studded with sculptures, many of them nude figures, old and new, traditional and modern.

This esteem for the human body shorn of pretense can surprise the visitor. Once after I had landed at Oslo’s Gardermoen airport, I saw a magazine stand adorned with the front page of a major daily newspaper showing a huge color photo of ten bust-baring, smiling ladies. What’s this, I thought? The Norwegian version of Rupert Murdoch’s page-three cheesecake photo? No, as I looked closer I saw that most of these women were at least sixty years old. Each was missing one of her breasts. They were survivors sharing their stories during a week of breast-cancer awareness. They smiled into the camera unashamedly, fearlessly.

The Vigeland sculptures not only celebrate a particular idiom of la dolce vita, the same spirit that takes pleasure in all things organic and unadorned–whether it’s food or the human body. They also pay tribute to community and togetherness. Some of the figures are arrayed around a large, grand fountain, and others line up evenly on either side of a long bridge. Still others are scaling a giant granite obelisk jutting into the sky. They writhe, but, unlike those in Rodin’s Gates of Hell, with purpose, not despair. There is a sense of unity, of the figures carefully supporting one another as they make their way toward some kind of salvation at the summit, which is occupied by sculptures of children stretching toward the sky.

I walked among these hundreds of figures as if through a forest, overwhelmed and awed. Vigeland’s artistic achievement is on the scale of Michelangelo’s Sistine Chapel or Gaudi’s La Sagrada Familia, although hardly as recognized.

That Vigeland died in the dark years of Nazi occupation, when the cult of death ruled, heightens the power and poignancy of his achievement. Today, as Oslo recovers from the rampage of mass murderer Anders Behring Breivik, Vigeland’s creation stands in defiance of all that the killers of this world represent. A life-affirming thread–you might even say a cult of life–runs through the entire mise-en-scène like a sturdy vine.

Norwegians take great pride in the Vigeland sculptures. When I was trying without much luck to make conversation with one taciturn taxi driver, an older Norwegian with white-streaked hair and square aviator eyeglasses, his face lit up when I praised the Vigeland sculptures. “Thank you,” he said with a wide smile, bowing slightly as if thanking me on behalf of his country. I was, once again, moved.

Steven Hill is the author, most recently, of Europe’s Promise: Why the European Way Is the Best Hope for an Insecure Age.