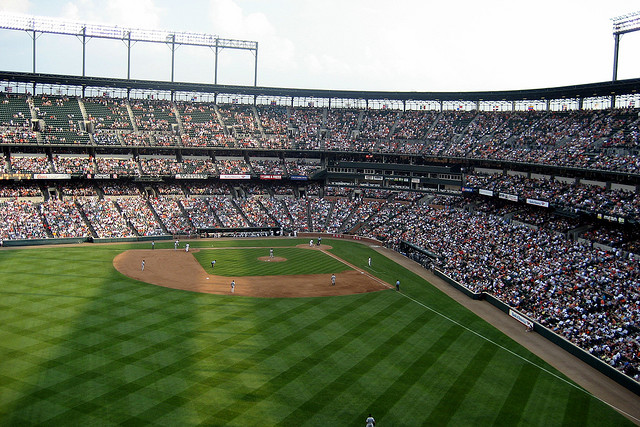 I never had the chance to meet Mike Flanagan, the former Baltimore Oriole pitcher and baseball executive who took his own life over the summer.

But if given the chance, I would have thanked him for one night on the South Side of Chicago, when he relieved my pain.

The nine timeless innings of baseball are designed to remove us from life’s stressful machinations. In his poem “At the Ballgame,” William Carlos Williams wrote,

the crowd at the ballgame
is moved uniformly
by a spirit of uselessness
which delights them.

Whenever I head to the ballpark, my feet never touch the ground. The first thing I look for are the lights of the stadium as I approach. Inside, that first glimpse of a lit field through the section ramp cures me.

My parents went their separate ways in 1970 when I was seven years old. In that moment, the Baltimore Orioles became my family, and I have lived and died on the outcomes of their games ever since. The Orioles in the ’70s were easy to live with. The players came to our baseball clinics, shopped in our grocery stores, and stayed for many years in the same city. Flanagan was one of those guys. His home was not far from where I grew up.

Then came 1979. It was a promising season for the Orioles. My father and I listened to games on the radio in his cool basement and ate steamed crabs on the kitchen table covered in pages of the Baltimore Sun. Mike Flanagan won the Cy Young award that year with 23 victories.

And, in late summer, as I prepared to start my junior year of high school, I moved from Baltimore to Chicago.

It was my choice. My mother, stepfather, and my younger brother were relocating to Chicago. I could go with them, or stay in Baltimore with my father and stepmother. My younger brother had become ill the previous spring, and I had developed a bond with him. We had stuck together and I couldn’t be without him.

That fall, the Orioles beat the Angels in the playoffs and faced the Pirates in the World Series. Down three games to one, Pittsburgh came back to win the series. The Pirate rallying cry, “We Are Family,” carried a bitter ironic twist. My first Chicago winter was brutal with an icy wind slicing off the lake. I missed the Birds and my Dad back home.

In Chicago, I once saw the Orioles play in the old Comiskey Park. It was the summer of 1984. Old Comiskey was a hulking mass of painted white brick on the South Side of the city. While Memorial Stadium in Baltimore was my hometown park, Comiskey became a rite of passage. I had my first baseball beer, an Old Style, within its confines. Years later, its demolition inspired me to write a poem:

When my cleats have reached the warning track
and my innings are almost done
I hope heaven is a grand old ballpark
with bleachers in the sun.

That night in Comiskey, I sat in the upper level of the right field grandstand. We were up so high it was impossible to see what happened to balls hit to deep center.

Hall of Famer Tom Seaver-the movie version of the star pitcher, smooth and rich and powerful-started for the White Sox. Seaver mowed the Orioles down. He stifled the Oriole bats, inning after inning. He glared from the hill with a studied countenance. Seaver was perfect until Gary Roenicke singled with two outs in the fifth.

Mike Flanagan started for the Orioles. He didn’t look the part like Seaver did, but he matched Seaver pitch-for-pitch, striking out eight. On the mound, he resembled a warhorse, carrying a heavy weight but refusing to give in. He held up the team all by himself.

Flanagan surrendered two meaningless singles. The Sox hitters had no answer for him. A basketball player, a fly fisherman, and the owner of a wicked sense of humor, Flanagan was a student of the game. You rooted for him.

In the ninth, Seaver got into trouble. Cal Ripken walked, and Eddie Murray singled for the Orioles. A bunt moved them over to second and third. Gary Roenicke-again!-tomahawked a grounder over the bag at third for a two-run double and the Orioles held on to win. They found a way to win back then.

It was the kind of pitchers’ duel that never happens anymore. More than that, it made me forget that I was in a city that never felt like home. I sat in those seats wondering what I was going to do with my life, and I was scared.

I drifted away from the Orioles in college. Drinking too much, taking drugs, and listening to the Clash at the University of Virginia distracted me from my obsession with baseball. In the fall of 1984, I would black out behind the wheel and miss a head-on collision by inches. For the next 15 years, I would plumb the depths of depression and explore the dark side of addiction.

As a poet, I had potential but not the discipline or the focus to labor over every word. Accepted into the writing program at Columbia University, I chose instead to partake in the pleasures of New York City that were available 24/7, and was asked to take a leave of absence after the first year.

I worked in the World Trade Center as a temp for a bank and slowly worked up a collection of poems that were good enough for readmission. I still frequented dangerous places, apartments where the only furniture was a table and a scale to weigh rocks of cocaine. I justified this behavior as part of a necessary process in becoming a poet. William Blake, Dylan Thomas, and Jack Kerouac were my idols. I had forgotten about Mike Flanagan.

Then I revived myself, and I revived my interest in baseball. I went back to school. I met an intelligent and beautiful Ph.D. student in Renaissance literature and began working on my poetry thesis. Jill’s best friend had corporate seats nine rows behind the visitor’s dugout and supplied me for years. After the Orioles nearly won the division in the fall of 1989, I proposed to Jill at Rockefeller Center a few days before Christmas. The motto for the Orioles that season had been “Why Not,” and I let the slogan guide my decision.

I didn’t stop drinking or smoking marijuana. I still found myself in dangerous neighborhoods after midnight, stumbling around, inviting harm. When the Orioles headed into the 1997 All-Star break with a 43-17 record, I separated from Jill. I was certain the Birds were going to the World Series, and I didn’t need to answer to anyone. I stayed with friends, roamed the city at all hours like a nomad, and continued to destroy myself.

Nineteen ninety-seven didn’t end well. The Orioles lost in the playoffs, and my marriage ended too. I headed south for a new publishing job in D.C. and a change of scenery. The good news was that I was closer to my team. I found an apartment in Adams Morgan and began revising my unpublished poetry manuscript. I had never lived alone before, and my drinking escalated from beer to vodka and wine-and blackouts ensued. My new job required extensive travel, and I missed flights from drinking. In 1999, I sought help.

I quickly realized why the collection had never been published. Written under the influence, the poems were barely intelligible. I worked on them feverishly and the manuscript won a first book contest. American Boy was published in 2000.

The Orioles were still headed south. In 1998, they would begin 14 consecutive losing seasons. But those same years have been the happiest of my life. My kids wear Oriole jerseys and belong to the dugout club. I am living back in Baltimore after 30 years, and the team is still losing. Life for me has been a journey into acceptance of the wins and the losses.

I have watched or listened to nearly every Orioles game during those 14 years. Flanagan was there too-as a pitching coach, as an executive vice president in charge of baseball operations for a few years, and as a broadcaster. I’ve found the pain of losing can get visceral at times, but it’s nothing like the early days when my entire outlook depended on the performance of nine men in black and orange.

Not everyone learns to live with losing. On August 24, police were called to Mike Flanagan’s home in Baltimore. They found him dead, of a self-inflicted gunshot wound, on a trail on his property. Some reports of his suicide suggested he was having financial problems or was upset about his broadcasting contract with the Orioles.

Other reports-the ones that Orioles fans believe-said that he was despondent about all the losing.

I don’t know exactly what to think, but if I start drinking again after 12 years of sobriety, the losses will pile up.

When my friend Timmy Hodge would run into him at the grocery story he would say, “Thanks, Mr. Flanagan, for your hard work.”

“We’re having a tough time out there,” Flanagan would reply. “But we’ll get ’em.”

Since Mike Flanagan’s death, I have felt the remaining burden of losing lifted. He carried it with him when he decided to take his own life. He died for the Orioles to win, as strange as that sounds.

On the last night of the 2011 season and for the first time in 14 years, the Orioles played a meaningful game in late September. Their game against the Red Sox was important-for the Red Sox, who needed to win to make the playoffs. It was my first trip to Oriole Park since Flanagan passed away. I was struck by the black banner under the Press Box with his number 46 in orange. It stayed in my thoughts as I watched the game.

The park was buzzing with a playoff atmosphere. The weather seemed more like late July. Sox fans teemed at the turnstiles, but so did O’s fans. The game itself seemed suspended in an eerie timelessness. It had its own weight as a one-game season. There were roving ESPN camera teams even though we were in last place.

For weeks, I’d wanted the season to be over. When the winning run crossed the plate, denying the Red Sox a postseason appearance, I suddenly wanted to watch these young Orioles one more time.

I knew the warhorse from New Hampshire who matched Tom Seaver pitch-for-pitch would have loved this game. I also realized that Flanagan’s blood, like mine, was tinged Oriole orange.

When it’s time for me to take the hook and head for the showers in the sky, I have asked my wife to secretly sprinkle my ashes in the outfield of Camden Yards. I’d like to hang around the field with former Orioles greats like Elrod, Cuellar, McNally, the Babe (whose father owned a saloon in what is now center field), and Flanagan.

A ballpark is close enough to heaven for me.

Dean Bartoli Smith, author of American Boy, is a poet, journalist, and father who lives in Baltimore.