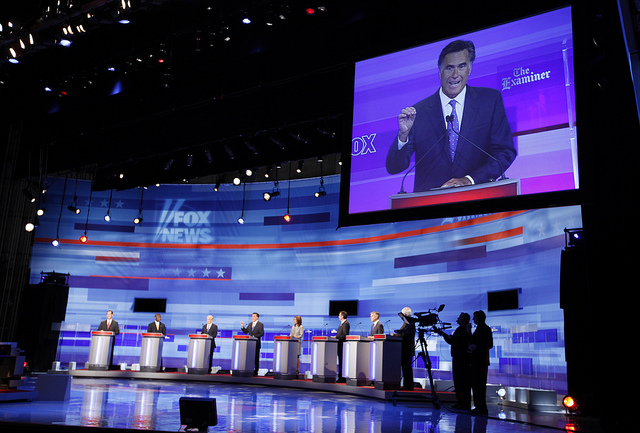 The bell rang for Round 10, as CNBC hosted its Republican candidate debate on Wednesday. The financial network (and Herman Cain!) hoped to focus the discussion on economic issues.

Nowhere is the dubious power of visual media in politics more apparent than in presidential debates. On the one hand, the debates recreate a public square, as they remain the only moments in a campaign when large numbers of voters focus in simultaneously on the election. Even at a time when mass audiences are shrinking as entertainment and information sources multiply, Americans are tuning in to these debates in great numbers. More than 60 million Americans watched Barack Obama debate John McCain in a single night in 2008. And if the 2011 Republican primary debates are any indication of what’s to come this time around, ratings will surpass that level in 2012. Viewership in the nine GOP primary debates so far this year is double that of 2007-2008, with the Fox News/Google debate on September 22 setting a primary debate record of 6.1 million viewers.

At the same time, though, the debates have always led to worries about their seriousness and substantive depth. From the very first televised presidential primary debates in 1956 and general election debates in 1960 (the four so-called Great Debates between Kennedy and Nixon), critics have argued that presidential debates are neither great (they substitute image for substance) nor debates (they enable evasiveness over direct engagement). Following the final Kennedy-Nixon debate in 1960, the historian Henry Steele Commager wrote an op-ed entitled, “Washington Would Have a Lost a TV Debate,” and took aim at the broadcasts for favoring the “the glib, the evasive, the dogmatic, the melodramatic” over “the sincere, the judicious, the sober, the honest in political discussion.”

If Commager had lived to see the latest debates, his judgment certainly would have been only harsher, as today response times have been shortened to as little as 30 seconds, and, increasingly, performance is measured in terms of memorable sound bites, zingers, and theatrical gestures–not ideas. Texas Governor Rick Perry may not have demonstrated much clarity or eloquence in the debates to date, but his offstage criticism of them (when wondering aloud if he couldn’t skip the rest) seems quite accurate. As he recently told Bill O’Reilly on Fox News, “These debates are set up for nothing more than to tear down the candidates. It’s pretty hard to sit and lay out your ideas and concepts with a one-minute response … [A]ll they’re interested in is stirring up between the candidates instead of really talking about the issues that are important to the American people.”

Concerns about the merit and value of the debates take on special urgency in times, like now, when the debates seem to be exerting an unusual degree of influence. Indeed, it is hard to recall another pre-primary season when debates have so dramatically altered the field.

It is not just that Herman Cain’s rise, Gov. Perry’s swoon, and Mitt Romney’s steadiness all seem directly connected to their respective debate performances. What is also remarkable is how the debates now serve the unintended role of prolonging and strengthening the political lives of the weakest candidates, providing them with a platform to seek popularity and enrichment (as appears to be the case with Cain and Newt Gingrich) or to voice ideological positions at the margins of the party (Ron Paul). As Fred Barnes wrote in a Wall Street Journal op-ed in October, “The biggest beneficiaries of increased viewership are the also-rans. The debates keep them in the race. At no cost, they get the attention of millions more voters than they ever could on their own.”

All of which begs the question: Are such debates an appropriate filter for selecting our commander in chief? Given their freewheeling, non-deliberative character, do debates deserve such large, and apparently growing, influence over the process?

Such questions strike at the underlying assumption of all presidential debates: that there is an intrinsic connection between speaking well and being a good leader. But is this the case? And should we not be skeptical of this connection when the meaning of speaking well, as the GOP debates clearly show, has shifted from an eloquent capacity to persuade an audience about an issue to the mere ability to successfully endure the pressure and unpredictability of a high-stakes, semi-uncontrolled public appearance? George W. Bush, whose famous ineloquence did not prevent him from more than holding his own in both the 2000 and 2004 debates, not only in some sense embodied this transition but proclaimed it when his quip in a debate with Gore–“I’ve been known to mangle a syl-abble or two”–skillfully made light of traditional oratory and won supportive laughter from the audience. When speaking well becomes less about persuasion than a test of mettle, winning debates becomes less meaningful than avoiding failure. As Bush later reflected in 2007 about the debates, “I’m not sure you ever win them, but you darn sure can lose them.”

The numerous GOP debates this cycle have accelerated this redefinition of what constitutes competent public speech. The greatest blunders have not been substantive or tactical errors (like Gerald Ford’s assertion in 1976 that there was no Soviet domination in Eastern Europe), but poor deliveries of otherwise cogent points. Arguably the single greatest gaffe in the debates so far–Perry’s painfully awkward attempt to recite a litany of Romney’s flip-flops in the Fox News/Google debate–received poor reviews not for being untrue, but for being so ineffectively expressed. Cain, for his part, has impressed as an orator, not necessarily because of the substance of what he says, but because of the steady sonority and indomitable jocularity with which he says it. When Romney has done well, it has been more for his capacity to reflect ease and intelligence under pressure than for any particularly successful framing of the agenda. If the issueless politics of personality inaugurated by the television age initially signaled that candidates would seek to persuade voters over non-material, intangible considerations, the GOP debates point to a kind of political discourse increasingly divorced from persuasion of all kinds, where the primary objective is to maintain a composed communicativity under conditions of intense stress and contestation.

It is the injection of risk and uncertainty into what can otherwise be an excessively choreographed process that makes debates so riveting to viewers and the media. In 1984, the infamous GOP strategist Lee Atwater complained the debates were “artificially contrived pressure cookers which do not coincide with actual pressures that confront a president.”

Yet even if the debates are what they are criticized for being, they still serve crucial democratic functions. The capacity to withstand the debates is not altogether irrelevant to the requirements of leadership in a contemporary mass democracy. Once in office, presidents must field questions from an often hostile press, confront hecklers, appear jointly with foreign leaders not always sympathetic to American interests, and, in times of crisis, potentially make spontaneous decisions about what to do or say on the public stage (recall George W. Bush’s exhortation to assembled firefighters at Ground Zero in 2001). Being able to think on one’s feet and display extemporaneous wit and charm under pressure is one of the signs of charisma in its healthy, politically necessary form.

The combative, risk-filled nature of the debates not only filters people suited for this role but to a certain extent trains them. The debates, for all their limitations, require preparation, discipline, and an ability to focus on alternative viewpoints, even if only to reject them. Such preparation pulls candidates out of the myopia and sycophancy of their own campaign bubble. As Bill Clinton put it in an interview with Jim Lehrer, “Even if these debates don’t change many votes and, you know, normally both sides do well enough so they can avoid any lasting damage, but having to do them and knowing that if you blow it, they will change a lot of votes, forces people who wish to be president to do things that they should do. And I am convinced that the debates I went through, especially those three in 1992, actually helped me to be a better president.”

The debates are also the closest thing we have to a communal hazing of our future leaders–something which has a clear, if unorthodox, egalitarian value in a democratic society. Most of the time, candidates and their handlers maintain strict control over the conditions of publicity, choosing when and how to appear, and performing carefully orchestrated public relations events. The debates offer a rare break from such isolation and imperiousness.

Yes, these debates (which increasingly revert to their literal, etymological meaning of battles) are far from ideal political discourse. But they still provide some of the most democratic moments of the political calendar. When we vote, we choose our leaders. But in the debates, we see them and achieve an all-too-rare surveillance of their persons.

Jeffrey Green is assistant professor of political science at University of Pennsylvania. He is the author of The Eyes of the People: Democracy in an Age of Spectatorship.