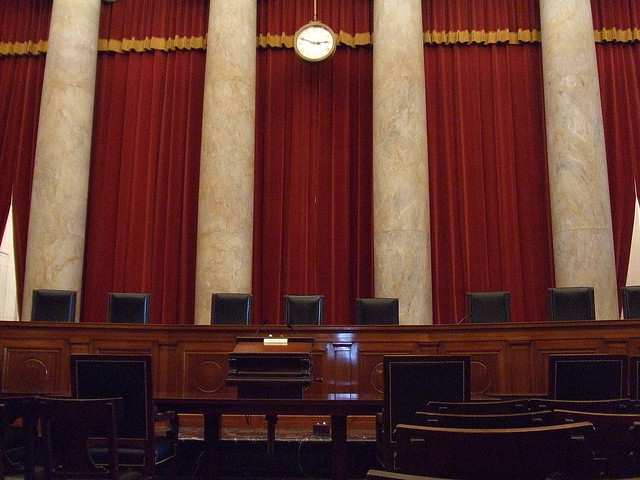 Whether you are attending a Tea Party meeting or an Occupy Wall Street protest, you are unlikely to hear that rallying cry. But the chronic understaffing of the federal courts is becoming a significant crisis. This decimation (literally a cut by 10 percent) threatens basic protections guaranteed in the Constitution, including the right to due process and a speedy trial.

Neither party has much incentive to crusade energetically against this attack on the judicial branch. The opposition party never wants to fill the judgeships, at least not until its president gets to do the nominating. The majority is wary of accusations that it is “politicizing” the courts by packing them with partisan appointees.

The public only tunes in when a vacancy occurs on the Supreme Court, when nomination battles bring the courts into the limelight. But those vacancies do get filled, and what’s left unnoticed are the significant number of empty benches below the Supreme Court level. Often, nominees for these openings do not even get so far as an up or down vote after enduring months of a life in limbo.

The issue has been in the news of late, due to the Republicans’ filibuster of Caitlin Halligan, President Obama’s nominee to join the important federal appeals court in Washington, D.C. And this is no isolated stalemate. There are currently 80 open judicial seats out of 874 federal judgeships. That’s nearly a 10 percent vacancy rate. Twenty-nine of these are classified by the federal court system as “judicial emergencies,” due to the mounting caseload in those jurisdictions or the duration of the opening. Many of these vacancies have been open for years. Nineteen additional seats are scheduled to become empty over the next seven months, potentially raising the vacancy rate to as high as one in nine.

Can you imagine if we had a 10 percent vacancy rate for governorships across the nation–five states without a governor? Or how about a Congress to which 43 districts across the country didn’t bother sending representatives, and to which 10 states sent only one senator? What if one Supreme Court seat was simply left empty for an entire term because the Senate would not agree to hold a vote? Any of these scenarios would be scandalous, for good measure, and it is no less scandalous that this is the norm in the judiciary as a whole.

The Senate bears the lion’s share of the blame. Senators on both sides of the aisle have made a habit of holding nominations hostage. Democrats routinely stalled Bush appointees, and Republicans are now doing the same to Obama’s choices. As the vacancies mount, the stakes continue to climb. A president who could consistently push through his appointments would drastically alter the shape of the federal courts for decades to come.

The Senate may be inching toward ending the minority’s ability to block judicial appointments. But suddenly opening the floodgates, though appealing, could do actual harm to the courts. The majority must avoid the perception that it is merely eager to pack the courts with political allies. Such an impression would undermine the courts’ legitimacy.

What is needed is a grand bargain for the judiciary that addresses both the long-term problem of stalled nominations and the current crisis of understaffing, while avoiding the appearance of court packing. To address the long-term problem, the Senate should adopt a rule requiring a vote on all judicial nominees within 90 days. The “advice and consent clause” of the U.S. Constitution requires the Senate’s approval for judicial and other high-profile presidential appointments. But Senate rules govern how it grants such consent. Only in recent history has it taken a super-majority to move along judicial nominations. The Senate rule could set a longer timeline for Supreme Court nominees, but 90 days should be enough time for a vote on lower court nominations.

To address the current crisis, President Obama should strike a deal with the Senate. For his part, he should agree to defer on one-third of the nominations for current judicial vacancies to Senate Republicans. As a constitutional matter, of course, the nominees would remain the president’s, but by finding a mechanism to engage Republicans in these choices, the White House could help resurrect the type of true consultation that once took place in filling these slots. Such a proportional agreement that resulted in the appointment of judges from each party would ensure that the federal bench maintained an ideological balance.

In exchange for a larger role in the nomination process, the Senate would have to agree to a tight voting deadline and filibuster-proof schedule for this new set of judicial nominees. All nominees should receive an up or down vote within the next six months. After that, the Senate would take up its new rule, allowing future presidents to keep the judicial bench fully staffed.

In theory, the judicial branch is co-equal with the legislative and executive. But it can only operate properly if not suffocated by the Congress. The Senate and President Obama must find a way to break that logjam, and soon. Otherwise, basic Constitutional rights like those of due process and a speedy trial are in danger of becoming empty promises.

Jason LaBau is a postdoctoral research fellow at the Huntington-USC Institute on California and the West. He is currently at work on a book project, Phoenix Rising: Arizona and the Enduring Divisions of Modern Conservatism.