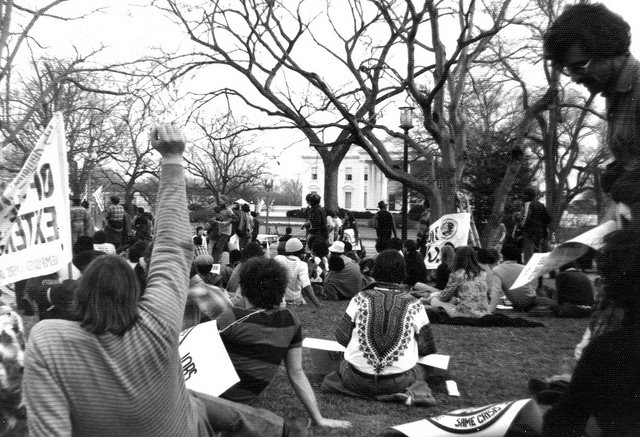 I grew up in the South, but as part of a carpetbagger family. My Californian parents moved to Jim Crow North Carolina in 1951 for my dad to take a job as a young psychology professor. They didn’t quite know what they were getting into. Early on, my father went to see a movie at the downtown Carolina Theater in Durham, got in the ticket line, waited, and waited some more. The line didn’t move. But other people walked by occasionally and went right in the door. He looked around and realized he was the only white person in the line, and the others were studiously avoiding looking at him. He slunk up and through the door.

With four small kids and few modern appliances (air-conditioning and dishwashers remained mysterious to me until my teens), my mother hired an African-American woman to help her with the cooking and cleaning a few afternoons a week. At the end of her first day, she gathered her coat and purse and said goodbye. On her way out the door, she opened her purse for my mother to examine. My mother, a left-liberal daughter of Carmel, was stunned–and horrified.

I entered the 1970s focused on the one thing boys my age in North Carolina agreed was most important: basketball. I played for the team at my liberal private school, founded decades before school desegregation. Several of my teammates were black, with robust Afros, so we had some fun with the brand new “white-flight” academies we sometimes played against. We’d all run on to opponents’ courts for warm-ups muttering black-power chants, just to enjoy the stares from the small-town home crowds. This made the white kids on our team certain we were cool. Who knows what our black teammates actually thought of us, amid the ample confusions and complications of middle-school life, but they went along with the posturing.

What we all had some sense of was that the world we lived in was very different from the world of our parents. Private prejudice hardly disappeared, but discrimination in public life was rapidly losing its acceptability, even in the South. The biggest changes came in the 1970s. “The Sixties” actually happened in the Seventies for the vast majority of Americans far from Greenwich Village, Berkeley, and Haight-Ashbury.

Building out from the successes of the civil rights movement, egalitarianism and social inclusiveness seeped through American culture in the 1970s. A new wave of non-European immigrants and refugees washed ashore, mostly from Latin America and Asia. Disabled children found formal inclusion in public school classrooms; a 1975 law required that they be educated in the “least restrictive environment.” And gays and lesbians began their long climb to today’s open inclusion, even in the U.S. military. The first gay-pride march unfolded in New York in 1970, and the American Psychiatric Association deleted homosexuality from its list of “mental disorders” in 1973.

The largest changes of that momentous decade came to the largest “minority” group: women. Girls also had a basketball team at my school in 1970, and they shared our gym. But they played a different game. They used six players, and two had to remain on either side of midcourt–presumably so they wouldn’t have to run too hard. Girls were still to be protected. They were to “glisten, not sweat.”

The passage of Title IX in 1972 began to put an end to this. Girls and young women were now accorded equal access to athletic facilities and opportunities. The percentage of females participating in school sports skyrocketed. By the end of the 1970s, being athletic had become a mainstream part of girls’ lives in America. In combination with the sexual revolution and the spread of information about women’s health, such physicality suggested a changed understanding of American female identity.

Legal forms of female exclusion ended in the 1970s. In 1973, the Supreme Court banned the listing of jobs in male and female categories. Elite private universities and boarding schools began admitting women, as did the nation’s military service academies. The percentage of women in graduate and professional schools shot up. “First woman” stories abounded in the professions during this decade: first woman rabbi, first woman Episcopal priest, first woman commercial airline pilot, and, in 1981, the first woman U.S. Supreme Court justice.

The erosion of male-female segregation in work and many other spheres of life affected nearly every American family. Before the 1970s, female authority over men in the workplace was extremely rare; today it is commonplace. By the time I entered college in the Bay Area in 1976, living in a coed dormitory did not seem exciting or peculiar for more than a few days. There was little that was romantic or sexy about the 7:00 a.m. appearance of the other sex on the way to the shower in the other bathroom.

If “racist” and “sexist” became serious insults in the 1970s, the same decade saw one other momentous shift: a steep decline in Americans’ faith in government and a turn toward free-market principles. The country became more economically conservative, in other words, at the very same time that it turned more socially liberal.

The traumas of that decade–defeat in Vietnam, Watergate, oil crises, and stagflation–convinced most Americans that the country was badly off track. Activist government of the New Deal kind, after 40 years, lost its credibility. Citizens looked increasingly to the private rather than the public sector to solve big problems.

With the end of the draft in 1973, market logic now determined who would defend the nation in the new all-volunteer military–whoever wanted the job, or had no better employment option. California’s Proposition 13 in 1978 lit a national tax revolt wildfire that has helped de-legitimate taxes ever since. The new spirit was for letting private citizens keep their own money. A tide of deregulation began in 1975 with the airline industry. This has since utterly changed the experience of flying, which is now cheaper but more crowded and less pleasant. The enthusiasm for deregulation of the financial industry helped bring on our current economic downturn in 2008.

The ascent of free-market principles contributed to both liberating and coarsening American life in the 1970s. The counterculture’s slogan of “Do your own thing” met the libertarian desire to eliminate government constraints on individual freedom. The impact was not a victory for social or religious conservatism. Deregulation and free markets did not “conserve” anything, especially not communities. Unrestrained capitalism is instead one of the greatest engines of change in modern history. “The effect of liberty to individuals is that they do what they please,” warned the originator of modern social conservatism, Edmund Burke, two centuries earlier. “We ought to see what it will please them to do, before we risk congratulations.”

Free-market enthusiasts didn’t wait to see. They instead encouraged letting people “do what they please” with their money. Two industries long associated with vice began, as a result, to metastasize during the 1970s. First, gambling spread in the form of new state lotteries and the first casinos outside Nevada, beginning in Atlantic City, New Jersey, in 1978. Today gambling opportunities have seeped into nearly every corner of the American landscape, and most citizens don’t give it a second thought.

Second, pornography emerged from the shadows to become much more mainstream. Deep Throat played in regular theaters in 1972 (including on my college campus four years later), and three years after that the invention of video-cassette recorders let people view in private whatever they wished. Today a smorgasbord of pornography awaits any cable television customer or hotel guest.

One final result of the rise of free-market principles over the past 35 years has been the growing gaps of wealth between richer and poorer Americans. Globalization and technological innovation have also contributed to inequality. The reduction of taxes and the withering of the welfare-state safety net, along with decades of emphasis on liberating capital, have made the United States an even better country in which to be rich–and an even tougher nation in which to be poor. At the same time that we have become more equal in social terms, we have become less equal in economic terms. This explains some of voters’ confusion about whether we are a more liberal or more conservative nation than we used to be. We are both.

How should we feel about this? Social egalitarianism appears to be deeply popular–Americans wish fervently to believe that their land is one of opportunity for all, an idea bolstered by continuous immigration. Explicit discrimination against any group of people is widely reviled. Even many conservatives proudly noted that Barack Obama’s 2008 election proved the fairness and opportunity of American society.

Growing economic inequality is more divisive and troubling. For some on the right, it is natural: a result, they believe, of hard work and innate ability. But for a much larger number of citizens, the decline of a vast and economically secure middle class seems to undercut the very promise and achievement of American life. Whatever its limitations, the Occupy Wall Street movement has articulated the growing unease with rampant market-driven individualism, unbalanced by any larger sense of the common good and collective purpose. Is the United States ultimately just a land of individuals concerned primarily with piling up individual riches and achievements? This was never the goal of either traditional conservatives or liberals, both of whom were deeply committed to the quality of the communities in which they lived. I lived with both those kinds of folks when I was growing up in pre-1970s North Carolina, and the older ones among them–now gone on–would be ill at ease in contemporary America’s egocentric culture.

Thomas (“Tim”) Borstelmann is the E.N. and Katherine Thompson Professor of Modern World History at the University of Nebraska-Lincoln. He taught previously for 12 years at Cornell University. He is the author, most recently, of The 1970s: A New Global History from Civil Rights to Economic Inequality (Princeton University Press, 2011).