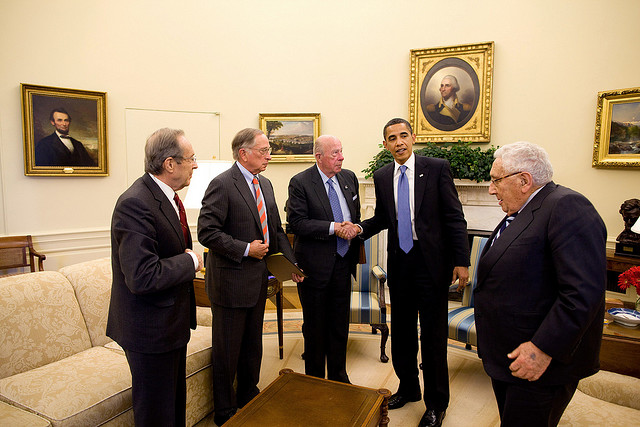 In this era of rancor in Washington, it’s hard to imagine a time when two of the most partisan men in the nation–Republican President Ronald Reagan and Tip O’Neill, the Democratic Speaker of the House–could set aside their differences to swap political stories and seek common ground on critical issues.

They did, as I witnessed from a ringside seat as a Washington correspondent for The New York Times. The rivalry was intense, the political skirmishing fierce, but both men could see beyond the parochial interests of their parties. Today, they would be run out of town. Non-partisanship–the notion that some matters transcend politics and call for united action–seems almost quaint. That is a great pity, for the daunting problems that the United States faces today cannot be addressed, much less solved, absent collective purpose and determination.

One exception to the poisonous partisanship of Washington is an improbable joint effort by five prominent Americans to reduce nuclear dangers and ultimately abolish nuclear weapons. I spent the past three years working on a book about nuclear threats and the effort of the quintet, and I found their collaboration remarkable.

The two Democrats are Bill Perry, defense secretary during Bill Clinton’s first term, and Sam Nunn, longtime chairman of the Senate Armed Services Committee. The fifth member of the group, Sidney Drell, is a Stanford physicist.

Over the past few years, the five men set aside their ideological differences. It didn’t happen overnight. The convergence of views evolved over many years, beginning in the Cold War, as each of the men came to grips with the destructive power of the American and Soviet nuclear arsenals. At the zenith of the Cold War, the two nations owned a grand total of nearly 70,000 nuclear warheads, more than enough to reduce both countries to fields of rubble and kill hundreds of millions of people.

The threat of global nuclear war ended with the disintegration of the Soviet Union in 1991, but a new set of nuclear threats soon developed, commanding the attention of the five men. Nuclear materials and technology spread to unstable nations like Pakistan and North Korea. Iran is likely to be the next member of the nuclear club, barring an Israeli or American military strike against Iranian nuclear facilities.

As they looked at the world after the terror attacks of September 11, 2001, Shultz, Kissinger, Perry, Nunn, and Drell realized that nuclear dangers were rising to a perilous new level. The unthinkable, a nuclear 9/11, was all too possible. As Robert M. Gates, defense secretary under Presidents Bush and Obama, told me, “If you were to ask most of the leaders of the last administration or the current administration what might keep them awake at night, it’s the prospect of a weapon or nuclear material falling into the hands of Al Qaeda or some other extremists.”

It takes just 60 pounds of highly enriched uranium to make a crude atomic bomb. Terrorists can’t enrich uranium–that requires industrial-scale operations–but if they can buy or steal the material, they can fabricate a bomb. Alarmingly, tons of highly enriched uranium are stored at inadequately secured sites in dozens of nations, a legacy of Cold War competition when Washington and Moscow gave away fissile material and research reactors to win allies.

When it comes to matters like national deficits and debt, the gears of American democracy seem frozen. That’s why the collaborative effort of Shultz, Kissinger, Perry, Nunn, and Drell is especially notable. Beginning with a Wall Street Journal op-ed article in 2007 signed by Shultz, Kissinger, Perry, and Nunn, the men have campaigned tirelessly on behalf of a series of practical steps to reduce nuclear dangers. That includes securing stocks of highly enriched uranium and ending the production of fissile material for weapons. To rally supporters in the United States and abroad, the men have also championed the long-range goal of eradicating nuclear weapons.

Today’s combatants in Washington–leaders like Nancy Pelosi and John Boehner, Harry Reid and Mitch McConnell–would do well to study the example of these five men. Theirs is not a love match. Differences among them remain, some acute. Their history is filled with conflict. Kissinger relentlessly hammered Shultz during the Reagan administration for thinking Washington could do business with the Kremlin after Mikhail Gorbachev become Soviet leader. Richard Nixon co-authored one especially caustic attack, an op-ed article that ridiculed Reagan and Shultz for mishandling relations with Moscow. (As Shultz told me, “They’re entitled to their opinions. But it turned out I was right and they were wrong about the biggest issues we faced, namely how to deal with the Cold War.”)

If Shultz and Kissinger can rise above such bitter differences and join hands with Democrats like Perry and Nunn, Congressional leaders should, at the very least, find a way to come up with bipartisan agreements to tackle America’s other pressing challenges. Although it may seem easier to bridge political differences in retirement than in high government posts, what brought the men together had far more to do with a cold-blooded conviction that an urgent problem must be addressed than any desire to heal old wounds.

It shouldn’t take the threat of nuclear annihilation to get policymakers to put the national interest above parochial party interests.

Philip Taubman, a consulting professor at Stanford and former New York Times bureau chief in Moscow and Washington, is the author of The Partnership: Five Cold Warriors and Their Quest to Ban the Bomb.

*Photo courtesy of The White House.