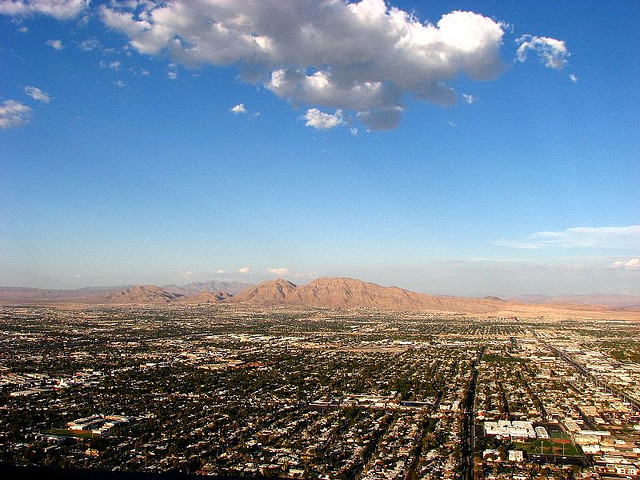 We hear so much about presidential candidates-and so little about life in the states that elect them. In “Beyond the Circus,” writers take us off the trail and give us glimpses of politically important places. Today, Nevada.

Don’t be alarmed by this unannounced letter. No one we know has died, and I’m not asking for money (although I, and many other Nevadans, could use it). I just thought, having lived in Nevada for more than 14 years, I’d recap my time here and let you know how your first-born son and the Battle Born State are faring. (OK. You know me too well. I’m being paid to write this letter, but don’t let that cheapen it.)

As you may recall, in December 1997, I packed my worldly possessions into my one-headlight Honda Civic and pushed off for Nevada, which I’d never even visited. (I thought I was being adventurous, but later discovered that’s how most people end up in the state.) Before I left Atlanta, our neighbor Bill Banks asked, “Why Vegas?” Saying it looked cool in Swingers didn’t seem like a satisfactory answer, so I said something about it being a place to set short stories and novels, to sports-bet without having to call a toll-free number in the Caribbean, and to explore the West and Southwest.

Crossing Hoover Dam and entering the Las Vegas Valley, I sensed I’d made the right decision. The Spring Mountains were swallowing the sun, painting the desert lavender. Nascent housing developments reached for the foothills. In the depths of the valley, the hotel-casinos of the Strip bloomed like wildflowers.

Even at dusk, it was clearly dawn for this one-time whistle-stop.

I was pleasantly surprised by the other 110,000 square miles of the state, too. Nevada is so much more than secret military bases and beef-jerky stands. It’s home to Reno (“The Biggest Little City in the World”), Lake Tahoe, Burning Man, ghost towns, cowboy-poetry festivals, and earthworks … dry washes and year-round rivers, bare deserts and dense forests, near-sea-level valleys and 13,000-foot peaks. Turquoise (though bathtub-ringed) Lake Mead, technicolored Valley of Fire, and snowcapped Mount Charleston are within an hour of Las Vegas.

I’ve come to view Nevada not as our nation’s junkyard or laboratory, but as a canvas randomly and beautifully touched.

As you know, I planned to stay in Vegas for only a year or two. But the city was booming and rife with opportunity. Every year, 70,000 people moved here-the population doubled in a decade-and 40 million visited. The unemployment rate rarely rose above 5 percent, the average price of a home was $300,000, and the casinos raked in more than $8 billion a year. Journalists christened it the “New Detroit” and the “First City of the 21st Century.”

After temping, freelance writing, and working on short stories for a few years, I joined the staff of Las Vegas CityLife. I covered politics, the environment, the literary arts, nightlife, and anything else that seemed interesting for the 80,000-circulation alt-weekly. The paper was regularly more than 80 pages, and I became managing editor. Though hectic, life was good.

Now, 50,000 residents a year leave Las Vegas-“Even the white people are leaving,” a Mexican cabbie told me recently-and visitation is down 20 percent. The unemployment rate rarely drops below 12 percent, the average price of a home is $115,000, and casino revenue is way down. The homeless, unemployed, and underemployed dress up in chintzy costumes (Mr. T, Bret Michaels, Capt. Jack Sparrow) and pose for photos for tips on the Strip and Fremont Street. The dope man is accepting food stamps in lieu of money. The $5 blow job is back in vogue. (Sorry, Mom, but it’s true.) Las Vegas is the “New Detroit” and the “First City of the 21st Century,” just not in the way the journalists envisioned.

Having written a book about exploring the underground flood channels, where I discovered hundreds of homeless people, and wanting to work on a nonfiction story collection, I left CityLife in early 2008. Six months later, the economy began to falter. I decided to work on the story collection, live off savings, and re-emerge when the economy improved. I’m still waiting.

In the wake of this spectacular boom and bust, the 2012 presidential campaign is underway in Nevada. President Obama visited Vegas a few weeks ago. My friend John, who lives in an underground flood channel near the “Welcome to Fabulous Las Vegas” sign, emerged from the shadows and got within earshot of the president. He thought about inviting Obama into his home, but, he told me with a brown-toothed smile, a former businessman living in a storm drain probably isn’t the kind of story the president wants to promote right now.

This week, in advance of the caucus, the Republican presidential candidates are parachuting into the Silver State. It’s time for a road trip to Southern California or Northern Arizona. Seriously, I have no interest in what Mitt Romney, Ron Paul, Newt Gingrich, or Rick Santorum has to say. I wouldn’t trust any of them to run the local pawnshop-and the Old Man, Rick, Corey, and Chumlee are doing a damn fine job anyway.

Well, folks, I’m rambling. That’s what happens when you’re homesick and haven’t written a letter in more than 14 years. I should unchain myself from this desk and take advantage of the sunny, 70-degree weather. Just wanted to let you know that I’m well and, while I miss you, I have few regrets about moving to Nevada. The media onslaught over the next few days won’t even scratch the dusty surface of this complex, resilient state.

Matthew O’Brien is author of Beneath the Neon: Life and Death in the Tunnels of Las Vegas and My Week at the Blue Angel: And Other Stories from the Storm Drains, Strip Clubs, and Trailer Parks of Las Vegas. He’s also founder of Shine a Light, a community project that provides housing, drug counseling, and other services to the people who live in the storm drains. For more information on Matt and his work, visit www.beneaththeneon.com.