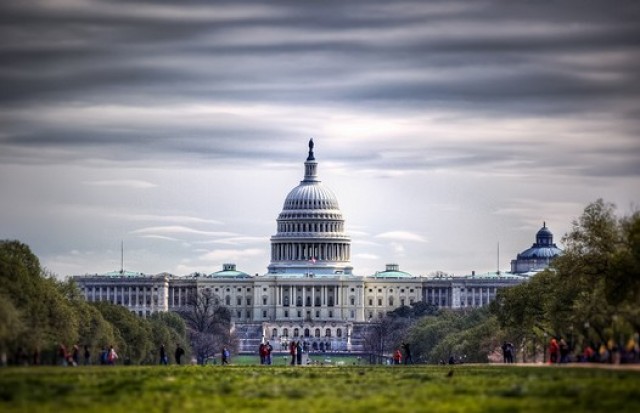 Exactly one year ago, I was packing my suitcases to move from my childhood home in north Texas to a three-bedroom group house in Washington, D.C. My mother, standing close by to inspect my work, hooked the shoulder of a blue dress on her index finger and raised her eyebrows. “Don’t forget,” she said, “what happened to Monica,” drawing out the name for effect.

Ignoring the implicit attack on my character, I pointed out a crucial difference between Ms. Lewinsky and me: “I’m going to work for a non-profit, Mom.” Later that afternoon, my father–ever the comedian–called out to me from behind the TSA security line at DFW Airport, “Don’t spend all the taxpayers’ money!”

To my parents, Washington is populated not by young idealists but rather by those eager to consort with sex-crazed lawmakers and to squander dad’s paycheck.

It’s hard to blame them for feeling their daughter has gone to the dark side. Just look at how presidential candidates talk about our nation’s capital. You’d think the job they’re seeking requires them to take up residence in the Death Star itself (if only to blow it up). When I ask friends living elsewhere for the first word that comes to mind when told “Washington, D.C.,” common responses include corruption, greed, inefficiency, scandal, and deadlock. A January 2012 Washington Post-ABC survey found that fully 84 percent of Americans disapprove of the way Congress is doing its job. Another poll revealed that nearly nine in ten Americans believe “people in Washington are out of touch with the rest of the country.”

Anthony Wiener’s tweeting escapades, the revisiting of Newt Gingrich’s “patriotic” adultery (mistakes were made because he was so busy serving the country, he’s acknowledged), and revelations that John F. Kennedy felt entitled to summon an attractive intern as if ordering room service, haven’t helped alter my friends and family’s impressions of my chosen home.

So why am I here? If Washington bears any resemblance to its reputation, what is any one of us doing here–the throngs of summer interns, the fresh-faced graduates, and the optimistic, upwardly mobile young professionals?

Actually, working in D.C. is empowering–exhilarating, even. Dodgy Washington, the city mocked by Tea Partiers and comedians alike, is a place of closed doors–fabled smoke-filled (now smoke-free) rooms, K Street offices, and secret hideaways. But what struck me from the outset was how open and accessible Washington can be.

On my second day of work for an association of state policymakers, I was asked to attend a congressional hearing, a rite of passage for legions of young Washingtonians.

In a freshly dry-cleaned suit and patent-leather pumps, I navigated my way to the Cannon House building using no less than one Google map, one color-coded diagram of the Capitol complex, and the help of a Capitol Police officer. Before crossing the threshold, I pulled out my driver’s license and a sticky note on which I’d jotted the hearing details. I prepared to identify myself and state my business, but no one asked me a single question. Then, expecting a congressional building to be at least as secure as National Airport, I ditched my water bottle and removed my jacket and belt to be x-rayed. A uniformed guard waved me through the metal detector with a noticeable eye roll and whispered simply, “Put your clothes on, honey.”

I found my way from the impressive yellow rotunda to a wood-paneled hearing room where the Department of Agriculture’s Deputy Secretary and a firing line of policymakers debated food stamp fraud. It turns out that, should you feel inclined to watch federal agencies, activists, corporations, non-profits, and lawmakers duke it out in person, you’re perfectly free to do so–with your jacket on and your ID tucked safely away in your wallet.

True, laws are often crafted behind closed doors–but not that closed. As a 23-year-old researcher and advocate for anti-hunger and poverty alleviation measures, I was pleasantly surprised to be able to meet with senior congressional staffers and brief them on our group’s agenda.

Even government research agencies–staffed by those “federal workers” people often sneer at–are impressively helpful. For one work assignment, I called the Library of Congress’ Veterans’ History Project, and a cheery specialist ran an internal search of more than 70,000 collections, whittled down the results, and e-mailed me a beautiful spreadsheet of her findings. We even met in person the following week to narrow our query. I’ve found researchers at the Bureau of Labor Statistics and the National Science Foundation to be similarly responsive to questions. In a pinch, it’s not hard to get a patient, knowledgeable data specialist from the U.S. Census Bureau on the phone. Far from the caricatures of overpaid, do–nothing bureaucrats, the federal employees answering my questions have proven smart, dedicated, and clearly deserving of their GS pay, which is often far less than what they would earn in the private sector.

I now work at a nonpartisan think tank, assisting fellows with their research projects. It’s a step removed from the frontlines of government work but still part of the same ecosystem that values and nurtures young voices. I do plenty of grunt work, sure, but my actual opinion is often solicited and heard. I’m surrounded by people who are concerned about the world and what’s happening. Water-cooler talk is as likely to center around the most recent New Yorker cover story as a sports game. The role of social media in the Arab Spring, the challenge of growing food on a warming planet, and the changing role of the U.S. military are typical subjects of conversation. Money rarely is.

Washington’s open culture extends into the extra-curricular. The Smithsonian and other museums, think tanks, and even foreign embassies offer countless free exhibits and talks. The Library of Congress, the world’s largest library, provides access to more than 147 million catalogued items. The Kennedy Center offers free daily performances for those willing to take a shuttle bus from the Metro. The District is one big campus for adults.

As the presidential election heats up and gridlock grinds on, I realize Washington’s reputation won’t improve any time soon. But don’t let bickering congressmen and talking heads on TV fool you. They aren’t the only ones representing the rest of the country here in the nation’s capital. So are a lot of young people, who are still awestruck by the Supreme Court and Capitol building, which gleam like wedding cakes in the sun. We, too, represent the folks back home. And I think mom and dad are starting to see that.

Marie Lawrence is a researcher at the New America Foundation.