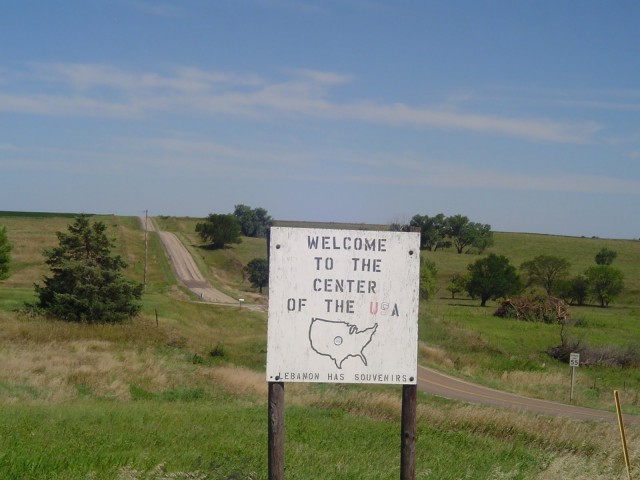 We hear so much about presidential candidates–and so little about life in the states that elect them. In “Beyond the Circus,” writers take us off the trail and give us glimpses of politically important places. Today, Kansas.

To most Americans, Kansas is a state experienced in transit: flown over or traversed without stopping. But it’s also a fabled place of internal struggle, where John Brown helped start the Civil War, and where warring ideologies continue today (we haven’t elected a Republican or Democrat governor twice in a row since 1965). In spite, or maybe because, of these conflicts, it’s become the nation’s metaphor for the authentic American experience.

I grew up in the capital city, Topeka (T-town to the natives). I attended elementary, junior high, high school, and college all within a 25-minute drive (22 minutes for my mom) from my childhood home, where distance is measured by speed–your personal best in minutes, not miles. Topeka is where I watched the culture wars play out in my backyard, from the antics of the Westboro Baptist Church and founder Fred Phelps, who is known for his extreme hostility toward homosexuality, to the State Board of Education’s decision not to require teaching evolution in the classroom (grossly twisted into the headline “Kansas Bans Teaching Evolution”).

Topeka in the early ’90s was a city of controversy–Monday through Saturday, that is. Most of the population agreed that Sunday was sacred. Nearly 90 percent of Kansans are practicing Christians, almost a third of whom are Roman Catholics, like half my family. Divorce may have been shunned, but my parents, who split up when I was seven, were in good company: 1990 marked the highest number of filed divorces the state has ever seen.

I spent a significant portion of my childhood going to mass or learning scripture in the parochial school’s basement during CCD (Confraternity of Christian Doctrine–aka Sunday school for the public school kids). Religion provided a sense of consistency in the unpredictable times and was the mechanism for inviting new people into your life. When someone asked you to church, it was like they were asking you to coffee. Churches were the diners and coffee shops of larger cities, and they were vibrant every Sunday morning.

I moved east for graduate school–just 30 minutes, but it felt like more. Lawrence, Kansas, home of the University of Kansas and its fictional mascot (the Jayhawk), is a splash of blue in a sea of red, a haven for creative types and dreamers. But my dream was to live in the Big Apple, not the Little Apple an hour west. So I headed to New York City. Neither a visitor nor a native, I became the typical New Yorker: I surrounded myself with like-minded individuals, spent summers in the park and winters in the museums, and relished giving tourists directions on the subway. But I also found myself becoming closer to Kansas.

The summer of my arrival in New York, Thomas Frank’s New York Times bestseller, What’s the Matter with Kansas?, topped every must-read list and stared back at me from every bookstore display window. Without election, I became Kansas’s unofficial spokesperson within my circle of new acquaintances. Hastily, I read the book and finally learned some of my state’s history.

And so, after just a week in “The City,” I became “Joe Kansas”–or, as I thought of myself, a reborn-again Kansan. I read every book on Kansas’s history. I took on any quip or question about Kansas that came my way (and there were a lot). The old adage “absence makes the heart grow fonder” could not have been more apt. The question “Where are you from?” could send me into an impromptu oration on The Sunflower State’s history: “Kansas’s motto, Ad astra per aspera, ‘through hardships to the stars,’ describes the state perfectly …”

From there I’d explain the origin of the nickname “Bleeding Kansas” (a border war with Missouri over slavery in the 1850s), offer the story of John Ritchie’s Underground Railroad station, and explain the roots of the Monroe School–the center of Brown v. Board of Education.

I fought preemptively against the assumption that I was suffering from culture shock in the Big City–and the implied apology for my home state’s lack of diversity and culture:

Kansas is home to many who made a “first” happen. My fellow Topeka native Charles Curtis was the first recognized Native American to be vice president, under Herbert Hoover. In 1940 Hattie McDaniel (from Wichita) received an Academy Award for her role as Mammy in Gone with the Wind, making her the first black person ever to win. Amelia Earhart was from Atchison. And yes, we have opera, classical music, and Picasso there, too.

I’m not embarrassed to admit that, when I felt it was necessary, I also offered up Cawker City (pronounced the way it is spelled), home to the World’s Largest Ball of Twine. The sign at city limits reads, “Welcome to Cawker City: We Have One Big Ball.”

More often than not, my diatribe was greeted by silence, or, worse, a dreaded reference to the first film credited to be in color–The Wizard of Oz. It sometimes felt as though every New Yorker, and every transplanted New Yorker from anywhere else, had been waiting his whole life to grace an actual Kansan’s ears with the infamous quote.

I wasn’t there any longer. And five years after moving to “The City,” I began to feel like a fish in an ocean full of many that were just like me. Not exactly what a creative type ever wants to admit. I wanted more. I needed more.

I knew New York was not the center of the universe, or even the country. Kansas is both the geodetic center of North America and the geographical center of the contiguous United States.

Back in the middle, the lost Transatlantic Ocean, I could be the fish in the pond. I may have poked fun at our state slogan when it was changed in the late ’90s, but “Kansas, As Big As You Think” called to me. I was going home–but I wasn’t going to click my heels to get there.

Salina (pronounced “Sah-lie-naw”) is two hours from my hometown, in the center of the state, where the Flint Hills end and the Great Central Plains begin. Unlike New Yorkers who proudly claim “The City,” Salinans are not quite sure what Salina is or has to offer. The town’s unknown potential hooked me. The possibilities of what I could do and build there would be limited only by my ambition.

Salina is a typical Kansas town in a lot of ways, with a city plan that’s almost identical to those of Topeka and Lawrence: Art Deco architecture in the historic downtown located in the north, the Smoky Hill River winding through the eastern quadrant, and a commercial sprawl of chainsstores and a mall on the southwest border. With a population just over 47,000 it’s not large enough to be a city, but too big to be a town. Smack dab in the middle, literally and figuratively.

The climate varies as much as the topography. Just this week we’ve seen highs in the 70s and lows in the 20s, snow one hour and sunny skies the next, and 60 mph winds. A tornado watch is looming even as I write now: twister season is just around the corner.

The hot topic when I first settled in was whether or not Salina needed a Starbucks. Affirmative and negative teams were formed (this is the land of debate and forensics), and heated arguments about capitalism pursued. The verdict is still out, but I’ve heard rumors that next fall there will be one at the gas station out by the highway: out of sight for the residents, yet accessible to the transients.

I’m not a fan of burnt coffee, and besides, I much prefer Ad Astra, the corner bookstore/coffee shop hybrid where I’m working now. Here a guy wearing shit kickers and spurs leans over, as the tornado alarm sounds, to say, “Maybe next time,” and the music of Melissa Etheridge (who, I’ve just learned, is from Leavenworth) plays over the speakers. Down the street are several more independent shops like this. There’s the newly renovated Stiefel Theatre where I get my performance fix (Garrison Keillor and the Wichita Grand Opera next month) and an independent cinema that’s showing The Artist now and A Separation next (mind you I select the films, so I’m creating part of this cultural ferment).

When I first moved to Salina, I was often asked, “Where did you come from?” When I answered “New York City,” the follow-up was inevitable: “So, why did you move here?” And so, once again, I have become Joe Kansas, the Free State’s number-one cheerleader, responsible for educating my fellow Kansans on the history they either forgot, never were taught, or just don’t think is worth being proud of.

Here, my recitations (“Your fellow Kansans–the stars behind Ethel Mertz, Mr. Grant, Rebecca Howe, Cam Tucker–have been on TV since the beginning of the modern sitcom!”) are greeted not with quotes from The Wizard of Oz, but nods of agreement, and another question: “So, where are you from?” This time, I reply, “Kansas,” and more often than not, we look to the stars and sigh.

Joseph Keehn II is an artist, and pays his debt by performing as the Curator of Public Programs for the Salina Art Center. He is co-editor of and contributor to Rethinking Contemporary Art and Multicultural Education, a resource text for teachers and art enthusiasts, and executive producer for The Orange Party, a traveling tent show created by and for the community in which it temporarily resides.

*Photo courtesy of the people of Lebanon, Kansas.