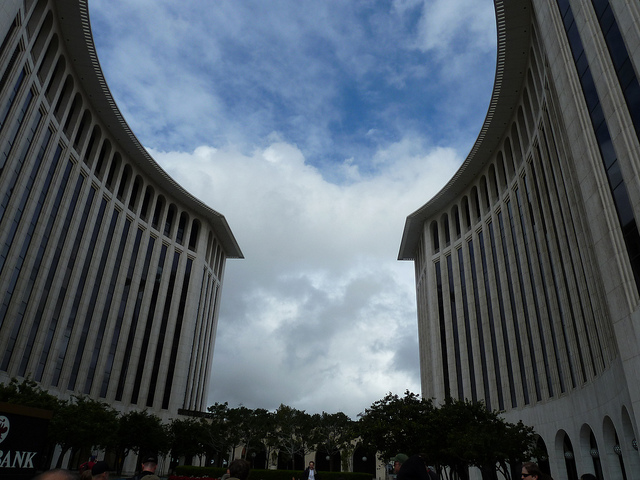 After doing his duty for the Navy in Washington D.C. during World War II, my father returned to Los Angeles, and my parents moved into the Talmadge Apartments between Western and Vermont. They’d been married for 17 years without having any children. So my father informally adopted his two nephews.

Around 1949, those nephews, who were students at UCLA, threw a party at the apartment. It was apparently a night to remember. The management decided to not renew my father’s lease. Shortly after that, my father’s wife announced, after nearly two decades of a childless marriage, that she was with child. (Full disclosure: that child was none other than this writer.)

So my dad leased a house facing the Wilshire Country Club in Hancock Park. Then, in 1959, he formed a corporation to buy a nearby Tudor house, hire domestics, and rent the house back to him with domestic services. This was the man who founded the largest savings and loan in America, who in those years probably enabled more Californians to become homeowners than anyone else. But he was technically a renter all his life. Those were the days of the 70-percent and 90-percent top tax brackets, and byzantine legal structures were common.

In mid-century Los Angeles, anything on Wilshire Boulevard was considered more prestigious than anything on the side streets. On the eastern end near Lafayette Park was the Bullocks Wilshire department store. Several miles west were the Miracle Mile department stores, which had beautiful shop windows facing the boulevard, even though most people entered the stores through portes-cochères in the rear. Many of the major liberal establishment churches–the PCUSA, the United Methodists, St. Basil’s Cathedral, and the Wilshire Boulevard Temple, Rabbi Magnin’s huge reform synagogue–lined the street. The Ambassador Hotel was one of the great hotels of the city. And then there was The Brown Derby Restaurant, which gave us the Cobb Salad.

My father was originally from Omaha, Nebraska, but he moved west, graduating from the University of Southern California in 1927 and emerging from the Great Depression as a successful insurance underwriter. During the war, he heard talk among the military that Southern California was going to take off, so he bought a one-branch thrift downtown called Home Savings and Loan. Soon, it grew to be a multi-branched empire in four counties: Los Angeles, Orange, San Bernardino, and Riverside.

Partly to get involved in philanthropy and partly to set up an estate plan, my father set up The Ahmanson Foundation. The idea was that The Ahmanson Foundation, after my father’s death, would inherit and control the for-profit companies. This was a common legal arrangement at the time, offering a way for wealthy families to preserve more of the family fortune. (I recommend the novel God Bless You, Mr. Rosewater, by Kurt Vonnegut, for a sense of how it worked.)

Apparently, my father wasn’t a full member of the downtown establishment, for he chose to base his business several miles west of the establishment thoroughfares of Flower and Figueroa. He recruited the artist Millard Sheets to design for him a corporate headquarters on the north side of Wilshire Boulevard, between Serrano and Oxford Streets, in the early 1950s. Then he conceived of a fancier project for that site and hired Edward Durell Stone to design it. A model of it was in our house during my later high school years. It featured two buildings next to each other, with concave faces toward a courtyard. A third, taller building was to stand in back. But that part was never built.

My father died suddenly on June 17, 1968, before ground was broken on the project. Fifteen months later, the U. S. Congress passed, and President Nixon signed, a bill called the Tax Reform Act of 1969. It rendered my father’s estate plan obsolete, for a non-profit foundation could no longer own a controlling interest in a for-profit corporation. Instead of remaining under the control of the The Ahmanson Foundation, Home Savings of America would have to go public. In the meantime, my father’s nephew Robert Ahmanson wound up overseeing construction on the pair of buildings. They were finished in 1973.

The interest rate spike of the early ’80s was hard on Home Savings of America, and they sold off the Ahmanson Center on Wilshire at that time. Still, Home Savings coasted through the savings and loan crisis of the end of the ’80s, thanks to maintaining the conservative policies that my father had instituted.

The area changed a lot in these years. After the Watts Riots of 1965, and in the 10 or 15 years after that, the upper and upper-middle classes of Pasadena, San Marino, Arcadia, and Hancock Park relocated en masse to the Newport Beach area in what I call the secessio patriciorum, or the secession of the patricians. Los Angeles Magazine featured an article in 1977 called “The Ripening of Orange County: Is It Stealing the L.A. Dream?” Indeed, a lot of the life seemed to get sucked out of Los Angeles at that time. One consequence of the secessio was that finance and retail and new construction tended to concentrate either downtown or west of central Beverly Hills. That left the Wilshire corridor in between down at the heels.

Later, that part of Wilshire recovered and reinvented itself. New immigrants from Korea and Latin American countries moved in, and, for many years, such gentrification as took place in the area was done by these immigrants and not so much by white Anglos. After 1990, previously uncool areas like Pasadena, Santa Monica, and parts of downtown began to recover, and the Wilshire district became the heart of Koreatown. I now think of Los Angeles as being similar to San Francisco and Oakland. The West Side up to Hancock Park is like San Francisco, while the parts east of it are like Oakland and the East Bay. London and Berlin have the same sort of east-west-ness.

Koreatown is a wonderful neighborhood, and the Ahmanson Center is still beautiful. But I can’t help feeling a touch of melancholy that my dad’s vision was never fulfilled. He’d hoped to make that part of Wilshire Boulevard one of the great financial and retail corridors of America. Today, the big players are concentrated downtown or in Beverly Hills and westward.

If you walk up the Oxford Street side of the Ahmanson Center, you can see a travertine block with a Latin inscription. Translated, it says, “Robertus and Mauritius, two virtuous men, dedicate this stone to themselves.” Robertus is Robert Ahmanson, who supervised the construction of the center. Mauritius is Maurizio Bufalini, owner of a marble quarry in Carrara, Italy. Bufalini was a good friend of our family, and he provided the Italian and Greek marble that decorates the center. Both these men are “late,” as they say in Botswana English, meaning dead. The stone is dusty now, but the words can still be read. I wonder if anybody notices it, or wonders what it means.

Howard Ahmanson Jr. is a blogger and philanthropist from Orange County.