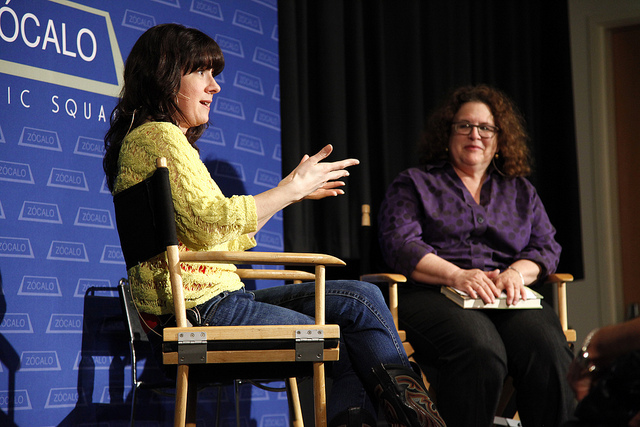 Journalist Tracie McMillan’s year-long journey through the most menial jobs in the American food system–picking grapes and garlic in California fields, stocking a Wal-Mart produce section outside Detroit, and working the line at Applebee’s in Brooklyn–began with a rant. She wanted to write about how “stupid foodies are really irritating, and I really think we should talk about food for normal people.”

Evan Kleiman, host of KCRW’s Good Food, who was interviewing McMillan in front of a full house at the Goethe Institut Los Angeles, called McMillan’s new book, The American Way of Eating, “the anti-foodie book–it’s flipped on its head.” What was it like, she asked McMillan, to earn minimum wage in different parts of the country–and how were she and her co-workers eating on this salary? 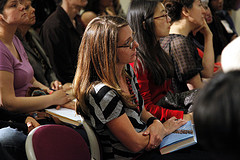 In the fields, McMillan didn’t even make minimum wage; her first day picking garlic she received $16 for a full day’s work. Even experienced pickers would make at most under $50 a day for picking 30 buckets worth of garlic; to make minimum wage, they’d have to pick at least 40 buckets–an impossible number. To get around this, workers’ pay stubs don’t reflect the true number of hours they work but rather the number of hours they would have worked if they were making minimum wage. The people she worked with in the fields couldn’t even afford fast food, said McMillan. She was boarding with a family and eating rice, beans, and tortillas from scratch along with everyone else in the house. She was happy with her meals–until she realized that the person in the kitchen was the family’s 14-year-old daughter, who was cooking instead of attending school.

Kleiman asked if the workers had heard “the messages from on high” about how they were supposed to be eating.

People know fruits and vegetables are good, explained McMillan, who saw how much her fellow farmworkers prized the produce they received from a local food bank. “People grasp basic nutrition information,” she said, “but figuring out ways to operationalize that in their daily lives is really tricky.” She explained that cheap and easy is the best a lot of people can do, from the pickers in the fields to employees at Wal-Mart and Applebee’s. “It’s not necessarily about telling people to eat their vegetables,” she said. “It’s about asking, how do we make it easy for folks to eat well?”

It’s a complicated question. In urban areas, poor eating habits have been attributed to “food deserts” where grocery stores are beyond a certain radius. But recent studies, said Kleiman, have refuted this theory. “The idea of supermarkets fixing everything has always been crude and flawed,” said McMillan; the produce at the Wal-Mart she worked at, for example, was terrible. It’s not simply an issue of access but also one of time and effort. 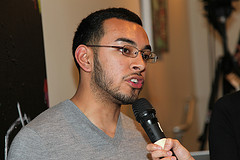 “What intrigues me is this idea that it’s easy to cook,” said Kleiman. Cooking is only easy when you have the skills and the time for it–which McMillan and her fellow low-income co-workers did not. At issue is a cultural change rather than simply a change in education and access.

“Food isn’t really the problem here,” said McMillan. “People actually like and enjoy good food when they have access to it.” Better eating doesn’t just happen because people decide to respect the farmer and the land and the environment. Instead, she argued, it’s about making the same social and economic commitment to getting people good food that we make to getting them clean water.

In the question and answer session, Kleiman suggested that systemic change needed to come from the government rather than corporations or even education. “So much that appears to be free choice when we walk into a store has already been chosen by someone else,” she said.

“People eat crappy diets because we’ve made it really easy and cheap to do,” said McMillan. And although people believe that fresh food is less expensive–and it is, when you weigh 10 pounds of potato chips and 10 pounds of raw potatoes-the calculation isn’t that simple. Her co-worker at Wal-Mart would have a bag of chips and a 2-liter bottle of Mountain Dew for lunch; it cost him $2, and filled him up more than an apple–which would be cheaper but also probably out of season. “People gauge time and convenience and flavor along with cost,” she said. 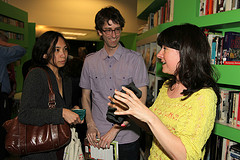 In Southern California, we’re lucky to have farmers markets and access to fresh, local produce year-round, said Kleiman–but that’s not the reality for most of the country. McMillan noted that less than 2 percent of Americans shop at farmers markets.

Supermarkets have traditionally resisted going into urban neighborhoods. Grocery stores gauge potential success based on a suburban model–the median income of an area. But in cities, a neighborhood with a lower median income is more densely populated than a suburb. Supermarket executives have also gone into lower income areas and tried to explain their absence with the idea that a particular population isn’t “our customers.” This is like saying, “People in the suburbs like to eat a rich and varied diet,” but the rest of us don’t, said McMillan. “It’s kind of messed up.”

Will it ever be possible for the entire nation to eat organic, sustainable, and local? McMillan admitted that she couldn’t give a yes or no answer, but she noted that almost 90 percent of food grown in the U.S. is not for humans to consume. And right now we grow only half the amount of fruits and vegetables we’d need for the entire nation to eat the recommended balance.

Southern California remains a bit of a bubble compared to places like Detroit–or even New York, said Kleiman. “In New York when I order a salad in winter, I’m shocked,” no matter what type of restaurant I go to, she said. “It’s a part of our culture here, and I don’t think we appreciate it enough.” 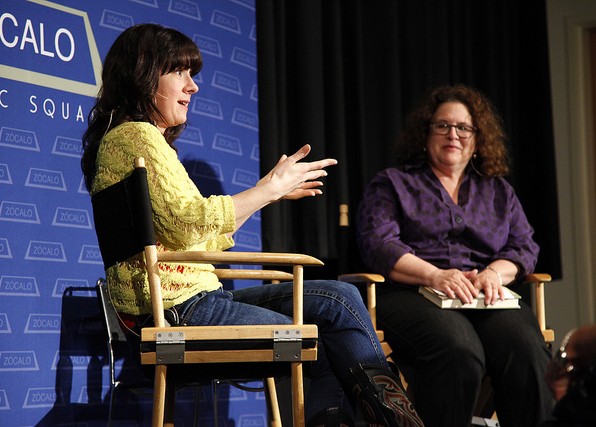