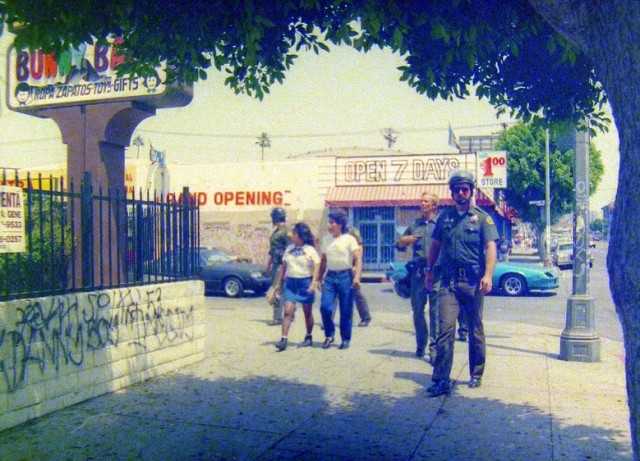 Certain human calamities are so all-encompassing, so shocking to the senses, that they become impossible to contain within a neat narrative. Think 9/11, or Hurricane Katrina, or the federal siege of the Branch Davidian ranch in Waco, Texas. Too many social and governing pathologies chase too few mechanisms for coping, and before you know it a thousand fanciful explanations bloom.

People across Southern California and the nation have spent the past weeks engaged in appropriately somber reflection on the 20th anniversary of the Los Angeles riots, a catastrophe I experienced as a dislocated expatriate anxiously watching CNN International and hearing loved ones back in Long Beach describe the Bosch-style view from their rooftops. As always happens when the riots have come up since then, the subtext this season has been “Could it happen again?” But in the struggle to answer that question and make sense of those murderous, soul-draining events of two decades ago, too many commentators have lost the plot.

Was “the root of the unrest … economic,” and therefore eternally susceptible to relapse? That’s what the interesting writer Erin Aubry Kaplan posited in the L.A. Times. And yet violent crime, both locally and nationwide, has continued to go down even during the last four years of recession. The New York Times produced some ambivalent handwringing about South L.A.’s changing demographics, as if the ideal of any big city (let alone one as dynamic as Los Angeles), is to preserve ethnic and nationality percentages in amber. And L.A. Times columnist Sandy Banks even made the startling claim that destroying 200 liquor stores might well have been a good thing on balance.

There are scores of worthwhile policy and social discussions embedded in those assertions, but they are secondary to the fundamental cause of the riots that has changed fundamentally: African-American communities in Southern California are no longer policed by what they rationally suspected to be a racist and casually brutal occupying army of mostly white men from faraway suburbs. The L.A. County of my childhood is no more, and unlike political nostalgics from Kevin Starr to Tom McClintock, I say good riddance to most of that.

I grew up in the seemingly idyllic, middle class Levittown of north Long Beach, near Lakewood. Our block was alive with the constant clatter of kids playing Wiffle ball and navigating wooden skateboards. Everyone’s dad could get a good job down the street at McDonnell Douglas. You didn’t have to squint very hard to see similarities with the good suburban vibrations of The Brady Bunch or The Partridge Family. And, like those shows, our neighborhood’s cast was almost exclusively white. Therein lay some of the inevitable noir behind the sunshine.

I will never forget the rude shock to my naive, Roots-loving ears when one of the oldest kids on the block bragged to us about his new job as a cop. One of the awesome things about police work, he told us, was that when you hauled a nigger into the station, you and the boys could just take him out back and beat holy hell out of him. Because who were people gonna believe–the cops, or the nigger!

There is no relationship in citizenship more elemental than that between the resident and the cop. With the rare (though sadly not rare enough) license to kill in the name of peace, government, and the greater good, local police forces make thousands of unreviewable judgment calls every day, almost all of which are freighted with an awesome asymmetry of power (occasionally in the opposite direction). It’s a difficult, dangerous, and often thankless job, which is why every good officer deserves our strong respect.

But power does corrupt, especially where the asymmetries are strongest. With a police force that in the early 1990s was 61 percent white and reportedly 83 percent comprised of people who lived outside city limits, and a longtime chief (Daryl Gates) who pioneered odious paramilitary tactics while mouthing arguably racist statements (such as “blacks might be more likely to die from chokeholds because their arteries do not open as fast as they do on normal people”), the Los Angeles Police Department came to treat the disproportionately violent black neighborhoods south of USC not unlike U.S. soldiers now approach Kandahar.

It’s hard to describe to white people not from Southern California why it’s perfectly plausible that O.J. Simpson was found not guilty of murdering Nicole Simpson. All you need to consider is a backstory that included LAPD Det. Mark Fuhrman’s past statements like, “Yeah we work with niggers and gangs. You can take one of these niggers, drag ’em into the alley and beat the shit out of them and kick them. You can see them twitch. It really relieves your tension.” My dad, no soft-on-crime liberal, always understood the verdict as the fruits of decades’ worth of reasonable doubt sewn by California’s all-too-frequently racist police force.

I was 12 years old when a local football star named Ron Settles, a 21-year-old senior tailback at Long Beach State, died of hanging in his Signal Hill jail cell less than five miles from our house. He was black, had been pulled over for speeding, and savagely beaten. The cops claimed it was suicide, but a coroner’s inquest ruled that Settles’ death came “at the hands of another“; an independent autopsy a year later found that the injuries were much more consistent with police chokeholds, and the Signal Hill Police Department ended up paying the Settles family more than $1 million. No cops were ever charged. The case was locally famous, but seemingly every Southern California community with a significant black population could tell similar stories in the 1970s and ’80s.

The past indeed is a different planet, thank God. I haven’t heard any white person, let alone a police officer, seriously use the word nigger since the early 1990s. The LAPD is now 36 percent white (as of last August), and former antagonists like the Urban League’s John Mack say things like “It’s been an amazing transformation … The L.A.P.D. of today is very, very different than 10, 12 years ago, when I was one of the people who was constantly battling them.” An L.A. Times poll in 2009 found that 77 percent of residents “approved” of the LAPD’s job, including an amazing (given the history) 68 percent of blacks.

Violent crime, which seemed to be on an irreversible trend upward for the three decades before the riots, creating deep and seemingly permanent political divides, suddenly started nose-diving almost immediately afterward. The way we talk about crime–the recent Trayvon Martin case notwithstanding–is almost unrecognizably different, too. It is impossible to imagine in 2012 a political atmosphere in which any commentator, let alone a professed libertarian (as am I), would respond to something as horrific as the videotaped gang-stomping of Rodney King by advocating that police issue extra-judicial beatings of “street criminals” and joking that maybe video cameras should be banned. In fact, some of the same voices who were fanning the racial flames 20 years ago are now among the first to register proper outrage at police militarization and what has come to be known as “the war on cameras.”

Much of these changes for the better have come from the messy, deeply flawed, but heartfelt work of L.A.’s law enforcement and political cultures. Recently departed police chief William Bratton may end up with most of the accolades, but his imperfect predecessors Bernard Parks and Willie Williams also helped turn around an organization whose faults had been the stuff of legend since long before Daryl Gates started mugging for cameras. Though few if any sane people believe we are living in a post-racial nirvana, especially in the poorer neighborhoods of our bigger cities, a raw and violent open-air conflict has been talked back down to DefCon 5.

What might deserve even more credit is the source that almost never gets it: Society, or the rest of us. Consider that during the Watts riots of 1965, interracial marriage was still illegal in some states, and during the 1992 riots, still fewer than half of Americans approved of it. Today that number is 86 percent. Twenty years ago, Washington intellectuals were expending much oxygen linking racial differences to IQ; today, those people are more likely to be talking about class instead of race. It is much more difficult in pluralistic, cross-pollinating America than it was even two decades ago to consign a whole category of people into a dehumanized “other.”

None of this leaves us in a particularly great place. One should hope, at a bare minimum, that conditions are good enough to forestall a three-day nightmare of violence, vandalism, looting, and self-destruction. We may be better as a society in not tolerating racism, but we remain far too tolerant of an unconscionable drug war that overwhelmingly hits minority and black populations harder even though they are no more likely to, say, smoke marijuana than anybody else. There is a permanent underclass of millions of Americans, and the families they can’t support, who are in some way under the supervision of the judicial system. Crime is way down, but militarized policing is way up, jeopardizing the lives of uncounted innocents who happen to be in the wrong place at the wrong time. And too many politicians and activists who are addressing the inaccurate “root cause” of economic distress have chosen new prohibitions–of fast food restaurants, Wal-Marts, liquor stores–as a doomed attempt to zone South L.A.’s way out of its perennial recession.

But in a year when so much political discourse is likely to be poisoned, it’s heartening to know that the biggest toxin near the corner of Florence and Normandie 20 years ago has largely been drained. Now comes the hard part.

Matt Welch is editor-in-chief of Reason magazine and co-author (with Nick Gillespie) of The Declaration of Independents: How Libertarian Politics Can Fix What’s Wrong With America (Public Affairs).