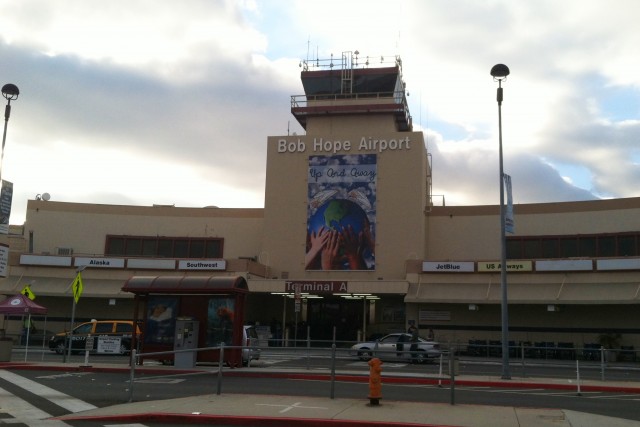 For most of my life, I’ve lived within driving distance of everyone I loved, and worked in jobs that didn’t require much travel. Plane trips were for vacations, and happened only once or twice a year. But when my boyfriend, Dan, moved to Los Angeles, and I stayed behind in New York, cross-country flights became a monthly ritual–and airports suddenly became important. I was amazed by the convenience of my first wheeled carry-on bag and marveled at the way the redeye maximized my visits. But the most enduring affair of the year we spent 3,000 miles apart (besides my relationship with Dan) is my love for Burbank’s Bob Hope Airport.

Is “love” too strong a word to use for an airport–especially for this somewhat dinky secondary (tertiary?) gateway? It’s true that the Bob Hope Airport is small and outdated; in January, American Airlines pulled out, leaving it strapped for cash. When you think of L.A., you think of LAX, even if it is an immense modernist nightmare.

Bob Hope is charmingly retro in its human scale, starting with the way you board planes by walking out onto the tarmac and up the front or rear stairs. To fly here from JFK’s state-of-the-art and cavernous Terminal 5, with its shiny sushi bar and touch-screen monitors for ordering pre-flight meals, is like flying back in time. You can walk the length of the two compact terminals in a matter of minutes. The security lines move fast, and the TSA staff seem friendlier than elsewhere (you half expect them to remember your name from the last time). So, yes, I have come to love this cozy airport named after a comedian that’s an astonishingly short drive up the 5 from Los Feliz, where Dan and I are now living.

Although the curb at the Bob Hope Airport was the site of a few teary goodbyes when I used to fly back to New York, it was also where we found each other again every time I visited. It’s hard to make a connection, or to talk about the things that really matter, even with someone you love, when you’re not face-to-face. For weeks or months, we’d conduct our relationship over the phone–between meetings for me and classes for him–in a way that felt almost desultory. Even after my flight would land, with only a few hundred yards between us, there was something that didn’t feel real about our being together. We’d talk on our cell phones as I walked through the terminal, updating each other on our progress (“Now I’m three minutes away”; “I’m circling again …”)–and then I’d be outside, and I’d see him, or he’d see me, and with one big stupid smile I’d know we were OK. What matters most at Bob Hope isn’t any hulking antiseptic infrastructure but the people.

Now that I’m living and working in L.A., trips to and from the Bob Hope Airport usually mean I’m traveling on business. I still relish the ease of it all. I’m consistently shocked by how quickly I can make it from our apartment to the airport, park, and be at the gate. Even as I’m taking off my shoes and getting out my liquids, I chat up security as I breeze through the screening; at least twice, I’ve been asked about where I got my styling cream, and how I like it. In Burbank, I am that rare, satisfied, even cheerful airport traveler.

And now, like Dan before me, I get to come to Bob Hope to pick up and reconnect with other people I love. When my two best friends flew in for a weekend in January, the traffic cop almost ticketed them for jumping into my car before I reached the loading zone. We begged forgiveness, tripping over each other to explain how long we’d spent apart, before she let me off with a warning.

But to be honest, I wouldn’t have cared if I had been given a ticket. My friends had traveled across a continent, I was the destination, and the Bob Hope Airport had once again made it easier than one would believe it could possibly be, in this big, sprawling city, for us to find one another.