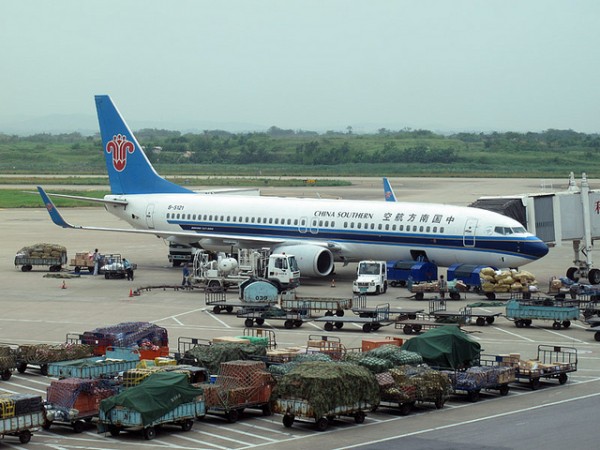 If you spend billions on developing planes, you’ll probably wind up with some planes. You might even find yourself playing a major role in aerospace. China has proven itself capable of producing regional jets, and now its aerospace industry is aiming for something larger. In advance of the Zócalo event “Will China Rule the Skies?,” several observers of the aerospace industry share their thoughts on what this portends. Given how well everything else is going for China, should Boeing be frightened?

Yes, if Comac can sell stuff outside of China

With industry analysts predicting that China will need up to 5,000 new aircraft by 2030 to satisfy its citizens’ increasing taste for air travel, the Chinese government would obviously like to see a good portion of those planes produced domestically by the state-owned Commercial Aircraft Corporation of China (Comac).

Comac has demonstrated its ability to design and fly the 70-to-105-seat AR-J21 regional jet series, and it has lined up Chengdu airlines to begin flying the aircraft this year, but many questions remain as to whether larger proposed designs will be able to be completed within projected timelines. The next proposed Comac aircraft is the C-919, an 168-to-190-seat aircraft that is intended to compete with the Boeing 737 and the Airbus A320.

The largest challenge to Comac aircraft will be to appeal beyond the Chinese domestic market. While some fear that means direct competition for U.S. and European airline customers, the most likely success for Cormac will come from supplying developing air-travel markets with cheaper aircraft, especially in other BRICS countries like Brazil, India and South Africa. If the planes China makes for carriers in these countries perform well, Comac will be established as a global player in the aerospace industry.

Alan Haburchak is the multimedia editor for Caixin Online, the English-language portal of one of China’s leading business and economics media outlets.

Not in this decade–but maybe later

As detailed in the RAND study, Ready for Takeoff: China’s Advancing Aerospace Industry, the Commercial Aircraft Corporation of China (COMAC) will probably begin producing its first large commercial aircraft later this decade. But the C919 is unlikely to be technologically or commercially competitive when it arrives. It’s also heavily dependent on foreign suppliers, such as General Electric, Honeywell, Rockwell Collins, Goodrich, and Eaton, all of which are part of the Boeing 787 supply chain.

The large commercial aircraft market currently amounts to fewer than 1,000 deliveries a year globally. This makes it difficult for more than one or two manufacturers to achieve economies of scale. There’s also competition from Brazil and Canada, where Embraer and Bombardier are seeking to expand into the large commercial aircraft market. In Japan and Russia, the aerospace industries have designs on the regional jet market as a steppingstone towards large commercial aircraft production. Lastly, as an airplane’s total operating costs over their 30-year life span well exceed their purchase price, it is difficult to convince airlines to buy less efficient airplanes, even at a discount. Even a government mandate for all four major Chinese carriers to buy the C919 exclusively (about 100 to 150 planes per year, combined) would not produce a large enough market share to be competitive with Boeing or Airbus without significant foreign sales. So COMAC is unlikely to become competitive unless either of the leaders, Boeing or Airbus, makes a serious error in the development of a future airplane.

Nevertheless, the Chinese system is subsidizing the development of the C919 to the tune of billions of dollars, and China’s aerospace industry has made impressive gains in the past decade. Even if the C919 is not commercially successful, Chinese industry will undoubtedly learn a great deal from the effort. If the Chinese Communist Party is willing to absorb such costs until Boeing or Airbus makes a mistake, then China could become a commercial threat. Not in this decade–but perhaps in the future.

Not if Boeing stays on its game

China’s aerospace industry may be a rival, even a threat, but Boeing is fully capable of meeting any challenge to its position.

That was not always the case. Until the advent of the classic 707 in 1958, Boeing was a small player in the airliner business, a distant third behind Douglas and Lockheed. The jet-powered Boeing 707 changed the market and changed the world. With its speed and efficiency, this new airliner came to dominate air travel. Douglas kept pace with its DC-8 but Lockheed fell to the wayside. Boeing followed this success over the next three decades with the 727, the 737, the 747, the 757, and the 767. Boeing was preeminent, controlling over two-thirds of the market, with Douglas (now McDonnell Douglas) controlling most of the rest.

Then, in the mid-1980s, Airbus stopped limiting itself to inexpensive “air-buses” and began building a new generation of airliners that featured the latest technologies. (Ironically, most of them had been pioneered by NASA in the United States.) The Airbus A320 became a serious competitor to the 737, and airlines the world over flocked to Airbus’s door in Toulouse.

Boeing didn’t recognize this threat until it fell behind. The redesigned 737, the superb 777 widebody, and the new composite 787 have matched or exceeded Airbus’ technological challenge, as the two firms leapfrog one another to produce better aircraft for their customers, but initial complacency cost Boeing its dominant position. It now commands less than 50 percent of the airliner market, second to Airbus. McDonnell Douglas is history.

Boeing has learned its lesson the hard way and will not make this mistake again. During the 1980s, when the Japanese economy was at its strongest, many experts predicted that Japan would soon dominate industries other than consumer electronics and automobiles. Japan was already building advanced U.S. military jet fighters under license and producing combat aircraft of its own design. Instead of fighting back, however, Boeing wisely reached agreements to use Mitsubishi, Kawasaki, and Fuji Heavy Industries as subcontractors for producing parts of its airliners and then to make them risk-sharing partners in the new 787. In many respects, the new 787 is largely a Japanese aircraft. For instance, the composite material from which the aircraft is made is produced by a Japanese company.

Boeing is doing the same thing in China, acquiring the parts it needs from as many Chinese sources available. Today, every Boeing commercial airliner that rolls off the assembly line carries Chinese-made parts, and Boeing is China’s largest foreign customer for aviation goods.

China does have designs on bigger things. It is building new regional airliners, and the Chinese are eager to partner with others to learn their new technologies. Airbus, for instance, has recently opened a factory in China to produce the A320. Boeing may at some point do the same. But Boeing is fully capable of meeting challenges from any corner. Its only fear should be complacency.

Not any time soon, and not the way people might think

Since it is expected to become the most important market for new commercial aircraft in the next decade or two, China is trying to become a major builder of aircraft. However, she has a long way to go. China’s capabilities in aircraft R&D and engineering cannot yet be considered world-class, and it needs more than financial resources to become a true contender. China’s entire system and approach need a major overhaul. In the aircraft industry, competency and know-how are accumulated over a long period of time and cannot be acquired by simply spending money or building advanced facilities. Even countries with tremendous success in sectors such as automobiles and IT have found it hard to enter the field of large commercial aircraft. Performance, safety, cost and environmental impact are all crucial, and none of these can be compromised.

Nowadays, collaboration among competitors is the norm within the commercial aircraft and engine industry. The cost of development, access to markets, and the distribution of the engineering expertise are the fundamental reasons for this. Both Boeing and Airbus get 50 percent or more of their new aircraft’s components from suppliers based in the USA. For any large commercial aircraft project anywhere in the world, the US will be a major contributor. For example, China’s flagship aircraft program, C919, works with U.S. suppliers for both its airframe components and engines.

Whether building a Boeing or a “foreign” aircraft, U.S. companies will continue to be the dominant suppliers for years to come, regardless of what happens in China.

Wei Shyy is currently Provost of the Hong Kong University of Science and Technology. Until August 2010, he was Clarence L. “Kelly” Johnson Collegiate Professor and Chair of the University of Michigan’s Aerospace Engineering Department.