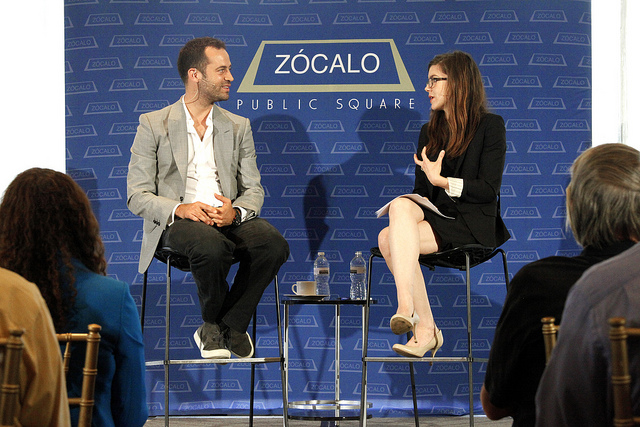 Benjamin Millepied–former New York City Ballet principal dancer, choreographer of Black Swan, and husband of actress Natalie Portman–already loves Los Angeles. “I fell in love with this city the first time I came dancing in this theater, in the early 2000s,” he told a crowd at the Los Angeles Music Center’s Dorothy Chandler Pavilion, at an event co-presented by the Music Center. But his challenge now is to make Los Angeles fall in love with his new company, the L.A. Dance Project, which will premiere at the Music Center in September.

Millepied said that he’s planning to take advantage of both the city’s “vibrant” arts culture and the “sense of liberation” he gets from being in a place where dance isn’t “overly scrutinized or oversaturated.” He’s also excited by the opportunity to collaborate with local dancers, writers, filmmakers, and composers. “This is a great time in Los Angeles,” he said. 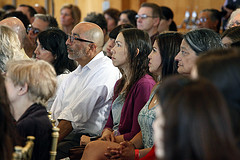 Millepied wants the new company to reflect L.A.’s identity as well as his own. He grew up in Senegal and France, and the first dancing he did–“I started as soon as I could walk”–was African and modern dance. At age 11, he switched to ballet, seduced by American ballets and films like White Nights, starring Mikhail Baryshnikov. In 1992, he came to America for the first time for a summer program at New York’s School of American Ballet. Watching the New York City Ballet perform on opening night “was the most exciting night of my life,” he said. After moving to New York to attend the school full-time, Millepied was taken under the wing of choreographer Jerome Robbins. (Which was a bit like coming full circle: Millepied’s mother, who owned a dance school, began dancing because of West Side Story, which Robbins famously choreographed.)

Millepied went on to a successful 16-year run at New York City Ballet, rising to principal in 2001 before announcing his retirement last fall to choreograph full time, and to move to Los Angeles. “What prompted the decision to retire?” asked moderator Amanda Fortini, a contributing writer for The New Yorker. 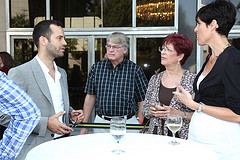 Millepied explained that he started choreographing pieces in 2002 and fell in love with the process but found it difficult to dance and choreograph simultaneously. The ballets he was dancing “were in my body,” and it was freeing to rid himself of the physical memory and to start fresh. At 34, Millepied is young to retire, but he confessed that dancing is more difficult physically now than it was when he was in his 20s. He’s also excited for the greater creative opportunities that choreographing brings, from the ability “to control every aspect of a work I present” to collaborations like his recent “Two Hearts” ballet in New York, with music composed by Nico Muhly and costumes designed by Rodarte.

Millepied is also excited for the opportunity to go beyond ballet with his new company. The L.A. Dance Project was named carefully. “We’re not a ballet company,” he said. “I’m really reluctant to have a name that is already super-committed” to one form of dance. He’s planning to choreograph modern dances that draw from tradition and the history of dance and to revive the lesser-performed pieces of choreographers like Martha Graham and Merce Cunningham.

The L.A. Dance Project will also be incorporating and interacting with other art forms. “If we can be intuitive enough to come up with the right combinations of people, I think we’ll see some exciting things happen,” said Millepied. He’ll begin by dancing at the Museum of Contemporary Art next month for a project he’s been working on with the artist Mark Bradford.

Fortini asked Millepied if he might speak briefly about his first foray into filmmaking and the experience of making Black Swan. What’s it like to choreograph for non-dancers? 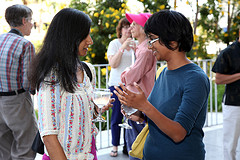 You’re being brought in to solve a puzzle, he explained. For Black Swan, the ballet had to be recognizable as Swan Lake, but it also had to be manageable for the actors. The added movement of the camera was a huge part of what gave the choreography work. Millepied filmed the dancing every day in the studio to try to get a sense of “what looked realistic.” He has since done some directing himself and plans to do more film work with the L.A. Dance Project.

Quoting from an interview with Black Swan director Darren Aronofsky, who said that the ballet world was difficult to penetrate, Fortini asked Millepied if it’s possible to keep one foot in the world of dance and the other in the wider entertainment universe.

Millepied agreed that the ballet world is somewhat closed on itself–but that many ballet insiders declined to contribute to Aronofsky’s film because of ignorance. It was the first time in many years that an interesting filmmaker was tackling dance, and the film has since brought the art many new audiences. “Some people are actually going to go to the ballet for the first time because of that movie,” he said. 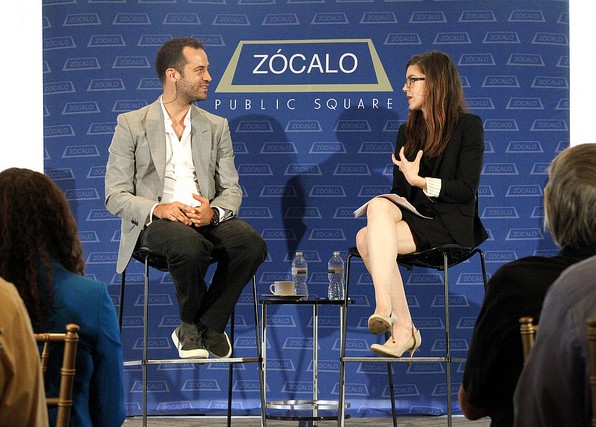