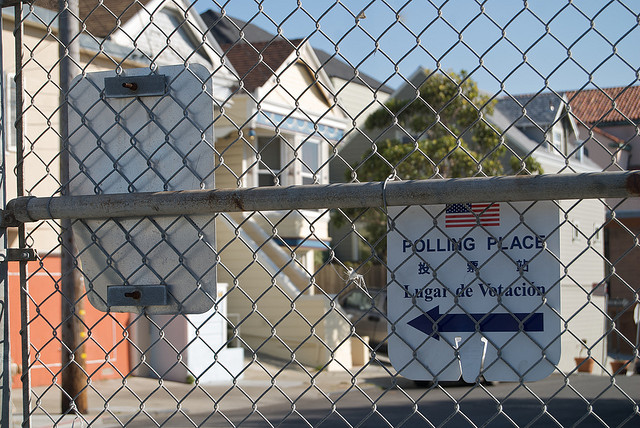 I like to vote late in the day at my local precinct in San Francisco’s Outer Sunset, a middle-class neighborhood. Those few moments before the polls close give me the chance to savor the spectacle of democracy, with the crowded lines of last-minute voters and their attendant Election Day buzz. The lines were especially long in 2008, and just visiting the polls was electrifying, as voters in my neighborhood felt they were participating in a historic election that would end with the first black man assuming the American presidency.

I knew that the June 5 elections wouldn’t produce the same excitement, but I headed to the polls in the early evening with anticipation. Voter participation in my diverse precinct–mostly white and Asian families, with some Russians and a sprinkling of African Americans and Latinos–is usually a pretty good bellwether for turnout in the broader electorate not only for San Francisco but also for California. And the 2012 primary and state races would be the first test of the Golden State’s new method of elections.

Call it California Politics 2.0. In recent years, political reformers convinced voters to pass two major reforms–the first an independent redistricting commission, the second a “top-two” primary in which all the candidates, regardless of party affiliation, run in a free-for-all June race to pick the top two candidates for a November runoff. In this month’s elections, the fruits of these reforms–new districts and a new primary system–debuted.

So at around 7:40 p.m., as I approached my polling place–a neighbor’s garage with voting booths mounted alongside children’s bicycles and gardening tools–I was excited to witness a little bit of history.

Instead, I saw almost nothing.

There was no line at all. The poll workers looked beyond bored. I asked them if it had been like this all day, and they nodded and pointed me to the red electronic counter on San Francisco’s optical scan voting equipment. Those glaring digits show the number of clicks, triggered each time a ballot card is fed into the machine. In most elections, my precinct has about 500 voters by the end of the day. But on this day the number read 159. And since San Francisco had two ballot cards per voter this election, that meant that only about 80 voters had voted. Polls had opened at 7:00 a.m., and a poll worker did the math for me: “That’s about six voters per hour.”

Voter turnout in San Francisco ended up at around 30 percent. That was the lowest turnout in a presidential primary in the city’s history–and still it was higher than the record-low turnout across the rest of the Golden State.

My neighbor’s mostly empty garage proved to be only one indicator that the new reforms weren’t working.

Turnout in elections is the product of competition and a sense that voters have choice. Well-meaning reformers had sold the top-two primary and newly drawn districts as tools that would create competition and choice, as well as elect more moderates and decrease legislative polarization.

None of that came to pass this election. The vast majority of the races in California, whether for federal or state elections, showed zero difference from the old system: no competition at all. But perhaps even worse were the handful of seats that weren’t snooze fests; in those races the top-two primaries created perverse results that ran contrary to the choices of voters.

In U.S. House District 31, a liberal-leaning district around San Bernardino where 49 percent of residents are Latino and less than 30 percent white, two white Republican candidates finished in the top two with low vote percentages. The problem was that the Democrats ran too many candidates–four Democrats split the liberal vote against only two GOP candidates. The lead Democrat missed the runoff by only 1,500 votes.

In California’s 51st U.S. House district in San Diego, a strongly Democrat district, the lead candidate–a current Democratic state senator–spent nearly $50,000 in support of a penniless Republican opponent to prevent his strongest rival, a fellow Democrat, from making the November election. The ruse worked, and now the Democrat will soundly trounce his Republican opponent in the runoff.

These are just a couple of the manipulations and strategies that were deployed to game the top-two primary. In a number of these races, if fewer candidates had run the results would have been different. It’s a roll of the dice to see who survives what might be more accurately called the crapshoot primary. In future elections, political party leaders will quickly figure this out and begin discouraging candidates from running to avoid splitting their parties’ vote. Political machines will gain even more influence.

The new system also diminishes choice. In some of these races, the crapshoot primary resulted in two candidates from the same party finishing one-two and facing each other in a November runoff. In those races–28 of the 153 seats at federal and state levels–the narrow choice for voters will be to pick which flavor of Democrat or Republican to elect. Minor parties, long an integral part of California’s political tradition, have been completely wiped off the November ballot.

Even in the face of these peculiar results, advocates of the crapshoot primary have mounted a media campaign to defend it. On June 7, Dan Schnur of USC’s Jesse Unruh Institute claimed in the Los Angeles Times that two candidates from the same party running against each other in the November runoff will “push candidates to the middle” where they can attract voters “from the other party as well as their own.”

If he’s right, that’s little more than a formula for political mush. But it’s more likely that the top two won’t change how a legislator acts in office–because most of these same-party runoffs fall in safe seat districts. Sure, Congressman Howard Berman, a Democrat, is angling for the GOP vote in his San Fernando Valley district to beat his November opponent, Congressman Brad Sherman, also a Democrat. But is a victorious Berman really going to change his spots once in office? Hardly, since he wants to be re-elected in his heavily Democratic district.

So what would change our politics–and draw voters to the polls? California needs to adopt reforms that have a record of success in other states and countries. Proportional representation would result in true multiparty democracy and representation across the spectrum, including moderates. Ranked choice voting, which gives voters a first, second, and third ranking, would prevent the weird vote-splits created by the crapshoot primary and create incentives for broad coalitions. Public financing and free media time for campaigns would help counteract the boost that big donors received after the U.S. Supreme Court’s Citizens United decision.

After leaving my polling place on election night, I made the rounds of various campaign gatherings. Most of the politicos and insiders were relieved that nothing unexpected had happened. Indeed, in the Bay Area, Democratic incumbents such as Nancy Pelosi, Barbara Lee, Mark Leno, and Tom Ammiano all finished so far ahead of the competition that there’s no doubt about who will win in November. While many of those expressing satisfaction with the results were friends of mine, they also were party apparatchiks with little interest in reforming the system. The fact that they were happy was not a good sign.

Indeed their happiness–and June’s historically low voter turnout–should be a wake-up call. It’s time for Californians to get serious about political reform.

Steven Hill is the former director of the political reform program at the New America Foundation and author of 10 Steps to Repair American Democracy: 2012 Election Edition and Europe’s Promise: Why the European Way is the Best Hope in an Insecure Age.