Ali Prosch investigates modes of female representation through her work in video, installation, and performance art. A 2009 MFA graduate of CalArts in Valencia, she has exhibited at national and international venues including Redcat, Smithsonian Hirshhorn Museum, The Museum of Contemporary Art Miami, Fred Snitzer Gallery, The Company, White Box, and Tomio Koyama Gallery.

In our interview at her studio in Los Angeles, Prosch discussed three recent videos, “Fall,” “Tossed,” and “Ground.”

Q. How did you come to the premise for your video “Fall”?

A. I was making imaginary flying devices at the time–simultaneously thinking about the body in motion, falling, and flying. I decided that the only way I could figure out how to fly was to fall, and there’s that split moment in a fall where I’m flying!

Q. So you really had to practice falling?

A. I worked with a dance teacher, and she taught me how to fall in an elegant, graceful way. But I wanted “Fall” to appear authentic and almost comical, like Charlie Chaplin kicking his foot out to launch himself into the air. When I made the piece, there were definitely better falls than others, and the good ones actually hurt the most.

Q. Can you describe the various costume changes?

A. I go through outfits in between takes. My work is always dealing with representations of women. I was thinking about the multiple roles of being a woman and also the personas people move in and out of on a daily basis.

Q. Women in comedy still seem like too much of a rarity in the world. What does humor offer in terms of your interest in feminism?

A. It allows me to discuss the problems I find in the world without forcing the viewer to directly carry that burden. I definitely don’t want to dilute an issue by using humor, but it can make things more accessible. I mean it’s really a psychological strategy, and a coping mechanism, and for me the best way to touch upon taboos and stigmatizations in American culture.

Q. The comedy largely comes in relationship to your own body. It’s a strange place to work from, as both the producer and performer. That tension seems important.

A. The ideas in my work are generated from personal experiences. And in my practice it makes more sense to use my own body rather than hiring an actor. I get stage fright, which surprises people because I’ve done some crazy performances, like humping castles when I was traveling all over England. I don’t really know how to detach myself from my experiences, but I think that energy is conducive to the work.

Q. In “Tossed,” I really feel like I’m watching a personal experience and not a performance. Your gaze is so fixed and unflinching and unavailable to an audience.

A. I just toss a salad–lettuce, cabbage, and chard fling up and across the frame, over and over again. My intention was to pull a mundane gesture from the everyday and transform it into something that is mesmerizing. I realized I had to push the character into a strange psychological space for the piece to work. Something really magical happened by not blinking. I removed myself from being looked at as the object.

Q. There’s also all this cabbage whizzing by that you seem maniacally oblivious to. You disengage not just as the object of the viewer’s gaze but also from the physical world.

A. I went into the void! The use of repetition is important. Formally, there is a push and pull that I think really draws the viewer in. And repetition seems very relevant given that our contemporary world is so much about appropriation, recycling, looping, obsolescence.

Q. Right, that repetition really gets at an aesthetic of failure. But your willfulness there is pretty hypnotic too.

A. A lot of the new work explores futility. It’s getting pretty existential. But I think it’s also very much about seduction. 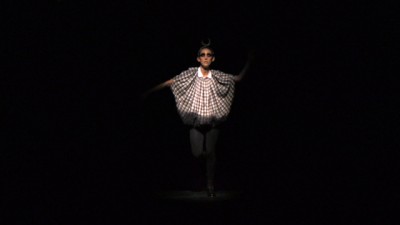 Q. How do you think about using the camera in relationship to the experience of performing?

A. I strongly believe there is a difference between the bodily experience and just simply viewing an event on a monitor or screen. On a social level, what is our capacity to use our imaginations, to fill in for the things that we cannot see? If every detail and nuance are handed to us via cgi and graphic manipulation, how does this affect our minds? I’m interested in extending the suspension of disbelief through various editing techniques–analogue and do-it-yourself strategies. For example, in my new video “Ground” I create the illusion of tap dancing myself into the ground. There are several shots in which I use non-sync sound, or sync-sound with no image, in order to push the viewer to fill in what they cannot see with their minds. 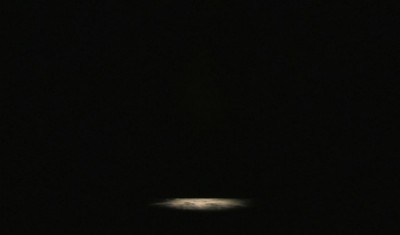 Stephanie Washburn is an artist based in Ojai and Los Angeles and a lecturer in the Department of Art at UC Santa Barbara.