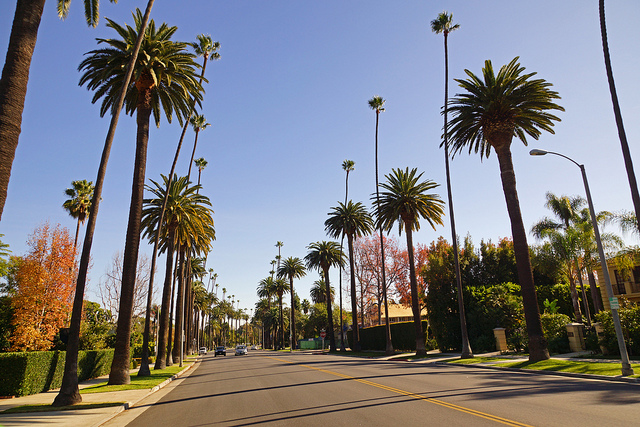 When my family moved to the San Fernando Valley from the East Coast, in 1965, my mother told the realtor she wanted an older home. The oldest they could find was a 1950s ranch-style house in Studio City. It had a backyard with a pool and bottlebrush and pomegranate trees. You could often find a giant bottle of Inglenook Chablis on the patio table.

By 1976, when I was eight years old, my parents realized it was cheaper to buy a house in a better school district than to keep sending three kids to private school. Beverly Hills had good public schools and Spanish-style homes from the ’20s. They settled on a Spanish-style house at 438 S. Rodeo Drive, south of Olympic Boulevard, and, not long after buying it, took us to see it. It didn’t look 1920s. There were white shag carpets, sliding glass doors, and heavy gold paint everywhere. And no pool! What were they thinking?

By the time we moved in, the house had changed a lot. Goodbye, shag carpet; hello, dark wood floor. Goodbye, sliding glass; hello, French doors. Goodbye, gold; hello, white. The house was done up in 1970s style, and our dining table was a giant redwood trunk with a thick piece of glass on top. The couches were huge and overstuffed, with deco lines and gray flannel upholstery that was always at risk from kids and dogs. I loved the kitchen. It had two wall ovens. Two! Homemade beef jerky going slow in one while dinner cooked in the other. The counters had a built-in motor for NuTone appliances, but the previous owners had made off with the attachments, so my friends and I found a new use for the motor, putting our fingers on it and running it faster and faster in a game of chicken.

The new house, now restored, was better suited to the tastes of my parents, who both came from the East and were used to older residences. My dad, a New Yorker by birth, was an on-screen character actor and voiceover guy. During the ’70s and ’80s you couldn’t go a week without seeing him on TV or hearing his voice on the radio. My mother grew up in South Carolina and then went to Parsons School of Design in New York in the early ’50s. Some time during those years she met Jasper Johns, who drew some sketches of her. (She was fond of saying, “If I’d known he was going to be ‘Jasper Johns’ I probably wouldn’t have thrown them out. Oh, well.”) She was a costume designer, mostly for plays and movies, and I loved going thrift (not vintage) shopping on Melrose with her.

Beverly Hills in the mid-1970s was no longer a small town, but some of that atmosphere remained. You might see Mel Tormé at Food King on Cañon or Fred Astaire at the post office on Santa Monica. Everyone went to the same dentist, and all the birthday presents came from the same toy store (you knew it by the wrapping paper). The women at Saks knew my mother’s name (“Hello, Mrs. Oppenheimer”). We walked to school with our friends and stopped at Castle Liquor for candy. We roller-skated through Century City, past the Shubert Theatre and into the mall. You didn’t need money at either the Century City Gelson’s or Owen’s Market on Pico. They’d look up your family’s account on the Rolodex and send a bill.

I was lucky with playmates. My best friend lived directly across the street. Four other pals lived on my block. Another four lived on the streets on either side of ours. We’d play out in front of the house, roller-skating up and down the streets–from Pico to Olympic–and the only thing we had to worry about was falling. We’d take the bus to Westwood or walk up into the shopping area alone. It all felt very safe.

My brother, the oldest of us kids, started at Beverly Hills High in his junior year, my older sister as a freshman. In an amazing show of sisterly love, she’d let me, seven years younger, tag along with her and her friends after school. We’d go to the Clifton’s Cafeteria in the Century City Mall. Or she’d take me to 99-cent double features at the Lorraine Theater, where we saw Singin’ In The Rain and Seven Brides for Seven Brothers. Sometimes we went to Flippers Roller Rink at the corner of Santa Monica and La Cienega.

When you compare it to now, the pressure to be “cool” or “in” back then was negligible. MTV, which came along a few years later, changed things. Trends used to be confined to neighborhoods or regions. But MTV made them global. Suddenly, you had to have the right pants, right shoes, right purse.

I started at Beverly Vista, one of the four elementary schools, in third grade. We used to say that the snobbiest kids went to Hawthorne; next up was El Rodeo; and then Beverly Vista. The “poor kids” went to Horace Mann. Yes, I know: ridiculous. Beverly Vista had a mix of incomes–from single parents living in apartments to families in houses (some fancier than others). I don’t think anyone wondered where their next meal was coming from, but I know that some of my friends didn’t have as much extra income as some others.

As small-town-like as Beverly Hills felt in my day-to-day, I knew about its reputation in the wider world. Giving my address to fellow campers at the end of the year always felt pretty awkward, especially the “Rodeo Drive” bit. And saying, “Oh no, not the fancy part! We’re south of Olympic!” didn’t carry much weight, either.

That I lived in a very wealthy part of town became much clearer in high school. You’d see classmates get new BMWs for their 16th birthdays. The troubles kids got into were fancier, too. Half the girls were getting pregnant (and then un-pregnant) or acquiring eating disorders or doing cocaine. But one thing I appreciate now is that Beverly Hills High put such a strong emphasis on academics. This was true not only of teachers and staff but of other students as well. Being smart was cool. Sure, if you had the right clothes, car, or drugs, being stupid would work too, but smart was best.

One change to the city was a big influx of refugees (albeit very wealthy refugees) from Iran after the revolution of 1979. The adults in the neighborhood took more of an interest in it than we kids did, and some of those adults took a dim view of the gaudy new mansions that were getting built amid streets of little bungalows. As kids, though, we didn’t really see much to care about. At Beverly Vista, if we weren’t going to be friends, it wasn’t because you were from Iran. There were way more important reasons not to be friends–such as liking Rush instead of Journey.

High school was different. A lot of the Persians from the other elementary schools were competitive and cliquish, and non-Persians weren’t let in easily. You’d hear a lot of Farsi in the halls, along with new colloquialisms like “Fuck you, you fucking dude fuck” delivered in noticeably foreign inflections. There was an “us-against-them” attitude that went both ways, and the cultural interplay could get pretty odd. One girl had a wedding during the spring break of her junior year. It was an arranged marriage. But in a tribute to her Beverly Hills lifestyle and the 1980s, she wore a white leather wedding dress from North Beach Leather on Sunset.

Recently, Beverly Hills lost a fight to prevent the Los Angeles subway system from tunneling under Beverly Hills High School, but the resistance to the project was characteristic of a place that has always had a bunker mentality when it comes to the rest of world. Its residents fought hard to stop a 101-to-405 connector freeway that was supposed to bisect the city roughly along the path of Santa Monica Boulevard. The freight lines that once ran down Santa Monica Boulevard ceased operation in the 1980s. Beverly Hills residents pay a premium to live there and go to school there, and they don’t want it to be disrupted. Most of the time, they get their way.

My parents sold the house on Rodeo decades ago. Today, I live in East Hollywood, and, as much as I loved growing up in Beverly Hills, I can’t imagine ever living there again. The Westside feels different to me now. There’s more traffic, more attitude. Besides, I’m nostalgic by nature, and no one wants to be with the woman who says, “Oh, that’s where Camp Beverly Hills used to be.” That’s almost as much of a nuisance as a subway tunnel. So my departure should probably be considered a gift to my old hometown–that once–wonderful, and maybe still wonderful, place to be a kid.