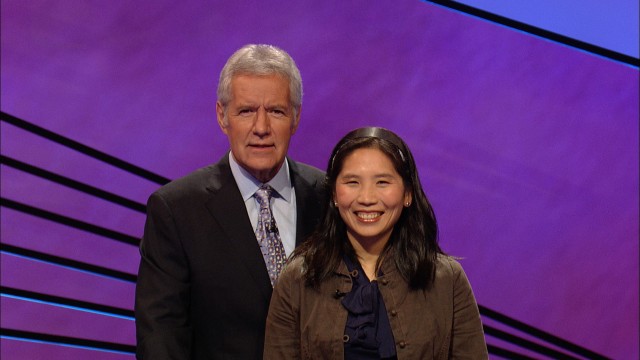 My quest to get on Jeopardy! started as a joke, but here I was at a theater in the Sony Pictures lot in Culver City watching people trot gleefully on stage, two by two, to take on the returning champion. Keeping my mouth shut in the studio audience was killing me. But the contestant coordinators give priority to out-of-towners, and all I had done was drive to Culver City via four freeways. For the last taping of the day on February 15, 2012, it was either going to be me or a guy from Santa Monica in a tailored suit.

Then they pulled my name out of the hat, and I pumped two fists in the air. I hurriedly told the other guy, “Sorry,” and bounded out of my red velvet chair. It felt so unreal to hold the game clicker in my hand that I couldn’t help but press the blue button over and over as they adjusted the lift under my feet to make my head level with the other, taller contestants.

When I got a look at the game board, I thought, Uh-oh. The type on the clues was so small, and my eyes, fitted with -6.50 contact lenses, had to squint. Alex asked the returning champion to pick the first clue.

I was a reporter at the Los Angeles Times during one of the roughest stretches of the paper’s history. As I watched reporters next to me get laid off, I joked with colleagues that if I got laid off I’d go try out for Jeopardy!. Then I thought, “Why wait until I get laid off?” Friends had been refusing for years to play Trivial Pursuit with me, and I got a lot of the Jeopardy! answers right when I shouted at the TV.

Getting an audition took longer than I expected–a couple of years, in fact. When the day finally arrived, on October 17, a few months after I’d given birth to a baby daughter, I showed up at the Doubletree Hotel in Culver City in the first nice clothes I’d worn in months. It felt like a job interview. There were about 20 people there, mostly in the 30-to-50 age bracket. I was the only woman.

We had to take a 50-question quiz. Then we got to play some practice games with the clicker. “Hit that clicker multiple times,” the contestant coordinator told me as I failed to ring in most of the times I knew the answer. When I successfully clicked it right I was so surprised that I wasn’t sure I knew the answer. Er, what is … Prussia? Yes, that was right!

I learned about my fellow competitors as they interviewed each of us for personal stories. There were lawyers and real estate consultants and bankers. One guy talked about proposing to his girlfriend because she complained he hadn’t proposed yet. One guy boasted that he had bowled a game one pin shy of perfect. The next guy said he had bowled several perfect games and had gone pro.

At the end of the audition, we were told we could have to wait up to 18 months to see if Jeopardy! was going to call. Meanwhile, I watched the show every day with a clicker pen in my hand for practice. Little did I know then what the odds really were. One hundred thousand people a year take the online test; 3,000 to 4,000 are called for an in-person interview. Four hundred are picked to tape a show.

The contestant coordinator called in mid-January for a February 15 taping. I realized I should have been studying at that point instead of reading blog posts about former contestant Roger. I felt I had English and American literature, American history, space, newspapers, and pop culture covered. I was weak on European history and baseball. When I told this to one of my friends, she said, “Baseball is such a big subject, so what kind of baseball questions would they ask?” I said, “Maybe they’ll have a category like ‘Baseball Teams by Stadium.’”

To patch up my weak spots, I emailed my friend Dave for the 10 most important baseball players, read player bios on Wikipedia, and watched Moneyball. I also borrowed a European history textbook but never made it past the Age of Pericles. The day before my taping, I realized I didn’t know the difference between Bloody Mary and Mary Queen of Scots, so I studied the English monarchs on Wikipedia. Then, unable to cram any more facts in my head, I watched a Saturday Night Live parody of the game show.

I got caught in traffic on the 10 Freeway on my way to my taping. Maggie, who oversees the contestant department, called my cell phone. “I’m turning onto Culver Boulevard,” I said on the Bluetooth. “The locals are always late,” she said.

I showed up nervous and unsettled, but, hey, at least it was the first night in a couple of weeks that my daughter had slept more than six hours at a stretch. I almost felt normal! I quickly filled out tax documents, signed a form saying I wasn’t colluding with other contestants or the producers, and came up with a lame “hometown howdy,” a taped invitation to watch Jeopardy that could be played on the local ABC network of the contestant’s hometown.

We got to practice a few times on stage. I rocked a category called “What’s for Lunch?” But I was also having some trouble clicking in at the right time. You have to get it just right–after host Alex Trebek finishes reading the clue and lights flash on either side of the game board, but before the other contestants buzz in. If you buzz in too early, you’re locked out for a few seconds.

In between tapings, members of the audience were allowed to ask Alex questions. I learned these things about Alex: he likes to fix things around the house in his spare time; he once drove a huge RV with a car hitched to it; he never gets a beer with contestants; he sometimes makes suggestions about the categories for play; he doesn’t remember every episode but does distinctly remember comedian Jon Lovitz getting an answer wrong and saying “Exactly” when the correct answer was read; he uses his broadcaster voice even when he’s off-camera. I also learned that Johnny Gilbert does the “This … is … Jeopardy!” intro fresh for every show.

During the other games, I was whispering the answers to myself. Damn, I thought, as a question about the Brontës was asked. I would’ve gotten that one.

When I finally got on stage for my turn, the adrenaline was pumping. I couldn’t believe my eyes when I saw that one of the categories was … “Baseball Teams by Stadium.” I picked it, and I actually got the first and the last clues right. (There was an unbroadcast pause during that last clue in which staffers had to take a few minutes to check that my answer–“Tampa Rays”–was an acceptable form of the team name.) Another category, “Historic Days of Our Lives,” turned out to be soap opera characters reading clues about history–often European history. Matt from Pittsburgh, the contestant next to me, got a Daily Double clue about what Catholic country Mary I’s husband Philip was from. I was dying because I had just read about Bloody Mary on Wikipedia the night before.

I did get some answers I was particularly proud of, including a Daily Double question about the Milky Way. I was also chuffed that, in response to a clue that required you to stitch together two phrases, I got to say, “What is Fight or Flight of Conchords?”

I had a lead going into the first commercial break and traded first place with Matt a few times, but it was over pretty soon after the Double Jeopardy round started. I consoled myself by blaming my subpar clicking skills. But Matt not only had clicker voodoo; he also knew all the answers. He had the science-fiction category “Lunar Fiction” all to himself, for instance. (“If it was lunar nonfiction, I would’ve had a better chance,” I told myself. Damn.)

The contestant coordinators say that the outcomes are often luck of the draw. The categories are picked at random, and your fellow contestants are also picked at random. Oh sure, I would’ve liked to have won at least one game, but I walked away with a respectable second prize of $2,000, plus a free lunch complete with the Sony Pictures cafeteria’s “spa water,” a Jeopardy! tote bag and a hat that said “Get a clue!” The prize money wouldn’t have made up for being laid off, but it was enough to pay for part of a recent vacation to Italy.

In my hometown howdy, I joked about finally getting my 30 minutes of fame. But I’m actually relieved I can go back to my living room and shout answers at the TV again. At home, I’m always the returning champion.