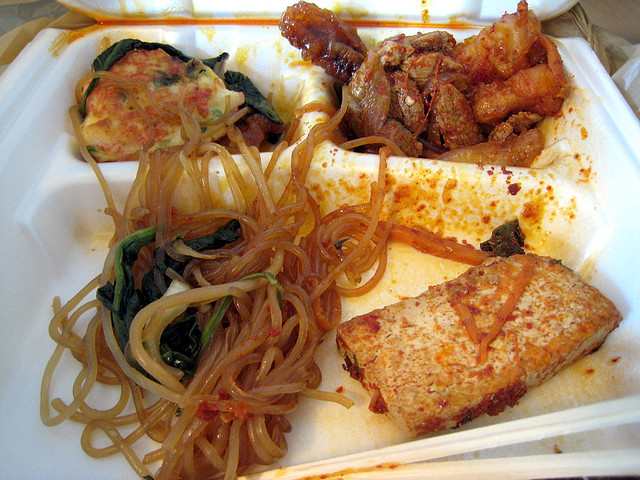 Newark, New Jersey, where I’ve worked for almost 40 years, will never be a destination for foodies. Even Brooklyn, which just completed its looting of Newark’s NBA franchise, the lowly Nets, has more to offer. But Newark boasts a number of decent if redundant Portuguese and Spanish restaurants throughout the Ironbound section, and several mediocre pubs have sprung up near the Prudential Center, where the Devils play. My two law partners and I frequent these eateries in an informal rotation, which gives us a break from work at our small commercial law firm. We do bankruptcy work, so people assume that business is good these days, but both debtors and creditors share a reluctance to pay their attorneys. That’s one reason I like a vodka martini before lunch.

Except on Mondays. Monday is the day to repent for the alcohol and food excesses of the weekend. That’s when we go to the Raymond Food Court or, as we call it, the Buffeteria. Only one of us three partners likes the Buffeteria, and that partner is not myself, but office harmony requires that we accommodate him. Three-day weekends, which eliminate Mondays, also eliminate a trip to the Buffeteria. I appreciate them more than ever.

The Buffeteria consists of three large buffet tables, one hot and two cold. Everything is $5.95 per pound. In better economic times there was also a sushi bar with a server in faux Japanese attire, but that folded as suddenly as Lehman Brothers. The grill and sandwich section, once manned by the cheerful Chef Hampton, who never saw a woman upon whom he would not hit, has been replaced by a less-expensive teriyaki station. I could not resist the invitation of an attractive Asian waitress to try the teriyaki chicken once, despite the risk to my colon from such exotic fare, but that was enough to satisfy any craving for the mysteries of the Orient.

The rest of the food choices are the same as in any pay-by-the-pound buffet in the tri-state area: overcooked vegetables, heavily dressed salads of all kinds, a selection of fresh fruit, and chicken, pork, and shrimp bathed in enough glutinous sauce to remain edible during a two-hour stay on the steam table. I’ll admit that the fruit selection is impressively large.

My younger partner, who periodically tries to stay on the Atkins diet, is the force behind our visits. He enjoys the absence of breadbaskets, around which, in ordinary restaurants, the rest of us must build a wall in order to restrain him. At the Buffeteria, he fills his plastic dish with hills of salad, faux crab legs, and tuna fish; to this he adds the daily mushroom special (sometimes sautéed, sometimes stuffed). My older partner, whose appetite has waned since he turned 70, sticks to walnuts, melon, and some type of overcooked fish. I cope with the stressfulness of so many choices by making the same selection every Monday: a mixed green salad, a piece of roasted turkey thigh, a few boneless spareribs, cashews, some papaya, and a diet peach Snapple.

There are plenty of free tables from which to choose. We usually sit at a rectangular table for six, since it offers plenty of room to stow our trays. The other customers include partners in large law firms, corporate employees, and homeless people who make their selections but bypass the cashier. On one crowded Monday, an elderly toothless woman with dubious hygiene joined our table. She ate a plate full of shrimp, belched, and went on her way. I did not finish my lunch that day. But the following Monday we were back.

Lunches at the Buffeteria are not time-consuming. There is no prolonged conversation. These are additional drawbacks, since I’m rarely in a hurry to return to the wheels of justice. Twenty minutes after our arrival, the three of us play our daily game of liar’s poker (all the proceeds go to a New York steakhouse dinner pot), and then it’s back to the office at 50 Park Place. I’d be happy never to dine at the Buffeteria again, but I suppose it has some redeeming qualities. Forgoing the martini proves to me I’m not an alcoholic. And the fresh fruit really is quite good. Not that I’d ever miss it.

Jeffrey M. Rothbard is a partner in the law firm of Rothbard, Rothbard, Kohn & Kellar and rarely misses lunch. He is also the father of Zócalo’s managing editor.