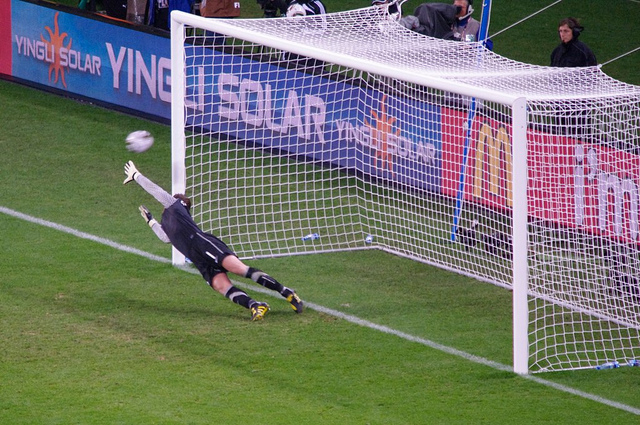 So much for the idea of the summer doldrums. July has instead been a month to reevaluate our most basic assumptions and beliefs. Higgs boson explains the universe! TomKat over! Fatalism and serendipity torpedoed globally!

Wait, you say, what’s that about fatalism and serendipity taking a hit? No, I’m not talking about the Libor scandal. Didn’t you see? FIFA, soccer’s global ruling body, announced that at long last it will allow the deployment of goal-line monitoring technologies. International soccer has taken the whistle out of the referee’s hands and entered the 21st century; sensors will now ascertain whether the ball has crossed the goal line or not. The sport will never be the same.

Like plenty of other legacies shaping our modern world, this development can be traced back to quarrels between English and Germans. In the 1966 World Cup final, the referee awarded the tournament-winning goal to Geoff Hurst, whose shot hit the crossbar and then struck the ground below without appearing to have fully crossed the goal line. Forty-four years later, in a 2010 World Cup second-round match between these same two powers, the refereeing gods (or rather the refs hustling to keep up with the action from dozens of yards away) evened the score by denying English captain Frank Lampard what appeared to be a clear goal to millions of TV viewers worldwide. In the final straw for FIFA, the English team (what is it with them and controversy?) benefited from a blown call in last month’s Euro Cup in a match against host nation Ukraine. And so, on July 5, after years of insisting on the purity of the “human factor”–no instant replay, no review of contested calls, no ball-tracking technologies to make for better TV–FIFA caved and agreed to allow the use of the type of sensors tennis and cricket already rely on.

Mark this moment as a historic milestone in the global decline of serendipity and “que sera, sera” fatalism in favor of American-style controlling exactitude.

There are no accidents in the United States, a Mexican friend in college once told me, an observation I find more astute with every passing year. What he meant wasn’t so much that we Americans don’t trip and fall, or get into car crashes, but that every such incident is obsessively analyzed and litigated in order to get at its root cause, apportion blame, and prevent its recurrence. So in America, people don’t just happen to trip; it’s the cities that fail to properly maintain the sidewalks. Playground injuries don’t just happen because kids are kids; it’s that parks fail to install cushiony surfaces. Stocks don’t just fall or rise of their own accord; some ostensibly rational reason must explain their day-to-day movements.

There isn’t any misfortune or ambiguity that Americans can’t have a court, a blue-ribbon commission, an inspector general, a team of investigative reporters, an accounting firm, a law firm, or a conclave of referees conduct a ruminative post-mortem on, so as to explain, rationalize, and contain, in retrospect.

“Stuff happens” may be an idiomatic expression, but it’s purely an ironic one; the sentiment is not part of the American creed. We don’t shrug things off as a society. It’s a component of American exceptionalism that’s both admirable and aggravating.

Or at least it used to be. FIFA’s big news is one more sign that the rest of the world is catching up, emulating our American disdain for capricious fatalism. Our own version of football has become a case study for our societal inability to let life play itself out in real time, warts and all. NFL games now resemble legal battles in which the game (call it the evidentiary record) is frequently interrupted for review as coaches strategically deploy their challenges to calls made on the field, ever mindful of the burden of proof. Lawyering has become a big part of the game.

America’s difficulty with just “going with the flow” (another favorite expression that’s at odds with our national character) and accepting that “stuff happens” doesn’t manifest itself solely in this lawyerly zeal to get at the “truth.” It also manifests itself in our obsessive zeal to quantify, and catalogue, all things as they happen. Hence our worship of statistics. Millions of Americans now pay less attention to actual NFL games than they do to derivative markets created around them–fantasy football–that turn Sunday afternoons into a statistician’s dream. Baseball, to be sure, has been almost as reluctant as soccer to incorporate technology into its officiating, with fans tolerating a decidedly un-American subjectivity when it comes to defining strike zones. Then again, the game’s true purpose seems to be the production of crunchable data–no more so than in this Moneyball era. (What happened to Babe Ruth? The last great baseball film celebrated a management team’s devotion to obscure numbers.)

Soccer may be taking off in this country, but its roots will always remain suspect, reflecting alien, fatalistic traditions. The game’s very fluidity defies the creation of discrete episodes amenable to endless review; there’s not even a sensible way to break for TV commercials. The game is all serendipitous flow, and, sometimes, it’s all about frustration. Some games are fated to end 0-0 because the sport reflects the values of places where life is hard and can’t be conquered, where the default assumption when things go badly isn’t to find out whom or what is to blame. Soccer has traditionally been a statistician’s enemy. So much running around, so little data. But that’s changing under American influence. TV coverage now reports on the number of corner kicks for each team, assists for each player, time of possession for each team, and other stats that hardly anyone used to care about.

It isn’t that Americans were alone, or even at the forefront, in clamoring for soccer to adopt goal-line review technologies. But the pressure from fans around the world for FIFA to abandon its aversion to technology in pursuit of certainty reflects a growing Americanization of global attitudes toward fate, happenstance, and our ability to control the elements. It also reflects a market-based perspective that the stakes have become too high to tolerate human officiating error as one of the game’s charms. There are too many multi-million-dollar deals at stake, not to mention that British-versus-German antagonism.

Michel Platini, the former French midfielder who exemplified the artistry of uninterrupted flow on the pitch and is now the head of the European soccer federation, was adamantly opposed to the adoption of goal-line monitoring–and often portrayed as a Gallic Luddite for his refusal to go there. He insisted on retaining the human factor. World Cup matches would use the same rules and reviewing technologies (which is to say, none) as games in Rio favelas. All part of the flow of life, warts and all.

Platini understands the difficulty of restraining yourself once you start using technology to review and control all aspects of life. Only goal-line decisions will be reviewed, FIFA is assuring everyone; they won’t go crazy monitoring offside calls and obsessing about the evidentiary record for other purposes. Sure they won’t. At least not until they realize the stakes are too high not to.

Andrés Martinez is the editorial director of Zócalo Public Square and a vice president at the New America Foundation.