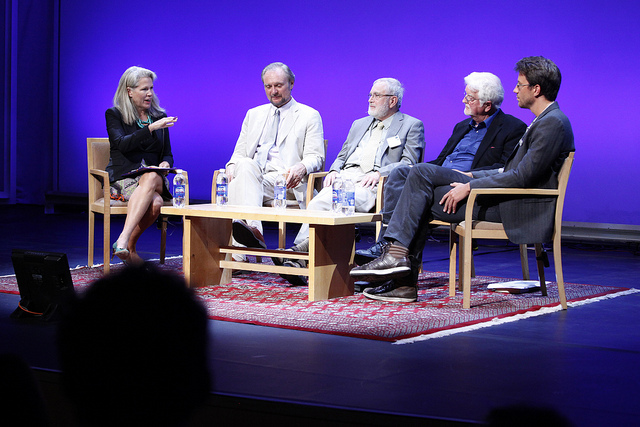 Where’s heaven? What’s it like? Who gets in? And what tortures await those of us who land in the alternative destination?

Scholars of religion, history, and art asked these questions during a panel discussion at the Getty Museum, in which they explored the ways different societies have imagined and depicted the afterlife and what the images we create of heaven and hell say about life on earth.

Producer and documentary filmmaker Jody Hassett Sanchez opened the conversation by asking UCLA Buddhism expert Robert Buswell where, according to the Buddha, the heavens are located.

“There are many different heavens in the Buddhist system,” said Buswell–as many as 27. But they don’t have a geography: the heavens are a level of rebirth, like existence as a human being or an animal. In fact, going to heaven is “kind of a consolation prize” for Buddhists. The real goal is to experience nirvana, which can’t be located, measured, desired, or experienced. 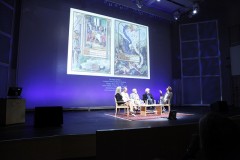 In medieval Christianity, heaven is above, while hell is below. There’s an opposition between going up and going down, said Martin Schwarz, the curator of the Getty exhibition “Heaven, Hell, and Dying Well: Images of Death in the Middle Ages.” And while hell is usually depicted with a lot of detail in medieval art, heaven is shown with much less specificity–it’s not in one particular place.

On the other hand, for Native American tribes of the West, heaven was something very literal, said UCLA anthropologist Peter Nabokov. In Pueblo Indian society, there is no idea of sin, so everyone gets into heaven. A picture of heaven he found contains a certain number of trees, a pile of dead rabbits–for an imminent feast–as well as corn being harvested. In heaven, your ancestors are also waiting for you.

Quoting Belinda Carlisle–“Heaven Is a Place on Earth”–Hassett Sanchez asked UC Santa Barbara religion historian Jeffrey Burton Russell about whether heaven and earth ever come together in the Judeo-Christian tradition.

“Heaven is where God is,” said Burton Russell. The location is beyond space and time, however. Up until the 1600s or 1700s, Christians believed quite literally that you traveled up to heaven–via a ladder or stairs, or circles as in Dante’s Divine Comedy. And even though Dante described hell specifically, he used metaphor to describe heaven. Heaven, said Dante, was beyond language.

Even medieval artists, in depicting heaven, did it in a way that showed that it lies outside human perception–viewing it through a window or even choosing to hide it behind a wall, explained Schwarz.

In Buddhism, said Buswell, there is a physical body in some heavens, but in higher levels of heavens there is no physical embodiment. You can’t even try to paint these heavens. 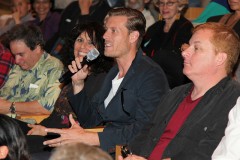 Nabokov brought the conversation back to earth. “I’d like to introduce a little history and reality into all this conceptual talk,” he said. “For colonized people around the world, the 19th century was the end of the world.” For Native Americans in California and indigenous people around the world, the 19th century was a hell on earth, and their visions of heaven were those of release from mass murder and disease. In California, Indians came together in earth lodges and prayed for the world outside to be cleared of white people and hogs (who ate the acorns), for the land to be re-carpeted with wildflowers, and for those who had been killed by disease to return. These “very concrete, very practical cosmologies of what heaven on earth would look like” were developing all over the world at this time, according to Nabokov.

So how does one get into heaven, anyway?

While today we desire a quick and painless death, for a medieval Christian, said Schwarz, a quick death was the worst thing, because you couldn’t prepare for the afterlife.

In the Christian tradition, said Burton Russell, if you’re a sinner and you repent–even at the moment of death–it’s enough to get you into heaven.

In Buddhism, the process of death involves “very elaborate visualization exercises,” said Buswell. These can take up to 40 days, as a person is guided through rebirth.

Before turning to the audience for the question-and-answer session, Hassett Sanchez asked the panelists whether our fixation today on living well rather than dying well is a luxury. Do other cultures, past and present, think of the afterlife differently because their life on earth is so difficult? 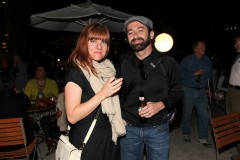 Said Burton Russell, “It is indicative of our modern society that we tend to think of ourselves as individuals divorced from the rest of people.” Today, we see death as being far into the future–we try to have fun on earth to avoid it. But living a good life, in western religion, is not about having fun–it’s not the point.

In the question-and-answer session, the audience asked the panelists to talk more about the intersection between religion and history. How did the plagues of the Middle Ages affect people’s conceptions of heaven and hell?

After the Black Death in the 14th century, said Burton Russell, you saw more terrifying and immediate representations of death. The image of the skeleton, said Schwarz, is often related to the plague.

Have horrifying images of hell been used throughout history to keep people under control?

In the middle ages, said Schwarz, people paid a lot of money to commission books full of beautiful but terrifying paintings of hell. In Buddhism, said Buswell, there are very elaborate depictions of suffering in hell to encourage good behavior. 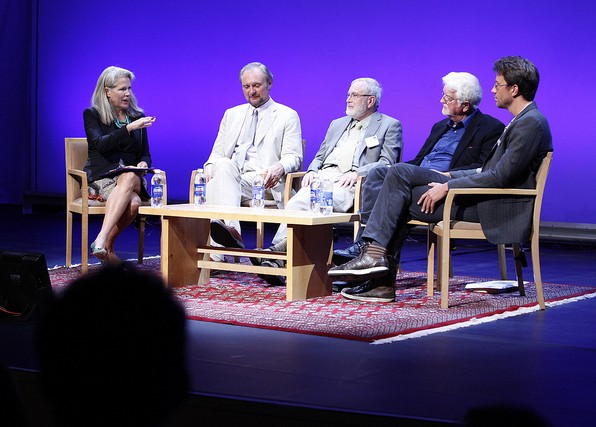